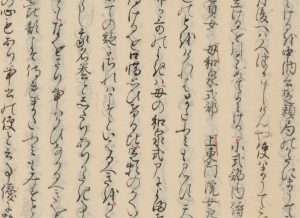 A skeleton; such is the final wreck of a beauty

gaikotsu ya kore mo bijin no nare no hate

1. According to this source, the poem is based on the poet’s direct experience of a ceremony held following the death of his sister-in-law. This ceremony — called kotsu-age, “bone raising” — is a Japanese custom that follows the cremation of a dead body. The family of the deceased use special long hashi (chopsticks) to pick up cremated bones and transfer them to an urn.

2. The phrase nare no hate refers to a ruined state that is finally reached after some sort of downfall.

3. This poem contains no season word. The Japanese technical term for such haiku is muki (無季), “seasonless.”