This week, New to Haiku presents a portion of beginner’s handout on haiku compiled by Terri L. French, board member of The Haiku Foundation and the co-editor of contemporary haibun online. Thanks for sharing your thoughts with us, Terri!

This summary contains some material sourced from Haiku: A Poet’s Guide by Lee Gurga with Charles Trumbull. This book is recommended reading for new haiku poets.

The “aha” or “haiku moment” refers to finding the hidden or unexpected significance in the things around us — the “epiphany.” Haiku moments can occur anywhere at any time — and usually unexpectedly.

Sometimes the “aha” of the moment only comes with the recollection of the experience.

We use haiku elements and craft to convey the haiku moment and share it with our readers.

Basically a haiku in English must possess the following:

The haiku craft is where you put the elements listed above into practice. Now we will go into more detail on the elements and what it actually takes to write a haiku you can be proud of and maybe even get published!

one fly everywhere the heat

Lightness is known in Japanese as “karumi.” This refers to the simplicity and clarity of the haiku. Here are some pointers to help you write simple, clear and precise haiku:

–Use capitalization and punctuation sparingly. (It’s only used rarely, for effect.)

–Use common but not boring language.

–Be specific and particular.

–Use nouns that are literal images. In other words, use concrete nouns to create your image, don’t be figurative. Don’t try to be “poetic.” Avoid simile and metaphor. Focus on things as they are.

–Be wary of “gerunds” which are nouns ending in “ing.” In other words, avoid nouns derived from verbs. Use vivid active verbs but be careful of “dangling participles.” For example:

while reading Dickens
the airplane lands
in London

Is the airplane really reading Dickens!?

–Avoid judgement, intellectualization and explanation. Let the moment speak for itself.

–Avoid rhyme. Rhyme, especially end rhyme distracts from the haiku and is generally frowned upon, but literary devices such as consonance, assonance, and onomatopoeia, are used widely by haiku poets.

There have been some proponents who have tried to broaden or reform haiku by not insisting upon a kigo, but most Japanese and western haiku written today still follow tradition by including a kigo.

The association of a kigo with a particular season may be obvious or more subtle and sometimes even obscure. A kigo, of course, can change dependent upon where one lives geographically and according to the cultural adherence. A seasonal word or phrase does not have to be a reference to nature. For example:

after Christmas
a flock of sparrows
in the unsold trees

What season does this haiku invoke?

Can you think of some other obvious and less-obvious kigo?

“Kireji” or the “cutting word” refers to a specific Japanese poetic technique of using a word or sound to cleave the haiku in two. In English-language haiku, we often use punctuation instead, such as the em-dash(—), colon(:) or ellipsis(. . .), to give the same effect. This is one of the few times when punctuation is used in haiku. Other times, there is a natural pause in the reading of a haiku:

echo in the pines
the hoot owl tires
of answering me

We talked above of the kire or pause in haiku. Juxtaposing or comparing two images within the haiku helps to divide it into two parts. For example:

Comparison of the two images:

the swell of her breast
against the watered silk—
summer moon

Contrast of the two images:

mounted butterflies
snowflakes
through the window

Visual images are most common in haiku, but sounds, smell and tactile imagery should also be used. For example:

Interpretation can differ from what the poet intended. Obscurity and ambiguity – if not taken to the extreme – can be used very effectively in haiku. For example:

a small girl. . .
the shadows stroke
and stroke her

Stilted language refers to haiku with missing articles (“the”, “a”, or “an”). While there definitely don’t have to be complete sentences in haiku, you also don’t want to cut out words that are needed to make the sentence flow.

Also, don’t make your haiku into a “grocery list” of images. For example:

The haiku moment is much more likely to lodge in the reader’s mind if the images are presented in the same order that they were experienced. For example:

Which haiku do you prefer?

When trying to determine how best to divide a poem, it is important to consider what should go at the beginning and end of each line.

Consider these two haiku that I wrote. Which is better?

wind blowing
on the child blowing on
the pinwheel

Some say haiku must be experienced “in the moment.” If not, these poems are often referred to as “desk haiku.” Does a haiku have to be directly experienced to be authentic and effectual? For instance, many poets who did not directly experience the Japan earthquake and tsunami wrote haiku about it. Do you think this is okay? What about haiku written from memories or even the imagination — are they authentic?

As with any art form, you need to learn the rules before you can break them. You will find that many successful, published haiku poets bend and even break the rules at times.

For beginners, it is better to concentrate on the content/imagery than the form. You can always play with the form in the editing process. The most important thing in learning to write haiku is to become AWARE of your surroundings in order to find the imagery you will use in your poems.

Remember, to WRITE good haiku you must READ good haiku. Subscribe to or visit online journals, read anthologies, visit the Haiku Society of America or The Haiku Foundation websites. Always have pencil and paper – or your phone – at your disposal. You never know when or where you will find your haiku moment. 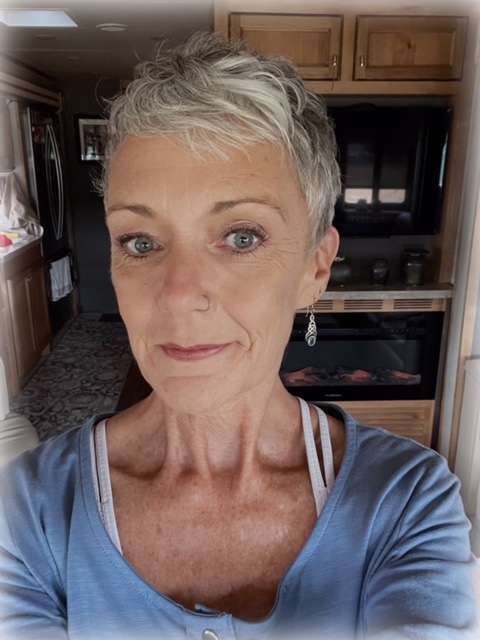 Terri L. French currently serves on The Haiku Foundation Board of Directors. She is also on the editorial team of the online journal, contemporary haibun online. Terri is past southeast regional coordinator of The Haiku Society of America and former editor of Prune Juice Journal of Senryu & Related Forms.
Now retired, Terri, her husband Ray, and dog Chaka, enjoy the nomadic lifestyle of full-time RVers.
https://www.terrilfrenchhaiku.com