Do you think in “Lives of the Poets” by Michael Schmidt, William Blake’s ideas on simile are similar to what many haiku artists think of simile? 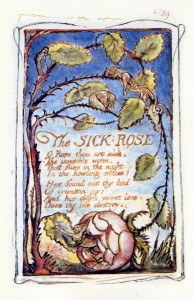 “He distrusts similes because they single out qualities—moral or otherwise—from a subject and the thing to which it is compared. Simile disembodies and is at variance with his vision. ‘The Sunflower’ and ‘The Rose’ are not referred back to human experience: they include it…