A Penny For Your Thoughts  by Scott Metz 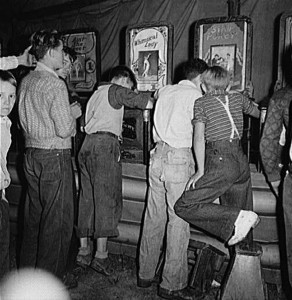 Unquestionably the most influential car of the 20th century, if not its most influential invention, the Ford Model T began both America’s car revolution, and, in effect, so many of the crises our nation and the world are now experiencing.

Through this image, this object — this symbol — and the road its on, it requires us to re-imagine and feel the growth and rise of the American empire, “free market” and global capitalism, industrialism, dependency on foreign oil, urban sprawl/suburbia, pollution, global warming, and the destruction and molding of the American landscape into a webbing of asphalt. Its impact is far and deep, and will be felt for centuries to come. It seems that this dark/black image can, through the lens of capitalism in the name of growth and expansion/Manifest Destiny and convenience, even take us back to the removal and destruction of the indigenous inhabitants of North America/Turtle Island. It’s arguable that the Ford Model-T is just as destructive, if not more so, than the invention of the nuclear bomb. Only time will tell. Or hasn’t it already?

And yet, this poem does not seem to be overtly alluding to a Man v. Nature moment. Society, the nation, the world, is rounding the curve, traversing it, and almost seems at one with it here. Society instead is moving forward, onward and upward, avoiding the steep cliff just over the edge, puttering along into the bright/white future. Clearly, however, what has transpired since 1908, much less 1961, can not be viewed nearly as serenely. The future is here. Man, instead, through the car revolution, has become very much at odds with the world he’s in. And so we have the entirety of 20th century American history, and its current crises, in the wing span of that heron, rounding its white curve, unfolded and spread out before us.

And yet there are other things going on in this poem, displaying innovation in haiku that is rarely, if ever, played with these days, or any other era of English haiku for that matter.

The poem can be considered both surreal and avant-garde.

It is surreal in the sense that it presents to the reader a fantastic, impossible-possibility, the “impossibly true.” Though the first two lines lull the reader into a state of ordinariness — perhaps driving along a snowy road, a winter scene, the curve perhaps implying a bit of treacherousness — the last line shatters that reality, shocking the system, and thus elevating it to something psychedelic. If a car were indeed small enough, it very well could ride along the wing of a bird (think Honey I Shrunk the Kids [1989] or the scene in Star Wars Episode V: The Empire Strikes Back [1980] where the Millennium Falcon is at rest inside the cave of an asteroid, only to find it’s been resting on the body of an asteroid-worm). But it is not; and so we are shot inside a microcosm, and a world of fantasy. And yet it is steeped in reality and naturalness. It plays with images that are common: a car, a bird. Yet they are seamlessly put together, thus creating something wholly unique and extremely refreshing. The images are immediate and vivid, beautifully simple, and effortless to imagine. It is a poem of the imagination, yet the juxtaposition does not hurt or strain, but instead delights, surprises and pleases.

It is avant-garde in the sense that this use of surrealism and rupture from “reality,” the common infused with the fantastic, indulging in the imagination, is a sharp break away from the predominant shasei method of sketching what is literally before the poet (or interpreting the images in a strict and literal way), so overwhelmingly used in English haiku. It clearly abandons this method.

The poem’s use of stark black and white imagery also reminds me of films, especially that of the silent era (this is, after all, a silent poem, except perhaps for the chugging of the vehicle, though it’s not mentioned). The surrealism reminds me of animation and cartoons and their unique ability to present the ridiculous and impossible as real and possible with style, humor, beauty and grace (the dancing hippos and crocodiles segment in Fantasia [1940] tiptoes to mind). I see this poem as something akin to a film clip one might view in a penny arcade (though I am a product of the 1980s, I was able to experience the uniqueness of penny arcades along the boardwalk while looking for the Ms Pacman machines). And so the poem becomes a kind of short, looped silent film/cartoon.

Insert coin and look through the viewfinder:

And on and on. Those last three words surprise every time, throwing the reader/viewer into a dream-like world. The wildness of nature, and the wildness of the imagination.

In 2009, Ford posted the largest financial loss in its history. Though they didn’t apply for government bailout money (yet) — unlike the other Detroit car corporations — it seems it is surely in its death throes if it does not evolve and gain new vision.

The herons, as far as I know, are still doing fine. And even if they are not, I highly doubt they will decide to go to war, invade other countries and murder their civilians in order to preserve and defend a selfish, greedy and wasteful way of life.

Now, how about another coin?

As featured poet, Cor van den Heuvel will select a poem and provide commentary for Viral 3.2.