Out of the Ordinary  by Jim Kacian 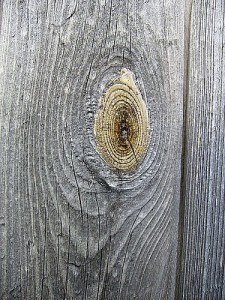 from house
to barn
the milky way

What could be more mundane than the daily chores? How many times has the poet walked between house and barn to feed the animals, return the tools, make his way home? And every night the sky has been there. But this night, the poet was open, was reawakened to the splendor of such a vision in the midst of the humdrum of everyday existence, and was rewarded. Note the order of things: from house — where we live, what could be more ordinary? — to barn — where we work, or where we find the tools for our work — to the Milky Way — overarching, encompassing all, simply there.

The poem achieves its effect through surprise. The reader, after the first line, after the second line, believes he is rooted in the mundane. It is easy to conceive that what we are to imagine is not something visual, but rather some task of the mundane, walking, perhaps, between these two reference points. Then, quite unexpectedly, our vision is shifted upwards, out beyond our simple references, and to the cosmic. The delight of our surprise mirrors the poet’s own, coming upon this in the midst of his workaday world.

The poem works in other ways, too. It is, of course, extremely brief, a mere seven words, eight syllables. But compressed in these eight syllables are three strong images, three strong emotional nodes, and a compelling force which binds them together. Both the rhythm and the sound of the poem serve to enhance this force. The rhythm is direct: two short lines in monometer, one iamb each, completed by a smooth dimeter of two iambs, relatively unstressed: simple addition. But the poem is obviously more than the sum of its parts.

The verbal color works nicely to complete the effectiveness of this poem as well, moving from the complex diphthong in “house” to the dark but opening sound in “barn” to the cadence of the wholly open vowel of “way,” each moving farther forward in the mouth, ultimately a release. The connectives are liquid, their sounds transporting rather than stopping. This contributes to the speed of the poem; likewise, the short “i” of “milky” hastens us to the surprise of the discovery, upon which we linger in the long final “a.”

What accumulative power such a brief poem can muster: in its eight syllables, we are transported from the mundane into the infinite. The poet controls our journey there with surety and dispatch. Before we can realize, we are amidst the crowding stars, willing riders out of the ordinary.

As featured poet, Lee Gurga will select a poem and provide commentary for Viral 1.3.