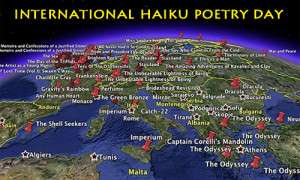 Today is our global day of celebration of all things haiku, International Haiku Poetry Day 2018. Here’s the schedule of events:

HaikuLife 2018 features HaikuLife Format (17 segments of 17 seconds each: view our demo); Video Haiga (treatments of individual poems or short series of poems); Free Format (pretty much anything goes); and Feature Format (anything longer than 10 minutes).

Join poets from around the world by contributing to the world’s largest collaborative poem. This year’s theme, taking its cue from The Audubon Society’s Year of the Bird, features a poem by Ampū. We began at midnight at the International Dateline and will run until midnight here on the East Coast of the US.

Meet with fellow poets to share the genre we all love. Then tell us about it, in words and pictures, and we’ll share the festivities here with everyone!

And of course we announce here the winners of the Touchstones for 2017:

The Touchstone Distinguished Books Award for books published in 2017

The Touchstone Award for Individual Poems for poems published in 2017

We will honor each of the winners over the course of the next several days with their own posts, and commentaries on their winning work.