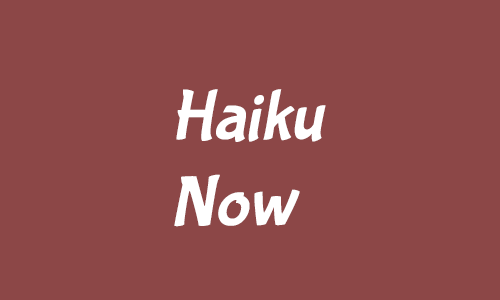 HaikuNow!, our international haiku contest, was established in January of 2010.

It had a brief but glorious run as the best series of contests in the genre. It comprised three categories — traditional, contemporary, and innovative, and ran from 2010 through 2014. It was administered initially by Laura Sherman and Tom Painting, and later by Alice Frampton. United States Poet Laureate Billy Collins served as guest judge in 2010, Jane Hirshfield in 2011 and 2012, Peter Duppenthaler in 2013, and Thomas A. Clark in 2014. All adjudicated the Traditional category. One of the features of its design was to employ the previous year’s winners as screeners for the next year’s contest, involving these poets as part of the process of the contest and guaranteeing no repeat winners. The contest was free to enter and attracted thousands of submissions each year. Cash prizes and certificates signed by the judges were awarded to three winners and a varying number of honorable mentions. A children’s division was planned for 2014 but never implemented. The HaikuNow! contests were abandoned not for lack of success but for too much of it — they were expensive to run in terms of manpower and time, something we had too little of in those early days.