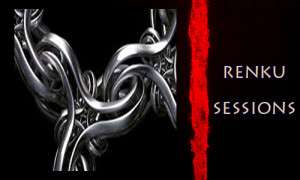 The Renku Sessions has proved to be one of our most popular features. Linda Papanicolaou, sabaki for Renku Session 3, here summarizes “A Bowl of Cherries,” our recently completed triparshva (22 verses), which takes its place in our archives with “Pilgrims’ Stride” (36 verses, led by John Stevenson), and “Distant Melody” (12 verses, led by Sandra Simpson).

“The leaders and the led: In contemporary Japanese renku circles it is customary, on the completion of a poem, for the poem leader, the sabaki, to post a tomegaki. This word has the same root as that for a ‘clasp’ and is a kind of debrief that draws some important strands of the compositional discourse together. The participants will also post a kanso. This might be given as ‘an appreciation’, though in practice it is not de rigeur to be unfailingly flattering. Nonetheless, tomegaki, kanso, these words are redolent of status relationships: I lead; and you are thankful.” (John E. Carley, “Yellow Moon: Tomegaki”, Simply Haiku Winter 2009.

John Carley always had a pithy way of putting things, didn’t he? If you’ve been participating in or following the progress of our triparshva, you’ll have noticed that I’ve often given resource links to his writings — notably Renku Reckoner — as well as to essays on Bill Higginson and Tadashi Kondo’s Renku Home website. Having accepted to lead a triparshva here at The Haiku Foundation, I also spent time in the archives, familiarizing myself with the poems led by John Stevenson and Sandra Simpson, thinking how best to build on their foundations for renku writing here at the Foundation. At 22 verses triparshva moves more quickly than kasen, while preserving kasen’s jo-ha-kyu development articulated across sides. A browser search will bring you any number of triparshva by accomplished renku writers, but since I’m a teacher by trade, I decided to conduct this triparshva so as to take advantage of its educational strengths. Again, Carley may have said it best when he and Norman Darlington introduced the form on Simply Haiku in 2005:

“The Triparshva by contrast offers both jo and kyu enough time to develop their special tonal characteristics. The intensification movement is only two verses shorter than a single ha face of the Kasen. It therefore allows for a more concerted exploration of both content and dynamics. Indeed it may not be an exaggeration to say that a poet who masters the Triparshva has been well prepared to better understand and exploit the classical characteristics of the Kasen.”

As is often said, online renku presents a very different experience from the traditional renku party. Participation may be international, ranging across different cultures, time zones, even seasons and climate zones, not to mention that online renku typically take much longer — especially the open participation and the one-week turn-around time for verses here at The Haiku Foundation. Still, challenges can also be opportunities. All the candidate verses and discussion are recorded on the comments threads. I began to see the importance of this while we were in progress: with so many participants, some dropping in and out, it made for a lively sharing of ideas. I often felt in selecting which verse to place that if I listened to the renku, it would tell me what it wanted for the link.

So who was leading and who was being led? In his introduction to the published edition of Renku Reckoner, Chris Drake speaks of something called a “renku wave”:

“. . . a long passage of verse that builds and breaks thanks to an extended chain of non-cognitive association . . . non-contiguous verses that flash or vibrate here and there in a renku, in a strong way that links the verses despite their formal distance from each other . . . intuiting and articulating oblique relationships that are not immediately perceptible yet are emotionally, esthetically, and spiritually significant . . . as long rhythms that have somehow appeared in the perceptible world . . .” (Chris Drake, introduction to Renku Reckoner, Darlington-Richards 2013, pp. 12-13).

This is, I believe, what makes a renku remain pleasurably readable, to participants when the excitement is over and to readers who were not participants as well. I think we’ve achieved it with “A Bowl of Cherries”. Many thanks to everyone who was involved, whether submitting verses, cheering from the sidelines, or supporting behind the scenes as I learned the ropes with WordPress. It’s been a privilege to be a part of the vibrant renku community that’s developing here at The Haiku Foundation.

Our many thanks to Linda for her expert guidance, and we look forward to working with her again. Our next Renku Session will begin in March 2016 under the leadership of Marshall Hryciuk. We will make announcements as that time approaches.

Please consider making a donation to The Haiku Foundation during our Fundraising Drive, November 26 – December 6, and help the Foundation continue its important work. And visit our Gift Shop to get cool haiku gifts in return for making your donation. Thank you.