Welcome to re:Virals, The Haiku Foundation’s weekly poem commentary feature on some of the finest haiku ever written in English. This week’s poem was

We had many responses to this week’s poem, suggesting either that readers found resonance with it, or that it challenged them. Marion Clarke was of the latter school of thought:

This poem struck me as quite an angry piece, perhaps because of those randomly placed uppercase letters and the use of an ampersand, as though the author couldn’t be bothered writing out the word in full — like a literary act of defiance.

I think the author is making a comment about colonization, that as soon as we arrive in an unspoilt land, it signals the beginning of the end for that place. We don’t have many elements to work with here, but “& the” is suggesting that the disappearance of the place is a consequence of the arrival of someone or something. An interesting poem.

When I read this excellent poem I thought of Basho’s haiku:

Even in Kyoto —
hearing the cuckoo’s cry —
I long for Kyoto.

I first read Basho’s poem some time ago, in The Essential Haiku: Versions of Basho, Buson, & Issa (1994, Ecco Press). So I located the book on a shelf, and found that I wrote “Ecclesiastes 3: 11” next to Basho’s haiku. Here is that verse, in the King James Version:

“He hath made every thing beautiful in his time: also he hath set the world in their heart, so that no man can find out the work that God maketh from the beginning to the end.”

Actually, though, Baraka’s poem is part of a haiga, to which Betty Shropshire chose to respond creatively, resulting in a wholly new ekphrastic product: 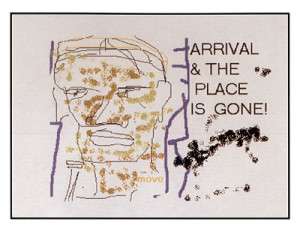 The week’s winning response, however, comes from Garry Eaton, who writes:

Pilgrimage to an old shrine that has vanished? Disappointment over the shifting goals and wasteful fashions of our treadmill lives? Though the poem uses a metaphor hardwired into our imaginations, travel and the open road as spiritual questing, it does so in a way that undercuts the metaphor as a universal. Tantalizingly, the goal being reached in the poem is not described as anything but “Arrival,” a deliberate vagueness that could, but doesn’t, necessarily, suggest airport arrivals lounges, with all their aura of suspended, dehumanized anonymity. Read thus, the poem seems to be talking about the loss of paradisical wilderness and its opportunities for redemption (“the Place”) under the pressures of progress and increasing populations bent on human and economic development. Its effectiveness as haiku lies in the number of legitimate questions raised by the experience of reading it, rather than in any it answers.

As this week’s winner, Garry gets to choose next week’s poem, which you’ll find below. We invite you to write a commentary to it. It may be as long or short, academic or spontaneous, serious or silly, public or personal as you like. We will select out-takes from the best of these. And the very best will be reproduced in its entirety and take its place as part of the THF Archives. Best of all, the winning commentator gets to choose the next poem for commentary.

Anyone can participate. A new poem will appear each Friday morning. Simply put your commentary in the Contact box by the following Tuesday midnight (Eastern US Time Zone). Please use the subject header “re:Virals” so we know what we’re looking at. We look forward to seeing some of your favorite poems — and finding out why!