Today’s column is a guest post about how to read one-line haiku from Kat Lehmann and Robin Anna Smith, co-editors of whiptail: journal of the single-line poem. This post is the first in a planned series of articles, which will be tagged as whiptail monoku series so you can read them all together. My thanks to Kat and Robin for sharing their expertise with New to Haiku!

When we start to explore English Language Haiku (ELH), we notice there is a wide variety that ELH can encompass. This variety may relate to the subject of the poem, from the classic (cherry blossoms, the moon) to personal topics (loneliness, rejuvenation), to imaginative topics (science fiction haiku, also called scifaiku). No topic is off-limits with haiku.

The structure of haiku can vary as well, depending on what format best suits the poem. This can be anything from formatting in the typical three lines, to one line, to haiku written as a single vertical column (as haiku is often written in Japanese), to haiku written in a circle (called cirku), or other concrete shape. The consideration here is whether the format of the poem enhances its meaning and is thus the best structure (or structures) for that particular haiku.

In a series of short articles, we’re going to explore some of the features that are seen in one-line haiku, also called monoku (a term coined by Jim Kacian), and what makes the one-line haiku structure special. The emphasis will be on honing our skills to read one-line haiku, as becoming a better reader of haiku helps us in our writing explorations.

Our first entry focuses on reading poems that contain multiple breaks. How can a poem on a single line have breaks? As we hope to demonstrate, this can happen more easily when the poem is presented on a single line than a poem that has defined pauses such as line breaks and dashes because it is up to the reader to find the pauses, breaks, and multiple readings (and delightful misreadings) of the haiku. Depending on how the poem is written, a one-line haiku (or one-line tanka) may contain multiple, overlapping readings that enhance the experience of the poem.

Words have their own cadence and natural pauses, which can be heavy hesitations or mere hiccups. We can appreciate this more easily when we read aloud. Physical breaks are not necessary unless we want to enforce specific readings of our poem.

i hope i’m right where the river ice ends

In the first straight-through read, it sounds like the author is saying they hope they are physically where the river ice ends. Julie Bloss Kelsey says, “To me, the first read is one of excitement, taking you right to the edge of the river ice, almost like an eager child running right up to the edge without fear.” The kigo “ice” sets the poem in winter, probably at the transition between winter and spring because the river ice is ending (melting).

The words can be cut to create additional ideas:

i hope i’m right
where the river ice ends

Julie continues, “The second read—to me—is still literal. But it is more hesitant, more fear of falling through the ice, so the break is part of the halting nature of the steps.”

Another way of reading this “enjambed” (line break) version emphasizes “I hope I’m right,” as if the poem were written during a disagreement or a debate. The phrase “where the river ice ends” feels more metaphorical now, as if the ice melting is a calming of emotions surrounding who is “right.”

This third, more nuanced reading does not negate the initial, more literal readings. They enhance each other. I hope I am correct. I hope there is peace. And I want to physically be where these things are true. The poem contains multiple poems, each of which stands alone and speaks to the other like a conversation. This joint reading, sometimes fanciful, is something that one-line haiku does particularly well. What other readings can you find within this poem by positioning the “cut” at different places?

Here’s another example by Elisa Theriana (whiptail: journal of the single-line poem, Issue 3, 2022):

in the name of healing fireflies in the jar

The phrase “in the name of” means to evoke the authority of someone or something to justify the reason or motivation for an action. Here, the straight read of the poem indicates we are using “healing fireflies in a jar” as justification “in the name of” something. But who is healing fireflies in a jar? The poem is a bit nonsensical when taken literally this way, because fireflies are likely happier when freed than kept captive. The initial surprise at the phrasing encourages us to look deeper for additional reads that expand the meaning.

in the name of healing
fireflies in the jar

Ah, in this reading we are saying “in the name of healing” we are going to help the fireflies, perhaps releasing them from the jar or basking in their light. Healing is the reason and the motivation.

in the name of healing
fireflies
in the jar

If we break the haiku apart further, “fireflies / in the jar” becomes a kind of metaphor for healing. Our inner healing journey is like fireflies—our inner light—in the jar.

in the name of
healing fireflies
in the jar

This fourth reading suggests that we are the ones in a jar and the “healing fireflies” are healing us.

There are lots of nuances possible in these overlapping meanings, aren’t there? Which meaning is intended? Is it one or all of the meanings, and are there also other meanings not mentioned yet? We must assume that the poet intends all of the readings to be considered as part of the rich meaning of the poem. Let’s summarize each of the four readings above:

1) We have fireflies in a jar as a kind of motivation for something.

2) We want to help the fireflies.

3) The fireflies might be OUR fireflies in our metaphorical jar–our own healing.

4) Our healing can come from internal or external sources.

When we read these together as a meditation, the feeling grows that by working to heal and help others, we continue to heal ourselves. That there are “fireflies” within me and “fireflies” within you that we can heal. The emotion it evokes might feel a bit abstract, but it’s solidly based on the physical experience of seeing fireflies in a jar. Fireflies is a summer kigo, which adds to this feeling of health and vitality. This is one of the powers of poetry—to express ideas with words that cannot simply be put into words.

Here’s one more example, this time from Richa Sharma (whiptail: journal of the single-line poem, Issue 1, 2021):

for a short while renting my heartbeats

There are two main breaks that surface here:

for a short while
renting my heartbeats

Who rents their heartbeats? This haiku might have an existential theme or there could be something more to this. Let’s continue.

for a short while renting
my heartbeats

For a short while, the protagonist in the poem is renting something, perhaps an apartment. The words “my heartbeats” could indicate nervousness or a sense of aging. How many heartbeats fit in “a short while,” until they are no longer renting? This returns us to the first reading and an awareness of mortality.

Suddenly, “renting my heartbeats” doesn’t sound so odd. Sometimes a life event like a change of living situation brings emotions that cannot be explained in a conventional way. Thanks to poetry, we can communicate a deeper meaning while grounding ourselves in the physical occurrence of moving.

Ultimately, all of us are “renting our heartbeats,” and on the cosmic scale of things, all of us rent them “for a short while.”

A benefit of writing certain haiku on one line is that multiple readings can arise. These multiple readings and meanings can combine to express more than one idea. Although some of these readings may seem impossible or even extraneous or unwanted, as a careful reader of one-line haiku we must assume the author intended them to be there and that they are serving a purpose. This purpose could be adding a layer of meaning, connecting the poem to the otherworldly, or just pushing the reader a little off-balance to arrive at a deeper meaning. 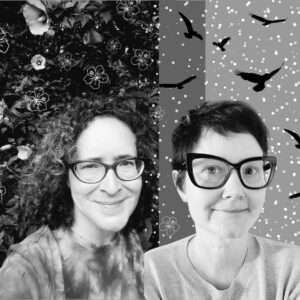 Kat Lehmann and Robin Anna Smith are the Founding Editors of whiptail: journal of the single line poem and Associate Editors at Sonic Boom. They are both Touchstone award-winning poets who currently volunteer at The Haiku Foundation’s Touchstone Awards as Panelist for Distinguished Books (Kat) and Coordinator for Individual Poems (Robin).