Quicksilver: the chronicles of a newcomer to the art of haiku 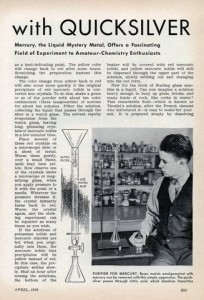 One of the first things I learned about haiku is that each poem must contain a seasonal word. Sounded easy enough. I assumed that this was open to interpretation and that I could pick words that evoked different seasons for me.

As I studied further, I ran across the term “kigo.” Kigo is a Japanese seasonal word. These are set in stone. Students of haiku in Japan study a kigo dictionary, called a “saijiki,” to learn which words represent which seasons.

As I continued to explore this area I saw that some haiku poets branched from the kigo concept and sought seasonal words appropriate for their area. In a different discussion on Young Leaf #2 (here on troutswirl), I was intrigued by how seasonal words could vary depending on where you live in this world.

Lorin Ford pointed out that July is winter in Australia. I couldn’t believe that I hadn’t considered that before. Since I live in Florida, I never thought of it as anything but a summer word (a very hot, humid, sticky seasonal word).

I see there is a debate between the traditional kigo approach and the seasonal word concept (which is a bit more open to interpretation). I plan to study both approaches more and learn from each.

I do have trouble sometimes finding an appropriate kigo or seasonal word for my haiku. I know it isn’t a haiku without one.

I have been working on two haiku that have stumped me. For me “sandy” speaks of summer, but I know it isn’t a kigo. Does it work as a seasonal word?

Then the other has been with me for a while. I love going to the beach and watching the sun touch the horizon. It’s a special moment for me. It is also a little sad when the moment is gone and the sun has set.

So, for me both haiku speak of summer, but I suspect neither has a seasonal word. How does one “insert” a seasonal word without losing the poetry? I could make Line 1 of the second haiku: “red summer sun touches.” Or perhaps, “august sun touches,” which might infer that summer vacation is over as well. I prefer the original, but suspect it isn’t a haiku.

Can you help me sort this out?

What do you do when you write a haiku, which doesn’t contain a seasonal word?

Quicksilver Hg2: One Step at a Time: Learning About Haiku