Don Wentworth is the founder, editor and publisher of the Lilliput Review, a zine devoted to short poetry, including haiku, and has published haiku chapbooks by Gary Hotham, translations of Kobayshi Issa (by Dennis Maloney), as well as Japanese nature and love poems. His appreciation for Japanese and Asian poetics is strong. Don also runs a blog, Issa’s Untidy Hut, where David G. Lanoue’s Issa translations are often featured, and has consistently featured haiku and senryu in many different ways. He recently began the Bashō Haiku Challenge contest, and has devoted recent blogposts to the latest issue of the Haiku Canada Review, one of ed markowski’s haibun, “Union Men” and gave a nod to the work on Richard Gilbert’s Gendai Haiku website. He also runs a twitter page for Lilliput here.

Recently, Don devoted a post to one of ed markowski’s baseball haiku, from his pinch book Pop-Up. I found his commentary to be insightful and rewarding and thought it would be great to share with troutswirl readers.

Like Don, I am not much of a fan for baseball haiku (or baseball poetry in general), though a few have stuck with me. One I am particularly fond of is this one:

Having eaten whale meat,
orphans and a doctor
play baseball.

For me, this is a poem of pain and sadness, where the whale meat and the baseball game are not a delicacy or a nostalgic past time but things of absolute necessity, things that enable one to survive—to forget and take one’s mind off of hunger, pain and loss and perhaps the encroaching shadow of death. Perhaps it is a bit heavy, but it feels real, deeply felt, a bit odd or strange, if not ominous, with numerous layers of depth. It is a reminder that we need games, we need to play, especially during times of great anxiety, because they give us a sense of freedom from the seriousness surrounding us. This reminds me of a quote about haiku’s rich history by Haruo Shirane from his essay “Beyond the Haiku Moment: Basho, Buson and Modern Haiku Myths”:

“One of the reasons that linked verse [renga/haikai] became so popular in the late medieval period, in the 15th and 16th centuries, when it first blossomed as a genre, was because it was a form of escape from the terrible wars that ravaged the country at the time. For samurai in the era of constant war, linked verse was like the tea ceremony: it allowed one to escape, if only for a brief time, from the world at large, from the bloodshed. The joy of it was that one could do that in the close company of friends and companions. When the verse sequence was over, one came back to earth, to reality.”

What do you think of Don’s commentary on ed’s haiku below? What baseball haiku are you most fond of and why?

ed markowski: The Essence of Haiku 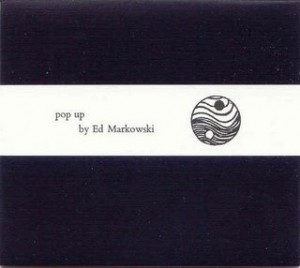 Pictured above is pop up by ed markowski, a lovely little accordion-style publication, #6 of vincent tripi‘s “Pinch Book Series” from tribe press, published in 2004. ed sent this along with a parcel of other things and I enjoyed it very much. One poem, from which the collection takes its title, in particular grabbed me:

summer loneliness. . .
dropping the pop up
I toss to myself

This little 10 word piece got me thinking about a variety of things. First, I might have to retract my avowal of hating baseball poetry; I find that I’ve talked about this at heated length in three different past posts and, on reading ed’s poem, it occurred to me that there is going to come a point when saying “Baseball poems are awful but you’ve got to read this one . . . ” is just not going to cut it anymore. It seems, perhaps, I protest too much.

Could it be that I just hate bad baseball poetry?

In thinking it through, one of the problems I have with baseball poems is the fact that the game is generally taken for a metaphor for life itself. It seems to me that when folks start futzing with metaphors of a metaphor, it isn’t post-modernism: it’s just plain ugly.

And yet and yet …

I’m stuck with these baseball poems I really like. ed’s poem resonates so well it positively hurts. Baseball is a team sport and here we all are, social animals. We have to cooperate to get by, to say nothing of excel. Catching pop-ups is one of the big thrills of baseball for the young and ed’s protagonist here is alone and is forced to play by her/himself. S/he’s throwing the ball in the air, perhaps pretending to be catching a long fly, and drops the ball. And this cuts in so many ways. Is it the catcher’s lack of skill? Lack of playmates? Boredom, causing lack of attention? Of course, it is all these things, which is the beauty of the haiku form. The reader participates in the writing, the poet creating a telling resonance with enough space for all to bring their memories and observations and feelings.

Summer loneliness: there is none deeper when you are young, summer being the time you just longed and longed for and when it came and it inevitably disappointed, that disappointment was deep, indeed.

Still, it’s all just a damn baseball poem, right? But somehow this poem was digging deeper, it was getting under my skin in some very personal, inexplicable way. The poem stuck with me. It just wasn’t assimilated, analyzed, admired and filed away pleasantly: it seemed to be bubbling just on the surface of my consciousness, sometimes in thought and, perhaps, sometimes just below.
Then, a few nights ago, I woke up around 3 am, thinking these thoughts about this poem and it hit me: it was a particular summer, 1959 or 60, I think:

My best friend, who lived across the street from me, and I lived and breathed baseball. We played night and day and when we weren’t playing we were talking or watching or listening to baseball. We used to go down to the local field, just the two of us, and hit pop-flys to one another, about all you could do when there was only two to play. Being 8 or 9 years old, we couldn’t hit fly balls like adults and the result was we chased a lot of grounders or hit a lot of balls that fell short or went over the fielder’s head and a lot of downtime was spent chasing the ball, waiting around for the next fly and chasing the ball.

So, it was always a thrill when an adult deigned to take us to the park and hit out to us. One Saturday, his dad, whom I remember as having played some minor league ball, said he’d take us to the park, about a half mile away, and hit out to us. We were ecstatic. He did some little league coaching and even had a fungo bat, a special kind of light weight bat designed for repeated hitting and perfect for fly balls. We were set.

We walked down to the park and had a glorious hour and half to two hours and could not have been happier. His dad positively wore us out, not an easy task when it comes to a couple of 8 year olds. We started walking home.

We were about 6 or 7 houses away when I saw it: a sign in a wire holder, orange letters on a black background, FOR SALE. And it was up in front of my house.

What this did to an 8 year old boy, walking up the street with his best friend, after a dream-come-true kind of baseball afternoon, hardly needs to be said. In affect, our friendship ended right there, at that moment, in the hot rush of shame and fear and an awful crushing sadness. It was the beginning of an all-encompassing summer loneliness that I can feel fifty years later like it happened yesterday.

It was dropping the pop-up I tossed to myself.

Poetry is like that. If we let it in it can change our lives, it can make them richer in ways we can’t even imagine. It doesn’t matter if you’re into haiku or epics or language poems or romantic poetry or whatever. I tell the lifelong learners in the classes on introductory poetry I occasionally teach that, for me, poetry is a way that I establish a dialogue with myself. The poet shares feelings, insights, adventures, ideas, images and we read them and compare what we have felt and thought and seen. We think about these things in different ways, from different angles, little dispatches from the poets themselves to us, little koans to help out in our everyday lives, ways to unravel knots maybe we didn’t know we had, songs about how truly lucky we are or how we need to make ourselves and our worlds better places to be, ways to lift up and support our loved ones and friends.

Thanks, ed, this one means a lot; ten succinct, insightful words, touching in ways you might never have imagined.