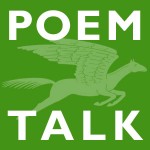 For those interested in listening to poems read by their composers, as well as an analytical panel discussion on the poem, Poem Talk, hosted by Al Filreis, is an extremely engaging and educational blog to visit. There is already a wealthy archive of podcasts. Of particular interest to readers might be Part #1, William Carlos Williams’ “Between Walls” which touches strongly upon haiku aesthetics, as well as Wallace Stevens’ “Not Ideas about the Thing but the Thing Itself,” Part #14. A number of other poets who have taken forays into haiku, or have been influenced by it, are also featured: Allen Ginsberg, John Ashbery, Ezra Pound. An episode devoted to a poem by Cid Corman is scheduled for Part #22.

Al Filreis, Poem Talk’s host, also has an interesting personal blog of his own here.

What do readers think of the idea of panel discussion podcasts devoted to individual haiku poems?