Periplum is a section that is devoted to 20th and 21st century haiku from around the world. Periplum is overseen by David G. Lanoue. For an introduction to this section, see Periplum.

Ami Tanaka was born in Tokyo on October 8, 1970. I learned this fact from the introduction to a selection of one hundred of her haiku that are included in an anthology of contemporary Japanese haiku, titled Shinsen 21, which came out in 2009. Normally, I would regard such information as unimportant. I had enough formalist indoctrination in my undergraduate English classes to scorn biography; I was taught to look for the meaning of a poem in the poem itself and not in the trivia of the poet’s life. Yet in this case, as I will explain later, the date of Tanaka’s birth is not trivial, for it supplies a vital clue to one of her haiku—a mysterious and compelling one. Tanaka introduces this haiku with a prescript in English that reads, “Atom Heart Mother, Pink Floyd (1970).” 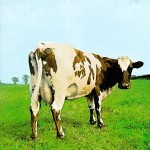 Here it is in the original Japanese, followed by my English translation.

Tanaka’s headnote sheds at least a little light on the otherwise impenetrable expression, “Atom Heart Mother.” Her haiku, the note tells us, nods to Pink Floyd’s fourth studio album. Its title derived from the headline of a news story that appeared in The Evening Standard on July 16, 1970. The headline read, “ATOM HEART MOTHER NAMED,” referring to a woman who had received a nuclear-powered pacemaker. Band member Ron Geesen saw the article and suggested that they name the album’s title track, 23 minutes and 44 seconds of instrumental rock, Atom Heart Mother. The track took up all of side one of an album that was originally sold in a cover that showed a picture of a cow in a field, with no text. Storm Thorgeson, the designer of the cow cover, said this about the title song and his cover: “When I asked them what it was about, they said they didn’t know themselves. It’s a conglomeration of pieces that weren’t related, or didn’t seem to be at the time. The picture isn’t related either; in fact, it was an attempt to do a picture that was unrelated, consciously unrelated” (Guitar World, Feb. 1998; quoted in “Atom Heart Mother,” Wikipedia). One of the song’s writers, band member Roger Waters, said in a 1985 radio interview, “Atom Heart Mother is a good case, I think, for being thrown into the dustbin and never listened to by anyone ever again! . . . It was pretty kind of pompous, it wasn’t really about anything” (“Atom Heart Mother,” Wikipedia).

So now we understand who “Atom Heart Mother” is—or, at least, we are beginning to understand. Why this mother from a song that “wasn’t really about anything” shows up in Tanaka’s haiku, in a Japanese bathroom—a so-call unitto basu—is far from clear. A unitto basu or “unit bath” is a prefabricated bathroom module that includes ceiling, floor and tub made of the same continuous material. Found in hotels and apartments throughout Japan, unit baths have the advantage of being completely water-tight. They can be easily cleaned by showering the whole room. This is the type of bathroom that our Atom Heart Mother finds herself in, in Tanaka’s poem.

There is a semi-secret, semi-private symbolism at work in this haiku—not impossible to penetrate but, to do so, the reader must do some digging. Here’s where her birthdate becomes a clue. Ami Tanaka came into the world on the same day that Pink Floyd released their Atom Heart Mother album, on October 8, 1970.

The poet and the album were “born” together. The image of “Mother” in the haiku can thus suggest, on one level, Tanaka’s own mother. The blood flowing into the prefabricated bathroom can suggest the act of birth. The “unit bath” can suggest modern Japan. And the “Atom” of “Heart Mother” can imply the atomic age from the time of Hiroshima and Nagasaki up to the present moment. Blood pouring into the antiseptic, leak-proof bath unit can suggest the poet’s life force. The fact that she came into this world on the same day that a disconnected musical suite was released with an unconnected cow cover says volumes about the absurdity into which she and all of us who are her contemporaries on this atomic world, have been thrown.

This haiku is a swirling whirlpool of images and juxtapositions—a poet’s birth with the “birth” of an album, blood and a prefab bathroom, “Atomic” and “Heart Mother.” Sit back, close your eyes, and live with this haiku for a while. Play it in your mind like a movie. What do these connections and juxtapositions show you?
To me, they show the micro-movie of a birth, a life, an era.

A cook chops parsley into finer and finer shreds, until finally it is parsley no longer; it now becomes an “abstraction”: a pure idea of parsley. Is this Tanaka’s haiku esthetic? Is she the cook in the poem, revealing her recipe for making a haiku? Is her mind the sharp knife that minces and minces natural experience (the parsely) until it becomes pure idea? Or are we the cook, all of us human beings whose brains think by dividing: by cutting the universe into this and not this, plants and animals, men and women, boxers and briefs? We think and think, cut and cut, until that which we cut finally vanishes and, according to Tanaka, becomes abstraction. Or is the physical world an abstraction to begin with? Is the cook chopping parsely or, really, is she chopping her idea of parsley? Or, if it is indeed real parsley being cut, at what point will it reach the state of absolute abstraction? Logically, Tanaka’s method recalls one of Zeno’s paradoxes: the one that says to reach a wall I first must go halfway to the wall, then half of the remaining distance, and then half of the next remaining distance—on and on, ad infinitum. Zeno argued that I can’t possibly ever reach the wall, since it would take an infinite amount of time for me to do all that dividing, all that chopping of distance.

When does parsley get chopped so finely that it ceases to exist as a physical thing that can be divided? When does parsley become an idea? Answer: only in one place; only in our minds or, putting it another way, only in a poem that our minds are contemplating, for example, this poem.

Returning to the notion of the haiku being a recipe for haiku, I wonder if Tanaka might be claiming a new subject matter for the genre. Traditionally, the realm of haiku has been Nature, more exactly, human involvement in Nature with all its myriad cycles and seasons. Nature is the parsely. But our minds divide and divide that parsely, chop it and chop it, until, at some point, it is parsley no longer; Nature is Nature no longer. At that vanishing point of abstraction we enter a realm of pure ideas, which, just maybe, is the place where Ami Tanaka’s poetry lives.

A third example from her collection of one hundred haiku follows:

the subway too
is one of echoes . . .
bird’s autumn

This haiku appears straightforward, without the semi-private symbolism of an Atom Heart Mother or a metaphysical puzzle such as parsely being chopped to abstraction. Compared to the first two haiku that we have looked at, this one seems downright traditional, complete with a seasonal reference to Nature (“bird’s autumn”). The subway station setting, of course, is modern. A bird tweets somewhere in the subterranean world of trains and travelers, in the darkness of echoes. More than in the other two haiku, this one inspires an immediate emotional response, at least for me. I feel for this spunky city bird that has adapted to the Tokyo of steel and concrete, finding warmth and refuge in a subway station or tunnel. I also sense its aloneness in the world; Bashô would surely approve of this sabi-filled verse. More than in the other two examples, this third one presents a moment that requires no great amount of pondering to arrive at a payoff . . . but wait, there’s more!

The word kodama can mean “echoes.” The little bird exists (I imagine it chirping) amid the resounding echoes of a subway station or tunnel. However, kodama has another, older meaning: a spirit or god that inhabits a tree. The haiku might therefore be translated: “the subway too/ is one of tree spirit(s) . . . / bird’s autumn.” This hint of a Nature spirit, the ghost of a tree, plainly clashes with the poem’s underground urban setting. No trees are visible here; they have all been cut down to make room for the paved-over progress of a city. The absent god’s bird might in fact be the last bird, the last remnant of Holy Nature that once thrived all over Japan, its twittering song in the shadows sounding a dirge. 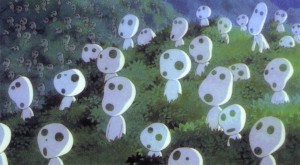 The word kodama has a special contemporary resonance. Japanese filmmaker Hayao Miyazaki used kodama in his feature-length animated film, Princess Mononoke (1997). The film puts forth an ecological theme, dramatizing a struggle between forest spirits and the forest-killing humans of Iron Town. Among the spirits fighting for the life of the forest are the kodama, which Miyazaki portrays as small white beings with big, roundish heads that rattle when they shake. It’s possible that Tanaka, in her haiku, is remembering the kodama of this popular anime, the highest-grossing film in Japan at the time, topped only by Titanic, which came out later that same year. If so, the subway scene is a deeply sad one. A bird, the last minion of a forest god, faces autumn and the extinction of winter utterly alone, engulfed by the artificial structure of Iron Town: Tokyo.

If we switch our mythology from East to West, the haiku becomes just as evocative. This bird in a subway calls to mind Orpheus in the Underworld, who charmed the god of the dead with his music on an unsuccessful mission to rescue his wife, Eurydice. Applying Orpheus as a subtext, we see the great concrete bowels of Tokyo as a Kingdom of the Dead, the only glimmer of Nature in it being a solitary bird twittering in the shadows. Its orphic song does not, however, entrance the crowds that move on and off the trains that come and go. In fact, it is barely heard, barely noticed amid the thunderous echoes of a modern Hades.

. . . in which the singing of a bird amid the mountain cedars is equated with haiku poetry. Now, nearly two centuries later, the forest is paved over and under, leaving only echoes of the beauty and life-spirit that once existed. The bird’s autumn song in its subway nook hints at Holy Nature’s demise and, concurrently, the end of haiku as Nature poetry.

To read the haiku of Ami Tanaka with deep appreciation, we definitely need to put on our thinking caps. Her work presents us with word puzzles that tease but, ultimately, please the intellect. This is a poetry of and for the head, but—as the third example shows—it can, at times, arouse emotions too, becoming just as complexly meaningful to our hearts.

I would like to thank Keiji Minato for checking my translations and giving feedback.