Periplum returns this month with the series’ third installment. This time it is a sampling of work by Masahiro Koike—work that I think will be exciting, inspiring and challenging for haiku enthusiasts in subject matter as well as expression and the way the poems play along the edges of what senryū (and haiku) are and can be.
……………………………………………………………………………………………………………………………………………………………
Like Envoys, Periplum is a section that is devoted to 20th and 21st century non-English haiku. Periplum, however, is overseen by David G. Lanoue. For an introduction to this section, see Periplum. 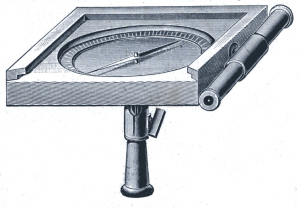 Masahiro Koike lives in Osaka and specializes in senryu and renku. With a daring imagination and sly wit to match the twinkle in his eyes, Koike writes one-breath postmodern absurdities that might or might not be–depending on how you look at them–profound. Will this poet of contemporary Japan surprise, perturb or delight readers in the West? Let’s find out.

Here’s a sampling of three of his works in Japanese and, for the first time, in English translation:

from a strap
the king of dusky thrushes
is dangled

in my sweater
the smell of the bird
I killed

This poetry wants to sink in. Don’t rush to judgment! Read and reread the above verses one by one, slowly. Savor them. Close your eyes.

For what it’s worth, here’s my own reaction, because that’s my job here: to read and report. Mind you, mine is just one way out of millions to read, receive, or—maybe the best term—interact with these senryu of Masahiro Koike. 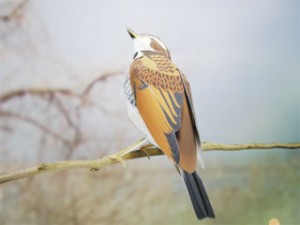 In the first example, the original Japanese leaves the identity of the “king of dusky thrushes” to the imagination. This king could be the poet himself (“I, the king of dusky thrushes, am dangled”) or someone other than the poet (“he, the king of dusky thrushes, is dangled”). The important point is that this king, whoever he is, dangles from a strap: a decidedly un-kingly posture. If he is in fact a monarch, why does he not sit on a throne or, more naturally, warble on a tree branch? This business of his dangling is disturbing, unless we choose to imagine that a photo or drawing of a bird is dangling and not the real thing. But the image of a dangling photograph or sketch lacks power and surprise. Besides, the poet doesn’t tell us that a picture is dangling from a strap; he tells us, more provocatively, that a bird is: the king of such birds, in fact. A next question for the imagination: Is it living or dead? I can picture a specimen collected by some zealous naturalist, hung up for display, stuffed. However, the image of a living bird dangling, though crueler, is possible as well. And another question, even harder or impossible to answer: How should we feel about this bird, dangling from a strap? Is his situation pitiful? Outrageous? Tragic? Funny? Koike’s image is emotionally slippery. There’s no fixed point, no moral compass hinted at in his words. This is a thing that perhaps differentiates senryu from haiku. In a haiku there are also choices for readers to make, but some of those choices resonate deeply; they feel right, feel important. But Koike’s surrealistic senryu leaves us myriad choices of equal weight or equal weightlessness. His poem is playground equipment: the seesaw goes up, goes down, goes nowhere. The king of dusky thrushes whispers no clue about what or how to think and feel about him. He, like his meaning, dangles.

According to the Haiku Society of America’s official definition, “A senryu is a poem, structurally similar to haiku, that highlights the foibles of human nature, usually in a humorous or satiric way.” Using this definition as a guide, I wonder what foibles of human nature are highlighted in this dusky thrush senryu by Masahiro Koike. At first, I start to question the definition. Perhaps senryu in Japan, begun so long ago as a vehicle for satirical attack, has grown beyond the HSA’s definition. This is actually a comforting thought for me, since I believe that great art must, at least at times, transcend its definitions, especially “official” ones. But as I think about it more, I begin to suspect that Koike with his nonsense is indeed poking fun at a human foible, namely: our desire to make sense of things—what Wallace Stevens called our “blessed rage for order.” Maybe then, just maybe, the joke is on me, on you . . . but more on this later. 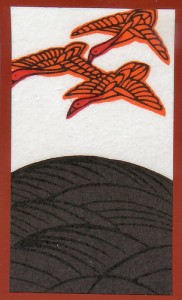 The second example refers to Japanese hana karuta or hana fuda: cards decorated with pictures of blossoms that are used in games played especially in the New Year’s season. The playfulness of Koike’s style is more blatant here, as his object of focus is now a deck of playing cards: artifacts of amusement, not of serious, “real” life. These artifacts, in his vision, fall and, he reports, the universe echoes with their sound. Colorful cards fall and scatter just as the colorful flowers painted on them fall and scatter when their season of glory ends: plum blossoms, cherry blossoms and all the rest. But instead of presenting (as one finds in thousands of haiku) the falling of actual blossoms, Koike, in his senryu, presents the falling of blossom pictures. As with the dangling thrush of the first example, there’s something off-kilter, something magnificently skewed in this vision of tumbling cards. Their fall, which should produce no more than a delicate, scarcely audible pit-a-pat, instead makes the whole universe resound. Is this an absurd overstatement or a keen insight into physical reality? The proverbial butterfly flutters its wings somewhere in China and sets into motion a chain reaction that whips up a hurricane half a world away. If all the universe is, in fact, interconnected like this, then Koike’s absurdity isn’t really absurd. Or am I absurd in my rage for order, trying to dredge deep meaning from a joke? I have to wonder: Is Koike perhaps, unknown to himself, a Zen master? Are his senryu actually modern-day koan: conundrums with no logical solutions, devilishly designed to frustrate the rational, controlling voices in our minds? Of course, every poet who plays with meaning and nonsense need not be placed into the narrow category of Zen; Japanese haiku in the West, since the time of R. H. Blyth, has been overly painted with the Zen brush. Still, I can’t shake the thought that maybe enlightenment waits just ’round the bend if I can only learn to hear the crash of flower cards, the sound of one hand clapping. I’ll work on this, but first there’s the matter of the third example. 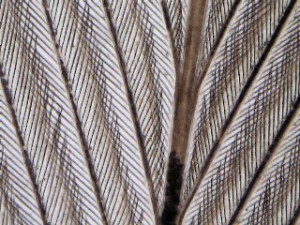 My girlfriend and I once lived in an apartment with a fine balcony. One morning, the door to that balcony left open, Kathleen heard scraping and banging sounds somewhere in the apartment but couldn’t locate the source. Months later, preparing for a trip, she opened a bag in the hall closet and discovered an enormous black bird with black, beady eyes. I was appointed to handle all the funeral arrangements. Only one word in the English language can evoke the smell I smelled that day: rank. That dead bird stank, rankly. And this poem about a sweater stinks too. I’m not saying that it’s no good, the poem. It’s just that it elicits for me a viscerally remembered smell. In Koike’s original Japanese the identity of the sweater-wearing bird murderer is left ambiguous: it could be “I” (the poet), as my translation has it, or it could be “he” or “she” or “they” or, even, “you,” the reader. Japanese allows for all these possibilities. Once again, the poet leaves ample room for the reader’s imagination to play. But no matter who is wearing that sweater, the bird is plainly dead. How should we feel about this fact? Should we feel sorry for the bird? Should we laugh at the scene’s absurdity? Or, should the rank smell in the sweater prick our consciences, since—unless we are strict vegetarians—people eat birds and, therefore, cause them to be killed? (Ah, a human foible: eating with no consciousness of what our food is!) Or (again!) I’m peering too deeply into the joke. Is my relentless search for significance in the sweater’s stench the biggest joke of all?

“What have we learned today?” the professor inside me inquires, and I answer him: “Well, we’ve at least learned one thing: that sometimes it’s plenty enough just to ride the seesaw. Go up, go down. It can’t hurt your imagination to take time out, now and then, and simply play.”