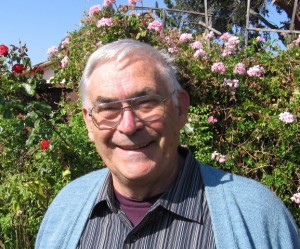 – President of the Haiku Society of America (1999)

– Vice-President of the Tanka Society of America (2000)

Perhaps his most remembered work though is a collection of his essays on haiku aesthetics, which also contains a selection of his haiku and senryū, published by Press Here in 2001, The Nick of Time: Essays on Haiku Aesthetics. It was the winner of the Haiku Society of America’s 2003 Merit Award for Best Criticism. A review of it by John Stevenson that appeared in Modern Haiku can be found here.

A page devoted to Paul on Wikipedia can be found here.

There is a small sampling of his haiku on Terebess Asia Online.

An announcement of his passing, and a warm tribute, can be found here on Blogging Along the Tobacco Road by Curtis Dunlap. On the same blog, in March of 2008, Paul participated in the “Three Questions” series.

Another tribute to Paul, with a collection of his Shiki Monthly Kukai entries, and a note from his wife, KerryLynn Blau, can be found at Haikuworld: Remembering Paul O. Williams.

A selection of three haiku by Paul O. Williams:

looking at the air
where the bear passed
last night