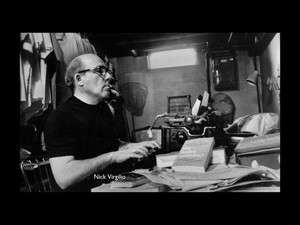 The HaikuLife Haiku Film Festival offers haiku poets and aspiring filmmakers the opportunity to ply their crafts in a variety of formats, including The Haiku Foundation’s trademark format, HaikuLife. More than a dozen such films will be on display on International Haiku Poetry Day, April 17. Culminating the events is a film in a longer format, which we designate as Feature Film format. This year’s feature film is Sean Dougherty’s encomium to Nick Virgilio, one of the first poets to bring English-language haiku to a larger audience, and to convince poets and scholars that the genre had a sufficient capacity to command a life’s involvement.