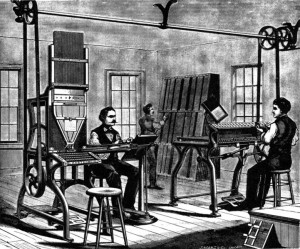 DailyHaiga (an edited journal of contemporary and traditional haiga) is a new online gallery, now up here, that will be publishing a new haiga daily. DailyHaiga‘s Editor is Linda M. Pilarski and its Associate Editors are Patrick M. Pilarski (Poetry) and Nicole Pakan (Artwork).

For those not familiar with the form, haiga is the art of combining a haiku poem (or other short poem) and an illustration of some kind. Fused into one, the two create a new, independent work of art.

Some other valuable sources on haiga for those interested:

Periplum’s own David G. Lanoue was recently interviewed for NHK while visiting Japan for the publication of his book, Haiku Guy, into Japanese: Part I, Part 2, Part 3 & Part 4.

I found it interesting to know that David, like myself, first discovered haiku through the work of J.D. Salinger. For him, it was a hokku/haiku by Issa mentioned inside Franny and Zooey that got him going:

For me it was two haikai/haiku by Bashō inside “Teddy,” the last story in Salinger’s Nine Stories:

Along this road goes no one, this autumn eve

David also repeats part of an interesting, and open, definition of haiku given by The Haiku Foundation’s founder, Jim Kacian: A haiku is, “as long as it needs to be, but as short as it can be.”

Episode 3 (Senryū, Son of Haiku) of Haiku Chronicles is now up here.

Over on The Huffington Post, Susanna Speier has created an ongoing section for what she calls Politiku. Speier writes that, “Politiku is my attempt to capture the ever morphing emotional response to the political landscape. . . Politiku replaces the traditional Kigo with a contemporary political reference.”

Though haiku have often tackled political subjects through the ages, both head-on as well as metaphorically, the aim and flavor of Speier’s Politiku seem closer to senryū and zappai. Only submissions written in 5-7-5, however, are accepted for consideration (and only selected ones are published on THP). This bow to “tradition” is a shame since it excludes many poets who compose haiku and short poetry who don’t prefer to do so by counting with their fingers. So, 5-7-5ers, put on your padding gear and helmets and dive in! Thus far, there have been calls for Politiku submissions concerning the topics of: Where Is My/Their Vote?, Father’s Day, Empathy, Memorial Day, Mother’s Day, and The Obama Administration’s First 100 Days.

For submission guidlines, click here, or here for the same and the latest topics.

Finally, a winner has been selected from among the 84 submissions sent in for naming the new (and next) troutswirl section, to be headed by Peter Yovu. The winner will be announced on July 4th. Thanks to everyone who sent in their ideas!