This week, New to Haiku is pleased to interview Nicky Gutierrez, current facilitator of the Ohaio-ku Study Group. Thanks for sharing your haiku journey with us, Nicky.

Welcome to New to Haiku, Nicky! How did you come to learn about haiku?

Well, like most people, I learned about haiku in language arts class in primary education. I started writing “haiku” my first semester in college during my literature class to help me stay awake. I also wanted to write a poem a day, and haiku helped me feel accomplished because of their brevity. From there, I started reading haiku from Bashō and the other masters, but it was not until I submitted to and was rejected by The Heron’s Nest where my haiku started to take form and actually look like haiku. That rejection pointed me in the right direction in my journey. The next time I submitted to The Heron’s Nest I was rejected again. However, the editor I submitted to, Julie Schwerin, noticed that I was from Akron and invited me to join the Ohaio-ku Study Group. After joining that group, I learned what haiku really is.

I consider Julie Schwerin to be one of my mentors as she is the person who introduced me to Ohaio-ku Study Group. She encouraged me to write and helped me see my worth as a haiku writer. Her guidance helped me continue to write haiku and not feel alone in writing it.

Jay Friedenberg is my official mentor for the HSA Mentoring Program. He has been a wealth of information for me and has connected me to HSA more.

The Ohaio-Ku Study Group in its entirety are mentors to me as well. There are great people there who I respect tremendously as individuals and haiku poets. It is an honor and privilege to be in the company of great poets and to be able to facilitate the meetings and events for the group. I love them to bits. The saying “it takes a whole village to raise a child” applies to them in mentoring me.

What advice has the Ohaio-Ku Study Group given you?

The advice I’ve always received from them is to read haiku, write haiku, and listen to other haiku poets.

I typically write at my desk. I have a practice where I write at least one daily haiku no matter if I have received a haiku moment that day or not. I usually write at the end of the day where I reflect on the events that transpired and write a haiku based on that, or an interesting phrase I heard that day, or I just write whatever comes to mind from my imagination. However, my best – what I consider my best – haiku are when I am out in the world experiencing it. So, I also write wherever I am. I pull out my phone and write a haiku in my Notes app and then later transfer it to my journal. Once I have about a month’s worth of haiku written in my journal, I transcribe them onto a Word doc and start editing them. I wind up with only a few haiku to submit to journals at the end of the process.

Get involved with a haiku group. I felt so alone when I first started writing haiku because it was such a niche genre that no one really wrote (I was obviously wrong – haha). Having that group to mentor you and have fun with really makes writing haiku more enjoyable and worthwhile. Don’t get me wrong, I love writing haiku for myself, but I feel so much more motivated to share my haiku with my group. If you’re more of an introverted person (I am a big extrovert), that’s okay, there are some online groups that are just as good! Getting that feedback from fellow haiku poets improves your haiku tenfold.

What are your favorite haiku that you have written? Can you share the stories behind them?

sleeping with you…
one Zoom
call away

This is a senryu, but I really like this poem because this was one of the first poems I wrote during the lockdown. The inspiration for this senryu was that I started dating my current girlfriend during the lockdown (I know, great timing!). And since we couldn’t be physically present, we did Zoom dates late into the night.

bell rings
through the snow—
time to pray

This haiku was written when I was on the, I believe, first monastery trip to St. Gregory’s Abbey in Michigan. I went with my friends for a weekend to learn about the Episcopalian Benedictines. It was a great trip where I bonded with some of my closest friends, and learned more about monasticism. I wrote this haiku before matins. It was dark out and I looked out my window and saw the abbey with all the snow falling down quietly around it. Then the bell rang forcing me out of my warm bed to go pray with the monks.

rocking chair—
there and back
a distant coocoo

I have a nice white rocking chair that was on my front porch at my college house. It was so nice to wake up in the morning during the spring and summer and just sit out there, rock back and forth, and listen to the world around me.

Congratulations on starting graduate school. I see that you are studying theopoetics and writing. What is theopoetics?

Honestly, I am still learning theopoetics, and it is a hard word to describe. My program is a writing program with a theological bent. From what I have learned, though, theopoetics is interdisciplinary, focusing on theology, philosophy, poetical analysis, the medium we use to talk about the Divine, our embodied experiences of the Divine, our creative processes, and creating. But here is a definition from one of the scholars. It is one of those things that when you do it, you know what it is.

A non-poet’s definition of theopoetics might be that it is a hybrid of poetry and theology. But to call it that misses the mark. It is an entire way of thinking. From the side of poetry, it shows that ideas are more than abstractions. They have form – verbal, visual, sensual – and are thus experienced as least as much as they are thought . . . What one learns from the theology side of theopoetics has at least as much importance. One observes that theology is more than an abstraction. It is a way of thinking, visualizing, and sensing images of God. And at that juncture, theologians should become aware that traditional theology . . . is a way to think about the divine but is only one of multiple ways to consider God. Thus for theologians, theopoetics will underscore their (sometimes reluctant) admission that theology is one form of truth but ought not be confused with TRUTH itself.”  — J. Denny Weaver

You are one of the younger poets in our haiku community. What do you think could be done to attract and retain a younger audience as well?

I think what the English-language haiku community could do is continue being authentic, sincere, and awesome. Also, inviting young people to a meeting or conference can go a long way for someone. I would never have gone to the Ohiao-ku Study Group if Julie [Schwerin] had not extended her hand out to me first. I stayed in the community and continued writing because of the people I met there and in the broader English-language haiku community. There are so many wonderful people in this community. There are so many times where a fellow haiku poet has referred me an article or book to read, or lent me a book or given me a book of haiku, or answered my questions, or given me feedback, or told me about a journal or event happening. If we all continue to help and mentor people, I feel that we can bring some younger audiences in and retain them. Keep being loving and kind people as you typically are. 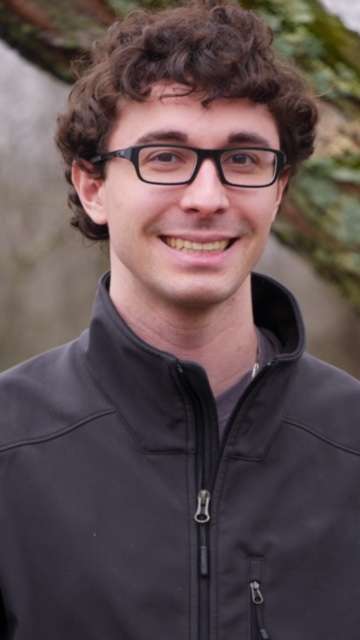 Nicky Gutierrez is an Ohio haiku poet and has been leading the Ohaio-ku Study Group for almost a year. He recently graduated from Capital University, and in the upcoming fall, he will be attending Bethany Theological Seminary where he will be earning his Master of Arts in Theopoetics and Writing. He has two bonsai trees – a real one and a LEGO one – both of which he take cares of. You can find him on Instagram @nicky_g_writes and his website nickygwrites.com.