Today at New to Haiku, let’s meet Mary White. A talented artist and poet, her haiku (and senryu, haiga & haibun) have appeared in cattails, hedgerow: a journal of small poems, Frogpond, The Heron’s Nest, Presence, Blithe Spirit, The Mainichi, The Haibun Journal, seashores, Tandem, and Failed Haiku. Thanks for sharing your haiku journey with us, Mary. 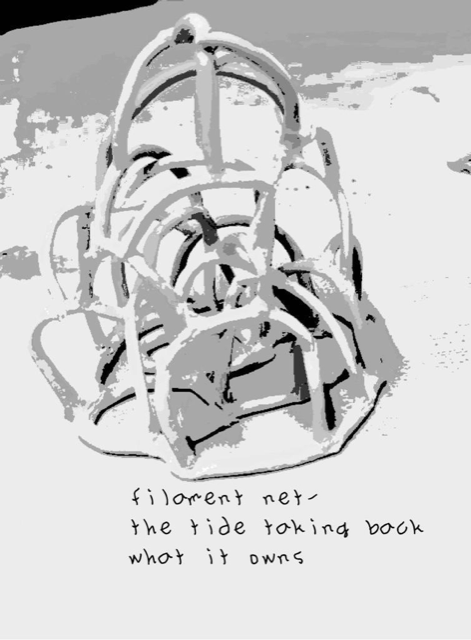 Welcome to New to Haiku, Mary! How did you come to learn about haiku?

My first encounter with haiku was during a meditation and creativity workshop twenty years ago. We were given brief instructions and then we walked around a local park. I wrote three passable haiku in a seven/five/seven syllable format. I guess I didn’t take good instruction notes.

Ten years later, I saw a Haiku Ireland meeting mentioned in the Irish Times so I went along to the Chester Beatty Library to see if I could learn more. I looked around the café and saw a bearded man writing in a notebook, so I went over to his table. He asked me if I was there for the poets. We chatted and drank tea, and he shared his apple tart with me. He told me that he started writing haiku in the back of a van when he was touring with a folk group. Haiku Ireland was doing a ginko in the locality that afternoon. He told me was from Marino which is 5K from the city centre and that he didn’t really know Dublin at all. He was such an unassuming man I was very surprised to learn that his name was John Sheahan, and his folk group was The Dubliners which is probably the most famous Irish folk group. I attempted 5/7/5 haiku when we workshopped our notes later.

Going on a ginko was my first experience in writing haiku and was a lively start. It brought me into a community of haiku poets. My attraction to the form may be influenced by my parent’s hearing loss when I was a child. They had normal speech but could only lip-read. That probably sharpened my ability to find the essence of what I needed to say. Not easy when I’m so chatty!

I have had a lot of encouragement over the years, and I find participating in group activities motivates me. Maeve O’Sullivan encouraged me to submit when I was active in Haiku Ireland. Norman Darlington introduced me to The Renku Group at a time when my daughter couldn’t attend school because of her fibromyalgia. Writing renku gave me great support. I learned so much about the “haiku way” from writing renku with the brilliant haiku poets who participated. I’m a member of The Pepper Pots Haibun group and that is a good stimulus to write, and I get very thoughtful and useful feedback. Roberta Beary is a dear friend who sends me reminders about deadlines. In 2021, I participated in the TRIVENI Gurukulam Mentorship Program which the wonderful Kala Ramesh set up. Kanchan Chatterjee was my mentor, and he helped me analyse my haiku technique. He concentrated on traditional ways and rules which was very grounding and beneficial.

Did someone else’s haiku greatly influence your own?

My go-to haiku poets who I read the most are :

piano practice
in the room above me
my father shouting

Roberta has fearlessly written haiku which portrays with poetic simplicity difficult and painful memories. This has given me courage.

scrambling for words–
a birdsong in flight
deep in me

Kala writes like an artist and I am an artist so her haiku really resonate with me. Her refined intelligence and enthusiasm for haiku and related forms are inspiring.

under the evening moon
the snail
is stripped to the waist

Kobayashi Issa is my favourite of the old masters. He writes with humour and tender pathos.

reading a play
dishes left in the sink
this winter night

Sugita was one of the first women to write modern haiku, and she is equal to her male contemporaries.

I read haiku every day. I subscribe to journals and read haiku online. When I read haiku that connects to someplace deep inside of me, I then buy a collection by that poet.

Do you have a writing process?

I have been writing haibun for an hour each morning this year and that is the most structured I have ever been. Sometimes writing haiku deepens my experience of being somewhere, seeing something in nature or it expresses something I wasn’t fully aware of.

Where do you most often write?


I write in my living room, curled up on the couch or sitting outside early in the morning. My house is over 200 years old and there is a crab apple tree outside the bay window. We have four seasons in Ireland and sometimes we get the four seasons’ weather in one day, so the constant change is inspiring.

Read haiku and then read more haiku. Read the masters and read new haiku from around the world. Read:

hesitating
in my prayers–
Linnet song

cradling her belly–
the wait for someone
who is already here

aging hands
my mother’s eternity ring
fits me at last

This last haiku has a constellation of meaning for me. It reminds me of trying on Mum’s jewellery and make-up when I was a child. She often mislaid her engagement ring, and I would be the one to find it for her. Another time, I went to the pawnbrokers with her to sell an engagement ring given to her by an old flame who abandoned her when she was extremely ill and in a coma. She died months after I got married, and her engagement ring was never found. So, her eternity ring stands for all those different stories.

I led four Learn and Share Haiku courses during the pandemic lockdowns and restrictions. This was a very successful way of engaging with beginners and I taught 27 newbies. Two were in their mid-eighties which gave me joy.

I woke this morning and remembered something very close to my heart. Six years ago, my granddaughter was born profoundly deaf. My mother was also profoundly deaf and my father had severe hearing loss. I wrote a haiku sequence and my acapella singing group Chaos in Hermony put it to music. Together we devised and performed a piece using silence, spoken word and singing. It was a very healing experience both me and my family.

I have written haibun about my childhood and growing up with deaf parents. This is a work in progress, and I have already had some of them published in The Haibun Journal and Failed Haiku. I have enough for a chapbook so that is a strong possibility.

Can you share about the work you’ve done to engage people with disabilities in art and haiku? What has been the most rewarding part of this experience?

In 2019, I led a day-long workshop in sumi-e ink painting as part of the One Breath: The Reluctant Engagement Project for Clan Beo. Clan Beo is an organisation that works to empower the intellectually disabled people in Westport, Ireland. The artists responded to haiku written by Roberta Beary for the project. (Note from Julie: The resulting collection, One Breath, earned a place on The Haiku Foundation’s Distinguished Books Award Short List for 2021.)

Some of the attendees had intellectual disabilities and responded so well to the haiku. I used some Qi Gong exercises to bring everyone into a sense of flow and presence. Their parents were there as well, being creative, so that was good for a sense of security. Using the simple materials of paper, rice paper, black and white poster paint and ink made creative choices easier. The spontaneous strokes and marks made some beautiful gestural art. Their fine sumi-e art was collated and paired with haiku and prose, and then compiled into an album. At times there was a feeling of deep peace in the workroom, and I could feel their concentration. 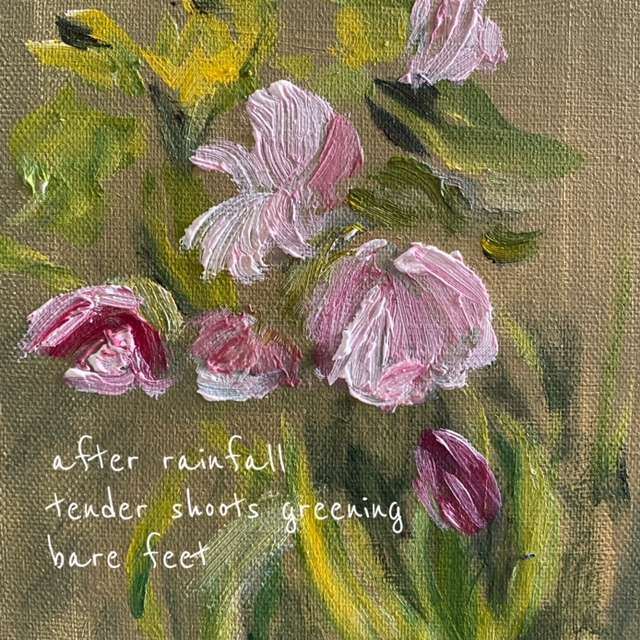 Mary White is a retired librarian who lives by the sea in Sandycove, Co Dublin, Ireland. She swims most days in the sea.  She writes haiku, haibun, haiga, renku and rengay and teaches Learn and Share Haiku, a Zoom workshop. Her work as a visual artist is imbued by her love of haiku. She is married and is kept busy with 4 granddaughters and 2 Springer Spaniels.