This week, we continue our interview with Kala Ramesh, the notable Indian haiku poet. You can meet Kala and learn more about her in the first part of our interview here. Join us next week for the conclusion, in which Kala gives specific advice for those just beginning their haiku journeys.


This week’s question for Kala is: Where do you most often write? Do you have a writing process?

My morning hours are best for creative work and it was so even when I was into music practice. To me each morning is an unwritten slate, and the impressions I make come from a depth of truth, which is what I would like to believe! In Sanskrit, swa means self and ra means light or to bring forth, meaning when the artist touches her ‘soul’, we say her art (be it music, painting or writing) is ‘felt’ and when that happens, like a pendulum which swings from left to right – the work swings out to touch the reader. Without doubt, a long journey…

Mine has always been a labour of love. I do go over a poem several times or at times I just leave it aside and allow it to gestate! I don’t have any fixed writing process as such. I have a group of poets with whom I share my work and we critique each others’ poems in a healthy way.

We all have an urge to create – haikai is my way of giving expression to this urge. Whether in haiku, tanka or haibun, when we are able to introduce dynamism into an image with concise language – the poem, we say, becomes alive. In Indian thought, this is called ‘prana pratistha’. This transformation fascinates me.

When being in nature and when observing people, my eyes become the camera and my mind becomes the paper. The poem then happens in the isolation of my room – all creation happens in and from silence, doesn’t it? 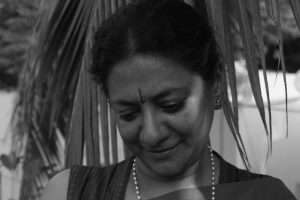