skip to Main Content
Menu
This week, New to Haiku is pleased to interview Joshua Gage, co-editor of Otoroshi Journal and the author of breaths and Origami Lilies. Thanks for sharing your haiku journey with us, Joshua.
In Advice for Beginners posts, we ask established haiku poets to share a bit about themselves so that you can meet them and learn more about their writing journeys. We, too, wanted to learn what advice they would give to beginning haiku poets.

Welcome back to New to Haiku, Josh. How did you come to learn about haiku?

When I was an undergrad, Robert Hass’s The Essential Haiku came out. Joan Larkin, my teacher, encouraged us to experiment with the form, so we wrote what we thought were haiku, but they were bad. However, we knew enough to know that 5-7-5 wasn’t the goal, so baby steps. Then, the next year, my poetry teacher Tracie Morris introduced me to The Haiku Handbook by William J. Higginson and Penny Harter, and my mind was blown. I started writing “better” haiku, but they still weren’t great. I dabbled on and off until I started working with Gene Murtha, Ferris Gilli, and others, to learn about the key elements of haiku.

Ferris was the one who really ripped me a new one when I started submitting, and made it clear that what I was doing wasn’t working. We had a lot of back and forth arguments, but her essays and checklist on haiku really honed my skills. As far as haiku influencing me, I think its painfully clear that I am a ripoff of Dr. Lenard D. Moore and his jazz stuff and Roberta Beary and her divorce stuff. I’m not even close to their phenomenal talent, but my reading fees are cheaper, so that’s a plus?

My writing comes in bursts. I’ll go for a walk, gather images, and churn out twenty haiku, one or two of which are worth keeping or editing. Alternately, if I’m writing to a theme, I’ll gather images from that theme and pair them with kigo from a saijiki (a list of kigo).

Voraciously? I love reading haiku, and anytime there’s a sale or something from one of the two big haiku presses, I try to buy what I can. The problem is that haiku is niche within niche, so things either go out of print quickly and/or are soooo expensive as to be prohibitive. I’m starting to enter more contests, though, so once I make my haiku millions, I’ll be able to afford more books.

Read. Listen. Be humble, but be assured of your truths. The biggest problem I see with beginning poets is that they get a book or read a journal, and don’t delve deeply enough. More often than not, the books that they’ve discovered are not the best guides, so they come in thinking they’re experts when they’re mere beginners. I know some have even tried to start teaching haiku, which doesn’t serve the community at all. So I’d say read everything one can on haiku, gather all the knowledge one can, and listen to editors and other folks in the community.

However, don’t be afraid of your own voice or your own truths. Too many of the powers that be in English language haiku are afraid of innovation, experimentation, and taboo topics. ELH can’t expand without new voices, and those voices need to bring their own truths to haiku. We need more haiku from minority and oppressed voices, but the folks in power are terrified of this. I’m hoping with enough new energy we can topple the power structures in the community that are preventing us from growing and expanding.

I really enjoyed your Imagery in Haiku presentation. What advice do you have for poets giving the first public reading of their work?

Study slam poets and how they present. Study speech writing texts and videos and learn those techniques. Reading and performing haiku is not different than reading or performing other poetry. It’s just shorter, so the skills need to be compressed or magnified, depending, to get the desired effect. But there’s really nothing different between reading haiku aloud and reading other poetry or other writing.

I recently published The Ohio Haiku Anthology, which is the first anthology in twenty years of haiku poetry from across Ohio. I’m very proud of it, but selling and promoting it has been difficult. Less “joy” and more “honored, but righteously angry” concerning that.

Also, Lori A Minor has honored me by co-editing Otoroshi, our magazine of horrorku (horror-themed haiku). She’s a phenomenal poet and incredible editor. Her journal, #FemkuMag, is so influential and daring and necessary, really pushing the boundaries of what haiku can accomplish. I’m just lucky to be along for the ride. 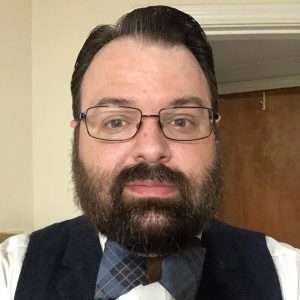 Joshua Gage is an ornery curmudgeon from Cleveland. His newest chapbook, Origami Lilies, is available on Poet’s Haven Press. He is a graduate of the Low Residency MFA Program in Creative Writing at Naropa University. He has a penchant for Pendleton shirts, Ethiopian coffee, and any poem strong enough to yank the breath out of his lungs.