This week, New to Haiku is pleased to interview John Stevenson, longtime managing editor of The Heron’s Nest and host of The Renku Sessions here at The Haiku Foundation. Thanks for sharing your haiku journey with us, John.

Welcome to New to Haiku, John! How did you come to learn about haiku?

Haiku was basically a crossword puzzle word for most of my life. I had been writing and publishing other poetry for about thirty-five years before I heard my first haiku. And it didn’t happen in a poetry context. I was at an international theater workshop and a Japanese actress shared her favorite poem with me – a Bashō haiku. There was no mention of syllables but she did share with me an impressive set of cultural references, for which this tiny poem was a busy crossroads. That was in the summer of 1992 and, while I continue to write longer poems, the vast majority of my work since then has been in haiku and related genres.

I was fortunate in the haiku editors that I first encountered: Francine Porad, Bob Spiess and Elizabeth Searle Lamb. They were direct, encouraging and accurate about what I needed to know about English-language haiku. It would be difficult to summarize the advice they gave me. It came a little at a time, over a period of several years. I was receptive and interested in improving. That, I think, is what I brought to the table. Almost everyone who is good at English-language haiku has been influential to me. In the early days, the poets I learned from most prominently were Cor van den Heuvel and marlene mountain. I also learned from the work of John Wills and Nick Virgilio, though both had died before my haiku journey began. Many of my contemporaries have been influential. Close friendships with Tom Clausen, Jim Kacian and Christopher Herold have been and continue to be important to me. My involvement with renku has been influential in giving me a better idea of how haiku relates to its origins. My first renku partners were Ion Codrescu, Fay Aoyagi and Christopher. When I realized that all three of them had been taught by Shinku Fukuda, I contacted him directly and had the privilege of working with him during the final five years of his life.

Haiku inspirations seem like dreams to me, in the sense that they have to be recorded as soon as possible. Even a short delay can cause them to evaporate. So, my process has to do with immediate capture. I have some kind of recording device with me at most times. The application of craftsmanship can be accomplished at leisure but inspiration is precious and fleeting.

This is paradoxical. My favorite kind of English-language haiku is likely to seem so simple and transparent in the first reading that it seems almost nothing. But it rewards subsequent readings, sometimes many subsequent readings, and continues to “unfold” over time. As an editor, however, I have to read a lot and to make rather quick assessments. Clearly, I risk missing poems that I would love, should I give them more attention. So, I am forever trying to strike a balance in this regard.

Also, as a poet, I don’t have to read many good haiku before my own inspirations begin to intrude in the reading process. So, I am often reading and writing in the same sittings.

You have been the managing editor at The Heron’s Nest for fourteen years. When you evaluate haiku for inclusion, what are you looking for? What makes a haiku stand out from the slush pile?

We don’t have a slush pile and, in fact, I want people to realize that we send back many good poems in each selection cycle. If we tried to publish every good haiku that we got, each issue of The Heron’s Nest would contain three to five times as many poems. But my feeling is that this would not make for a better reading experience. Haiku demand effort from the reader and too many, even too many good haiku, is not necessarily the best thing for readers. I liken it to a banquet. It’s very possible to get too much of a good thing.

Regarding what we are looking for, The Heron’s Nest has always described this on its website’s submissions page. It must be admitted, though, that this is the base or norm we are working toward. But we have always been willing to consider work that is somewhat outside of those parameters.

I expect that what I would say here is pretty much what everyone else must have said. But it’s still the best advice:

I love leading and taking part in live workshops. I love the collaborative experience of writing renku, especially in live sessions. Bill Higginson, Penny Harter and I gave a series of live renku and dance performances with Sachiyo Ito and Company, in which the work was produced spontaneously, before a live audience.

What are your favorite haiku that you have written? Can you share a story behind one or more of them?

Yikes! I tend to be unable to recall my haiku without something specific to remind me of one. The following two have long back stories; of two and nine years, respectively. But these back stories are not necessary for appreciation of the poems.

a deep gorge
some of the silence
is me

I will just say, about the first one, that deep gorges are an important feature of the Finger Lakes region of New York State, where I grew up. And about the second one, the back story relates to my goddaughter, Seneca Kennedy, who spent nine months in hospitals fighting liver cancer when she was four and five years old.

My current book is a project unlike anything I’ve done before. My Red is a selected haiku collection, drawing upon nearly thirty years of my writing in this genre. Unlike my previous haiku books, this was a collaboration with a group of selectors I deeply respect. Also, for the first time, I have made a video trailer to promote the book. I’ve been inspired by the video presentations of haiku by several of my peers and wanted to try it myself. The book and the trailer have proven to be joyful new experiences.

One of the best surprises for me has been how many great friendships have grown out of my involvement with English-language haiku. This is true of a wide circle of poets and, most particularly, of my local group – The Route 9 Haiku Group – consisting of Yu Chang, Tom Clausen, Ion Codrescu, Mary Stevens and Hilary Tann. 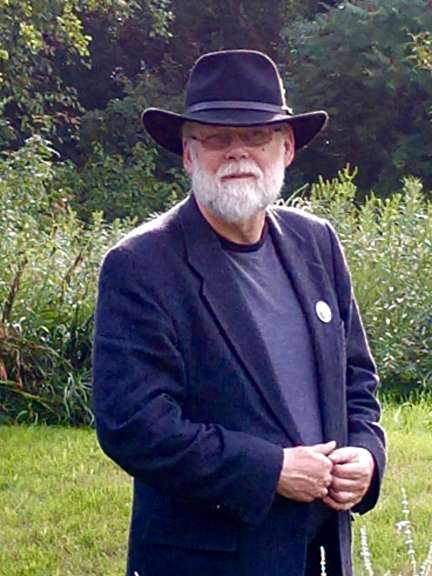 John Stevenson is a former president of the Haiku Society of America, former editor of Frogpond, and a founding member of the Route 9 Haiku Group. Since 2008, he has served as managing editor of The Heron’s Nest. Click this link for a preview of his most recent haiku collection, My Red.