skip to Main Content
Menu
This week, New to Haiku is pleased to interview John Hawkhead. John is currently working on his second collection of haiku; his first book of haiku, Small Shadows, was published in 2016. Thanks for sharing your haiku journey with us, John.
In Advice for Beginners posts, we ask established haiku poets to share a bit about themselves so that you can meet them and learn more about their writing journeys. We, too, wanted to learn what advice they would give to beginning haiku poets.
Welcome to New to Haiku, John. How did you come to learn about haiku?
Back in the 1990’s, I was part of a poetry group in Somerset, England. It was where poets critiqued each other’s writing and shared news and ideas in the poetry world. One of the group read out a haiku accepted for publication by IRON Magazine. She also told me about a little hand-made magazine called Bare Bones edited by Brian Tasker. I had a go at writing something, sent it off, and, amazingly, got an acceptance. When the magazine arrived in the post, I could see that my little poem wasn’t the same as the other writers’ work including, among others, marlene mountain, Jane Reichhold , Alan Summers, Jim Kacian and Tom Clausen. My contributions were micropoetry rather than haiku but Brian included them anyway. Brian also published my first haiga and told me about a new magazine I might be interested in called Presence being launched by Martin Lucas. My journey into haiku started there.

I haven’t really had the benefit of a mentor, but Martin Lucas in particular was a very encouraging editor. I had submitted short poetry to Presence for Issue 1 and he was kind enough to accept one poem and to explain why he hadn’t accepted others. When the first issue dropped through my letterbox, I sat down and read through writing from people I didn’t know from all over the world. It included haiku, senryu, renga, tanka, haiga, art and an essay on Haiku North America 1995. It also closed with an endpiece haiku by Alan Summers whose writing has definitely been an influence.

Martin died tragically but I still regard him as the one person who really keeps me in the haiku ‘fold’. If he hadn’t encouraged, advised and guided me it’s likely I would have left haiku to others. I didn’t meet Alan until 20 years later but he too has been kind and supportive about my writing.

Two places really, although haiku can arrive out of the blue at anytime and anywhere. I’m lucky enough to live near open countryside where I can walk by the river or through woods. Simply walking on my own and letting my mind run free will often spark an idea or even a fully-fledged haiku. Spending time alone and just thinking about the world helps to declutter my head.

I also write in bed just before turning out the light. That ensures I look at my haiku differently in the morning and can be more objective about what I’ve written. It can be too easy to write something down and then walk away thinking it’s finished. Just recently I have revisited haiku I wrote 20 years ago and completely revised them. It’s never over…

One tip I have that others may find useful when editing your own work is to keep a running track of recent poems in a grid/table of five or so columns.

When you first write a haiku, put it in the left column of the table. Don’t look at it for a while then edit a copy in the next column and compare/think about the changes you made (don’t touch the original).

Then do it again in column 3 by taking words out, changing line order and adjusting the structure in the new version – maybe go from three lines to one line – until you think you’ve had enough!

Look across the grid and see what happened — were you shortening, lengthening, trying to be too clever, trying to be too ‘zen’? Is it better with fewer words or with line order presented differently?  Do you think you improved the original or made it worse?

Also, try to write the poem again without looking at the original version or other edits for a couple of days. It may be that you arrive at an entirely different perspective on the same haiku or even an entirely new haiku. Put your new one in the grid and compare with the original — is it the same, better, worse, something else? Decide on the one or maybe two that work best for you. This might seem over-structured, but it may help when you are getting to grips with haiku and senryu.

I do find it inspiring to read other writers’ work, particularly in styles or on subject areas that I find more difficult to work in. I’ll read the latest issues of NOON: journal of the short poem, for example, and try to understand why I don’t understand poems in it — I often don’t, but the experience is worthwhile as it can spark innovation in my own writing. A similar approach goes for when I get rejections. Why did an editor decide other people’s work was preferable? If I compare the published work with the poems I submitted, then I can usually see that I could have done better.

One thing I definitely try to do is just read one haiku at a time, give it time to get into my head and let it settle down. Really good haiku need to be read more than once even if the initial impact is very strong. Let the poem do its work and spark all those images, feelings and sensations in you. It’s often the case that people reading the same haiku encounter different meanings and resonances, so reading a poem more than once can open up subtleties and sparks of imagination that were not immediately obvious.

Be honest with yourself about why you are writing. If your aim is to have your work published in specific places, then take time to read the editorial advice on what the magazine or website is looking for. If you are writing for the sheer enjoyment of it, or as a mindfulness practice, or even as an exercise in brevity and conciseness, then that is great. Whatever your reasons, try not to ‘force’ your writing or rush to an outcome. Give yourself and the poem time. If you are lucky enough to have a haiku or senryu present itself to you as a finished poem then it’s still worth putting it aside and coming back to it later to see if it has the same impact.

Once you think you have a finished haiku, ask yourself why you wrote it. What was your purpose? Is it something new? Does it open up new understandings or shine a light on why the ordinary is actually extraordinary so a reader sees it differently or recognises what they have been seeing all along but haven’t registered?

Before you submit a poem to a journal, ask yourself “So what?” about it. Yes, the clouds in the sky might be beautiful, but what is it about that moment in your life that stopped you in your tracks and made you want to write about it? Haiku have to open our eyes to see things we didn’t see despite looking at them every day. So do capture moments of beauty, horror, disgust and wonder, but use your craft to truly open the experience for others to encounter, enjoy and engage with.

Oh, and one more thing — you don’t need to count syllables.

I’ve been lucky enough to write some joint renku, renga and cherita with Hifsa Ashraf, John Stevenson and Marion Clarke. This is a great way to expand or experiment with your usual writing style and to work with other writers collaboratively. If you haven’t done it already, why not ask someone to write with you? It’s fun and you can end up with something you might never have arrived at on your own. Just decide on a loose theme or start with an opening verse and run with it. I recommend it.

I also ran a haiku writing competition for colleagues at work during the national lockdown. My colleagues also got their families involved. We started with basic rules and then people wrote as many poems as they wished. Not everyone got there, but most really enjoyed the challenge of something that was very different for them — especially the children.

This is a difficult question as the haiku I like best change all the time. So I’ll choose two because they remind me of my now deceased parents and the laughs and tears that still echo from my past:

dad and I
opening up
about our mothers

‘Misted air’ won the best of issue award in Presence #65 and then the October slot in the 2021 Haiku Calendar Competition. I’m not choosing it because of its success but, as years go by, the past becomes an increasingly misty place so it’s good for me to record these memories. ‘Dad and I’ is from Kingfisher #3 and, I hope, touches on that English male reserve that takes time to demist.

I’m working on a project, but it’s not really joyful as I’m struggling with it. I’d like to publish a second collection but I have reached the stage where I can’t see the wood for the trees. What to put in, what to leave out? Go with my gut or with ‘successful’ poems? I’m sure I’ll get there, but it has proven very difficult so far to sift out the haiku and senryu that would make a cohesive publication.

Read the other Advice for Beginners columns in this THF series — they are all good. Nothing is gospel, nothing is sacred, but it’s still worth listening to established practitioners even if they are still learning themselves. 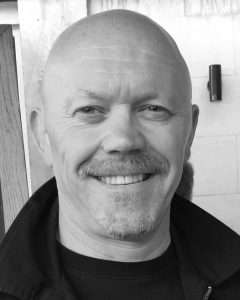 John Hawkhead has been composing haiku, senryu, haibun, and haiga for more than 20 years. A haiku of his won 1st Prize in The Haiku Foundation’s HaikuNow! Awards (2013) and another was shortlisted in the THF Touchstone Awards for Individual Poems (2018). He has also been honored in the Lincoln Underground Haiku Contest 2016, the Vancouver Cherry Blossom Festival 2019, the “AHA” Haiku Contest of the United Haiku and Tanka Society 2020; the Snapshot Press Haiku Calendar Competition 2020 and 2021; and the Setouchi Matsuyama Haiku Contest 2021. With more than a thousand published poems, Hawkhead has been listed on “The European Top 100 most creative haiku authors” for the past ten years. His book, Small Shadows, was released in 2016.