This week, New to Haiku is pleased to interview Robin Anna Smith (aka GRIX), a 2019 Touchstone Award recipient and co-editor at Sonic Boom and Yavanika Press. You can watch their recent stand-out presentation at the 2021 Haiku Society of America conference here: Signature Style: How Identity Informs Voice in Haiku. Thanks for sharing your haiku journey with us, Robin.

In Advice for Beginners posts, we ask established haiku poets to share a bit about themselves so that you can meet them and learn more about their writing journeys. We, too, wanted to learn what advice they would give to beginning haiku poets

Welcome to New to Haiku, Robin! How did you come to learn about haiku?

I learned about haiku, like many people, in school. Back then, I abhorred writing of any kind, so I never practiced it outside of assignments. However, after having a stroke and losing the use of my hands and legs, I lost my ability to create art as I was accustomed to; I also lost much of my vocabulary. I decided to try writing haiku as a creative outlet as well as to exercise my mind. I quickly learned that the old “rules” I learned in school were far from “goals.” I read every “how-to” haiku book I could get my hands on but the only one I remotely cared for was Writing and Enjoying Haiku: A Hands-on Guide by Jane Reichhold. It was the only one that I felt was open-minded, practical, and non-dogmatic. From there, when I would encounter haiku I found deep resonance in, I’d study the bodies of work of those poets and analyze their poems, studying which tools they used to make their haiku outstanding.

I’ve had the benefit of having Alan Summers as my mentor throughout much of my haiku journey. I sought him out after reading Does Fish-God Know; I felt I had finally found someone who might be able to help direct me as I felt lured away from all the “supposed to’s.”  His two biggest pieces of advice have been to always trust my voice and to never be in a hurry. These are things I try to pass along when I see newer poets being discouraged from expressing themselves or trying to keep up with submitting to absolutely everything, only to be putting out work that is below their personal standard. Newsflash: Editors regularly publish good work that might have been great had it been given some simmer time. Rushing runs the risk of publishing work before its time. As far as influence, I’m not sure exactly how their work has influenced my own, but they have definitely influenced how I think about and approach haiku: Alan Summers, Fay Aoyagi, Cherie Hunter Day, Shloka Shankar, the late Stuart Quine, and the late Jan Benson.

I write in the bath, in bed, in the passenger seat while on the way to doctor appointments, in the recliner while getting my ketamine infusions, in my back yard . . . My only process is to try to quiet my mind and let my focus gently fall where it may. Sometimes I employ a level of altered consciousness to get what I feel are my best poems. I rarely record a full haiku or experience, but I bank words, phrases, feelings, and images that reveal themselves to me. Later, I will go through my bank and imagine the juxtaposition (if there is one) or make connections with other images/ideas from my word bank. Then I let them sit, sometimes for months, then edit, steep, edit, steep . . . It’s not unusual for it to take me 6 months to finalize a 5-word haiku, so I don’t get a ton published, but that’s just fine with me.

First, I always read them aloud. This is incredibly important to me. Haiku should sound good – that is just personal preference, of course – and I want to hear it, see it, and feel it coming from my mouth to really engage. I read the same haiku numerous times with breaks to let the poems soak in. I might type the ku into a Google sheet and perform vivisection, breaking down the rhythm/meter, bolding/italicizing the assonance/alliteration/dissonance, and color coding other poetic devices (I regularly do this with my own haiku when composing as well). Yes, it is a slow process! But I like to get into the guts of poems and not just skim the surface. Obviously, I can’t go this far with every poem, but after reading a few times, some that “stick” ask to be further examined.

Write what you want! Don’t listen to people who have nothing nice to say – they may not know what they are talking about or are hell-bent on preaching dogma (Been there!). Just because someone is published a lot doesn’t mean you should be trying to emulate them. No one else can be you or encounters the world in the same way, so write the best YOU brand of haiku that you can. Compete only against yourself. Don’t buy into the “winner” narrative – it only feeds negativity. And, it’s never too early to be thinking about your signature style.

I don’t like the idea of favoriting my work because it’s like saying I have favorite parts of myself, and I am not fragmented. I try to love all of my poems and if I don’t, I dismantle them and send them back to the chop shop (my word bank).

Oh gosh . . . I have a lot going on that I’m excited about. The First Annual Trailblazer Contest, which I co-founded with Shloka Shankar, is starting up this year in August and I’m excited to get that off the ground. It will be a contest like no other . . . more of an online anthology which will feature discussions with the authors about process, analysis, etc.

I just started helping Bruce Feingold with the Touchstone nomination process. We’re going to make it more streamlined, and this will reduce some workload as it is a very labor-intensive process. I’m happy to be able to lend my assistance to the community in that way.

I’m co-editing at Sonic Boom and Yavanika Press with Shloka Shankar, which I just love as working with her is pure joy! I’m reading at kontinuum, which I’m excited to see where it goes. I’m a huge fan of Adam’s (co-editor Ádám T. Bogár).

I’ve got a new book of haiku in the works that I’m excited about as it will be longer than my previous mini-chaps and reveal a bit of a reset button for me. Perhaps a “B-side” people are less familiar with.

And some other surprises depending on how wiped out I am . . . I was supposed to be taking this year off to just write but that hasn’t really happened!

What do you see as the future of haiku? What directions would you like to see haiku take?

I would love for haiku to simply be “allowed” to go where it wants. I’d love to see more people (established and new) breaking out of prescribed molds and move away from checklists toward artistic expression. And of course, more true diversity and inclusion

New voices are some of the most important voices in the community. New perspectives can really energize the community if we allow them. We need to get past our laddering system with newcomers at the bottom “paying dues” and a dozen or so “haiku gods” at the top. Not everyone’s learning process is sequential, and one person’s trajectory may be quite different from another’s. We should all be learning all the time. No level of haiku knowledge is a pass to stop challenging ourselves.

Respect the process of evolution in your craft. Work toward writing the best haiku only you can. Haiku as a whole should be in a constant state of movement.

Read and share a variety of work from a variety of poets. Don’t just look for the work of people you know or that of the “keyholders” in journals. Everyone’s voice is important and we can learn a lot from new haiku poets if we pay attention. We need to strive for balance. But a scale is oriented horizontally – not vertically.

Volunteer. Whether it is an administrative position at THF, posting on social media for a journal, editing, helping run contests, etc . . . there is a place for YOU to get involved. Don’t be afraid to be direct and ask. Most places don’t advertise that they need help, but as almost everything in the community is volunteer, everyone and everywhere can use some help, and people are really thankful for it! 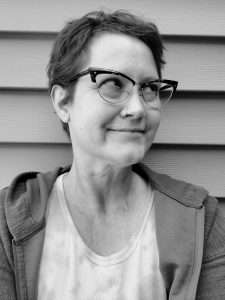 When not duking it out with faulty autonomics & a spine that belongs in a circus sideshow, Robin Anna Smith lies in bed, dreaming up ways to preserve their head in a jar & communicate telepathically via Ouija board. They read for kontinuum & co-edit at Sonic Boom & Yavanika Press. Twitter/Insta: @komadorihaiku http://www.komadorihaiku.com