When you are New to Haiku, you may not know anyone who shares your interest in this little poetry form. We asked established haiku poets to share a bit about themselves so that you can meet them and learn more about their writing journeys. We, too, wanted to learn what advice they would give to beginning haiku poets.

This week, we conclude our interview with Crystal Simone Smith, managing editor of Backbone Press, and a general editor of Juxapositions, the haiku research and scholarship journal of The Haiku Foundation. You can read the first part of her interview here. Thanks for sharing your haiku journey with us, Crystal!

For those just starting out with haiku, what advice would you give?

As we say in the academic world: “find your nerds.” Seek out local haiku poets. True, they are not everywhere, but there’s almost always a splattering of us somewhere near. Community is the key to the palace. Obviously, you must read haiku often, and essays on haiku writing. Also, familiarize yourself the Masters and Japanese culture like understanding the significance of cherry blossoms. Pay close attention to the world, not the fire truck commotion across the street, but birdsong, wind gust, and cloud shift. Keep a pocket notepad handy to record “aha” moments.

What are some fun ways you have used or experienced haiku?

Of course, being present in nature—the long walking path, the local botanical gardens, or even running— can conjure haiku moments, but I experience many haiku moments when I travel, particularly at ocean shores or in the bustle of sparkling cities. However, I don’t think that’s true for those who find traveling stressful. In truth, it’s most fun when it’s unexpected, like a sad moment at the fairgrounds and a funny moment in a graveyard.

What are some favorite haiku that you have written? Are there any stories behind them?

another mass shooting
my son practices
his trumpet solo

All shootings are horrific, but school shootings are unbearable. For weeks after, we are left with their photos, candle-lit vigils, and thoughts and prayers from our governance. To a news hour, my son was practicing trumpet alone in a room upstairs. The scene reminded me of Taps played at the gravesite of my estranged father.

winter beach
a golden retriever
runs off his leash

I have always loved the ocean. My partner and I decided to head to the beach one year for his December birthday. It’s a city beach with lots of fine dining. Having never gone in the winter, we discovered the summer rules didn’t apply: free parking and pets allowed. I’m not a dog person, but I felt that retriever’s joy, all of it. The haiku that follows was written that weekend too.

lost in the city
quarreling
under one umbrella 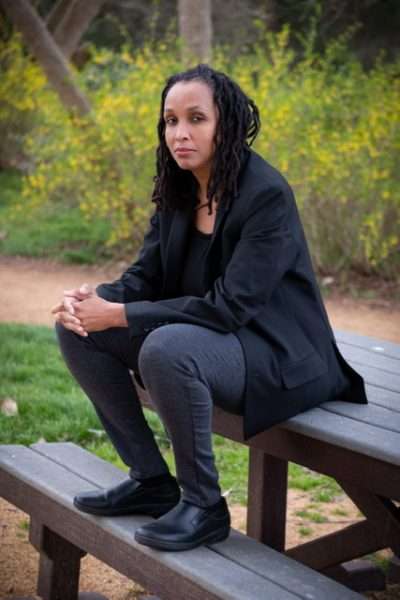 Crystal Simone Smith is an award-winning poet. She founded and serves as the managing editor of Backbone Press. Her haiku has appeared in Frogpond, Modern Haiku, Acorn, The Heron’s Nest, and elsewhere. She is the author Wild Flowers: haiku, senryu, haiga and co-author of One Window’s Light, Unicorn Press. She is currently an Humanities Unbounded Fellow at Duke University.