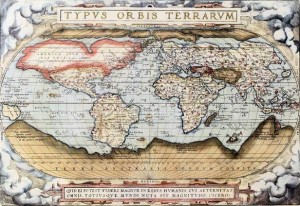 Montage #24, presented by Allan Burns, is now up here on The Haiku Foundation website. This week’s theme is “Around the World” and features the work of Ion Condrescu (Romania), K. Ramesh (India) & Bob Lucky (an American residing in China).

My own favorite from this edition is:

Vedic chants . . .
a heron glides to a rock
in the misty lake

The juxtaposition is strong and the 2nd and 3rd lines lend themselves to both the real and experienced as well as the imagination and inner/consciousness, allowing readers more of an opportunity to make their own connections. The heron appears like some mysterious, mystical apparition that is more than just a bird. The poem is also three-pronged in its reach: through the “Vedic chants” it is able to connection back to the rich history of Indian religion, mythology and philosophy; its English composition into the English reading and speaking world and its own haiku tradition; and its haiku form, which reaches back and connects to Japanese haiku literature, thus expanding the web and its possibilities. It also reminds me of the haiku work Octavio Paz wrote and the way in which he connected haiku and Indian religion in his solo renga/poem El Día en Udaipur (A Day in the City of Lakes) [see Modern Haiku 36.1].

What are some of your favorites from this installment of Montage and why?