Alan Summers lives in the United Kingdom and is President of the United Haiku and Tanka Society, a Pushcart Prize nominated poet and editor of the recently launched Blo͞o Outlier Journal. In 2012, Alan gave a TEDx Talk, Amazement of the ordinary- life through a haiku lens and he is featured in the NHK TV of Japan documentary Alan’s Haiku Journey. In a 2019 interview in Haiku Commentary, he shares his “discovery” of haiku.

“I was in the Queensland State Library, which has a huge collection of Asian literature, and I must have slipped a copy or two of something amongst all the ‘Western’ forms of poetry. When I opened the next book from a huge pile (I was a fast reader) it was short poems, and they started to click with me, and I saw they were called haiku. Within half a minute, I realised I would stay with haiku for years to come. I stopped trying to accomplish and conquer poetry, and just enjoyed it for its own sake.” 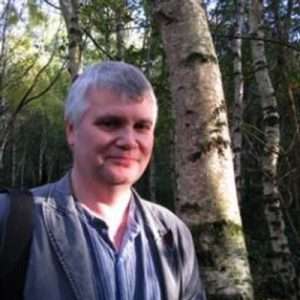 Additional examples of Alan’s poetry and writing can be found on Call of the Page and Area 17.

The Haiku Foundation Digital Library contains Alan’s 2020 book, Forbidden Syllables, and samples from the book include:

a pot of coffee the sparrows zing by writing

a click and clank the kitchen awake and demanding

Two articles on The Haiku Foundation website that feature Alan’s poetry and observations include:

Thanks for reading,
Dan Campbell