Haiga are among of the most delightful offshoots of haiku, and it turns out that almost all of the great Japanese masters would occasionally add a drawing or sketch to their poems. Some haijin like Yosa Buson (1715 – 1783), were extraordinary painters, ranking among the finest in Japanese history. Others, like Kobayashi Issa (1763 – 1827), could barely paint at all, and yet his modest images can evoke as much feeling as the skillful haiga of Buson. It has been the personal feeling of the poet-artist that has counted the most, and the combination of haiku, calligraphy, and painting by a master using the same brushes, ink and paper unifies the different forms of artistic expression.

In the western world, haiga has lagged behind the broad acceptance of haiku, but over the past few decades more and more poets are adding visual images to their words. Unlike in Japan, however, instead of everything coming directly from the poet-artist, photographic and/or computer images are common, creating less personal feeling than most Japanese works.

Nevertheless, the selections for Juxta 5 show haiga by fine women poet-artists with a great range of observation and imagination. This demonstrates growing interest and increasing creativity in this multifaceted form of visual-verbal expression. Each of the following artist-poets has also been chosen for the Gallery of the Haiku Foundation, where you will find further examples of their work.

All but one of the poem-paintings in this issue were published during the past 15 years, but an evocative haiga by Ann Atwood was created several generations earlier. She was known for her photo books, and many of her images could stand alone as fine photographs, but one in particular is more tantalizing in its combination of words and image. 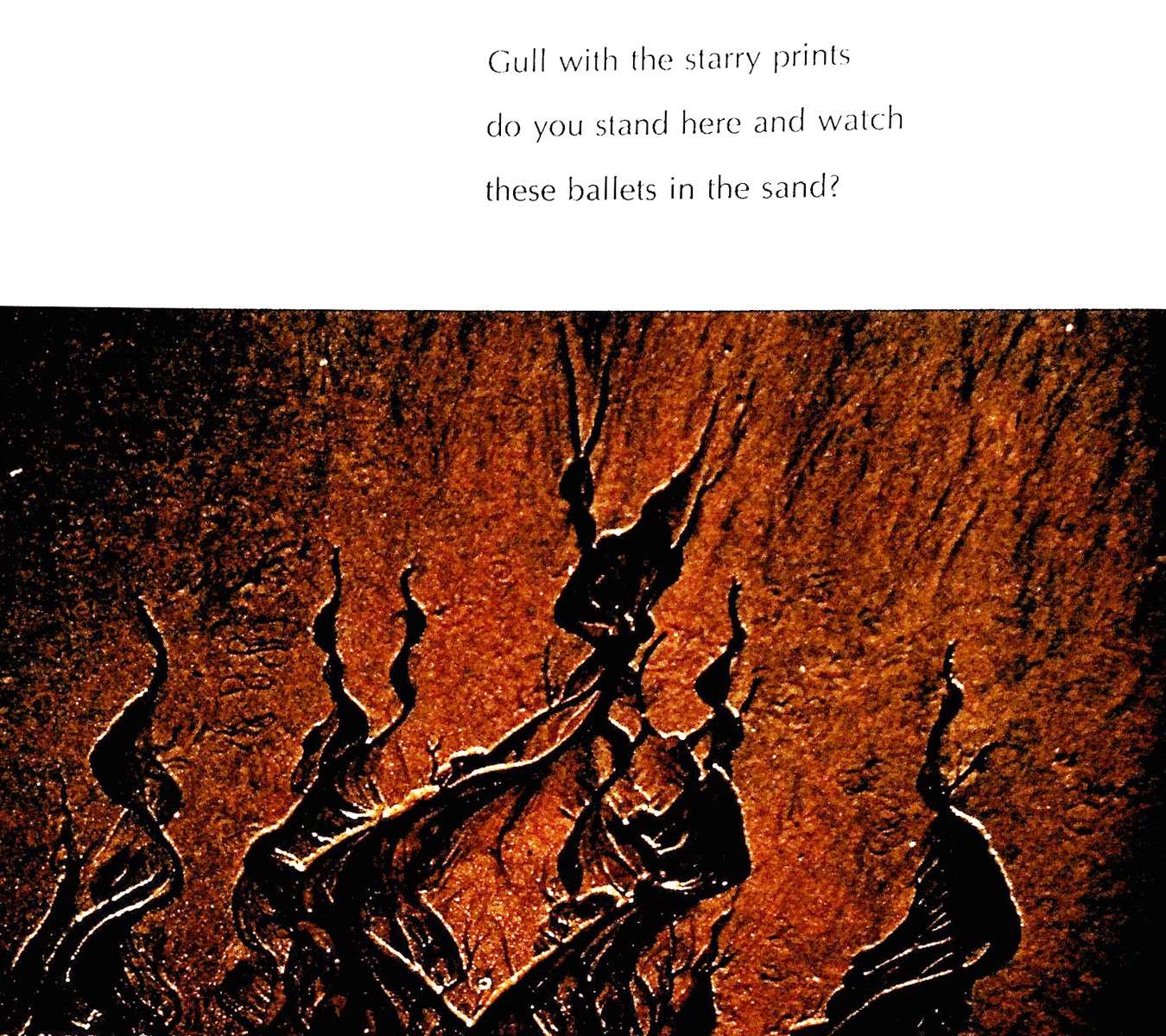 One feature of this poem is that instead of 5-7-5 syllables, it has 6-6-6, suggesting more of an evenly-patterned feeling than most haiku. Similarly, the image is primarily symmetrical, with a tall form in the center, and of 3 and 2 smaller forms to the sides. In Japan, the image would probably have been given more empty space to one side or the other, but here the irregularity of the forms give the work its own sense of life.

Moving 33 years forward in time, a haiga by Pamela A. Babusci from 2004 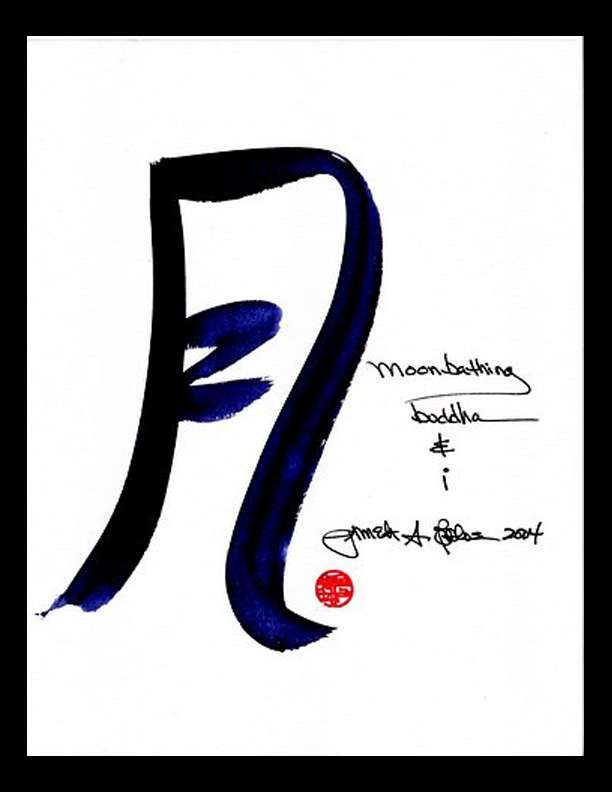 utilizes the Sino-Japanese character for “moon,” originally a picture of the crescent moon but later “somewhat squared off (月). In this haiga, the main image is both writing and painting; the bending of the vertical in the middle of the composition nicely creates space for the poem, signature, date, and a round seal. We can note the important role this touch of red plays in terms of shape, placement, and color.

Marlene Mountain was one of the most active, innovative, lively, and sometimes controversial poets of her time. Her haiga were featured in Juxta 4, where some of her wide range of styles and techniques were shown. 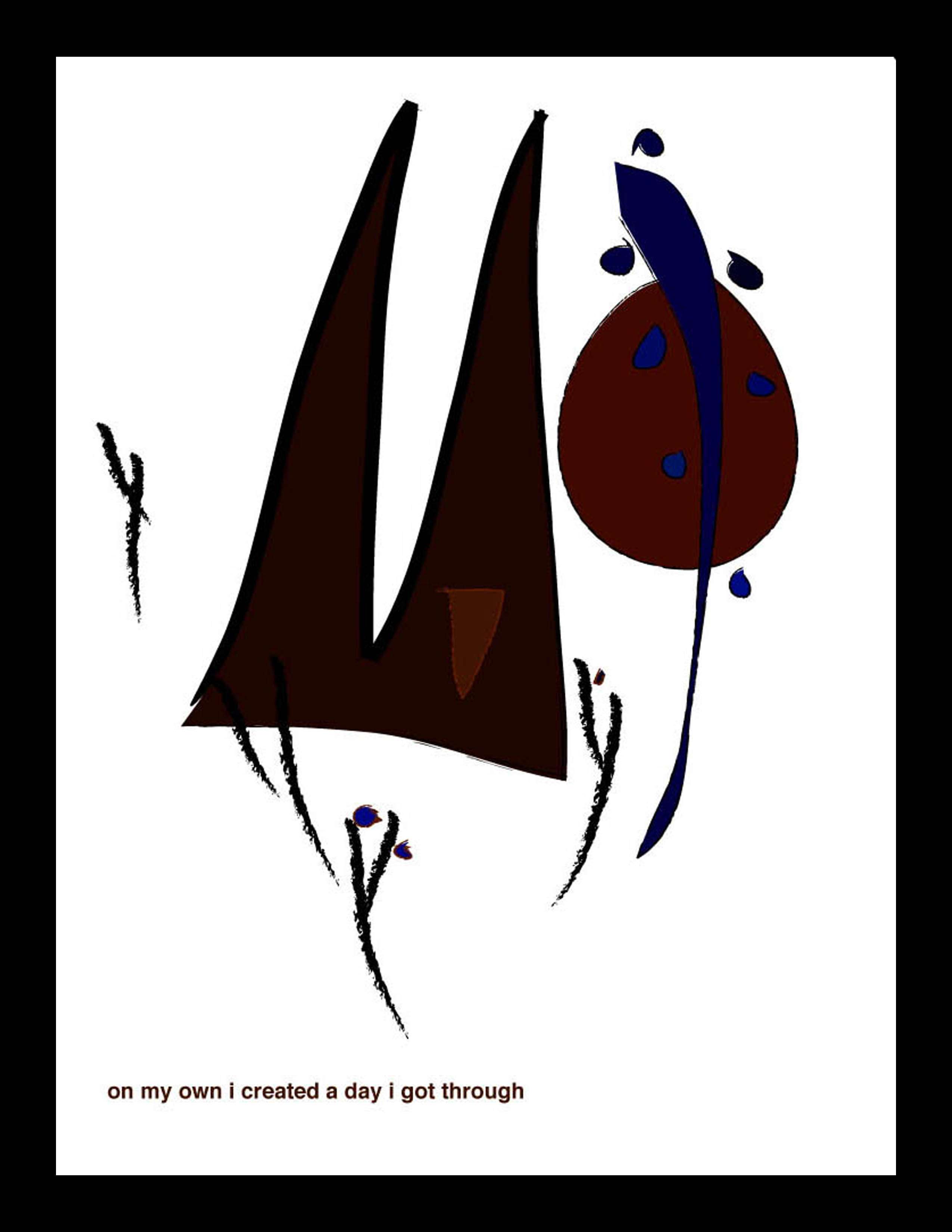 Here a black-and-white computer graphic image from 2005 adds a further range of feeling to her haiku.

Utilizing her expertise in silver-plate etchings with chine collé, Ellen Peckham has been able to create haiga with a depth of visual expression. 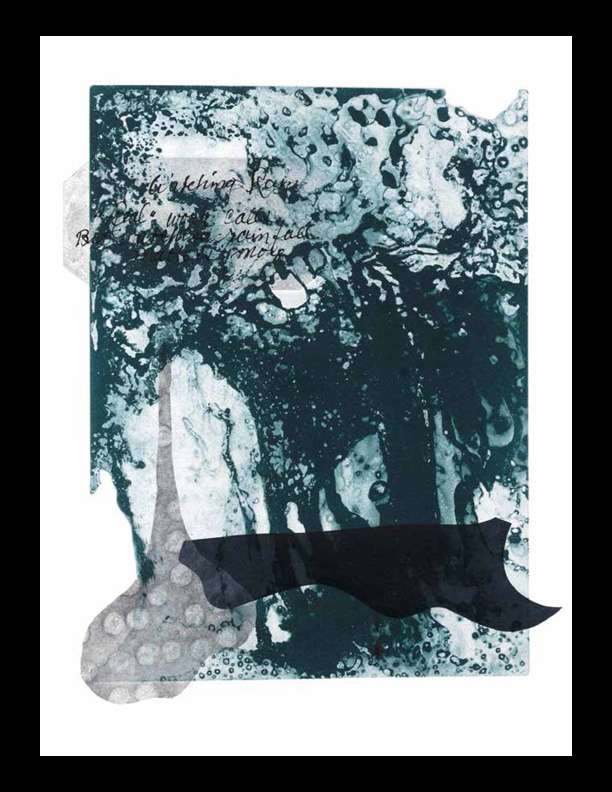 The use of one’s own calligraphy is a feature of the haiga of Beth McFarland. In her case, the large size of the writing gives it at least equal visual importance with the haiku, as in this work from 2012: 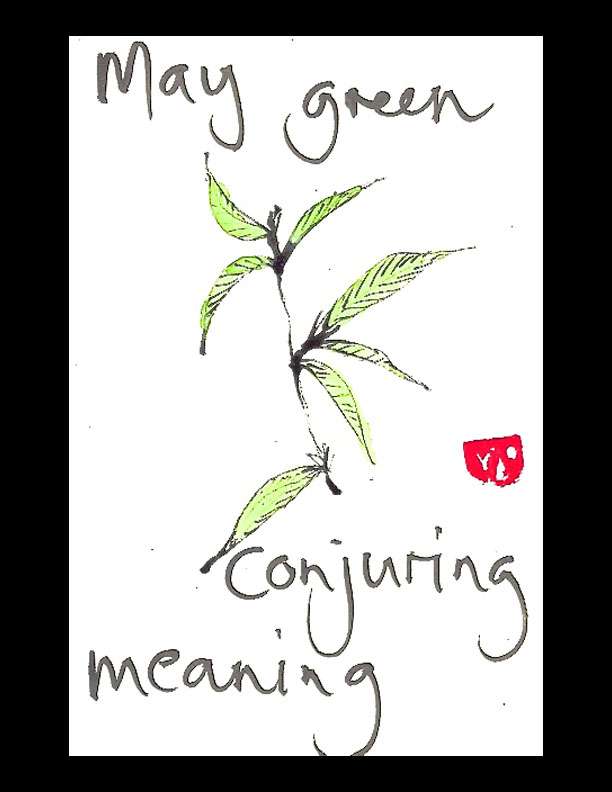 This laconic poem in lines of 2-3-2, is buttressed by the word “conjuring,” with all of its magical overtones. Visually, the seven leaves echo the seven syllables of the haiku, while a red seal helps to punctuate the total composition. The painting might be considered too slight without the poem, and the poem too theoretical without the painting, but here, the words and image are truly equal partners.

Among a number of haiku poets who use digitally altered photography for many of their haiga (perhaps better called photo haiku), Diane Mayr shows a good deal of variety in her subject-matter, among which living creatures are frequent. One of the most interesting has a rooster with a bright red caruncle. 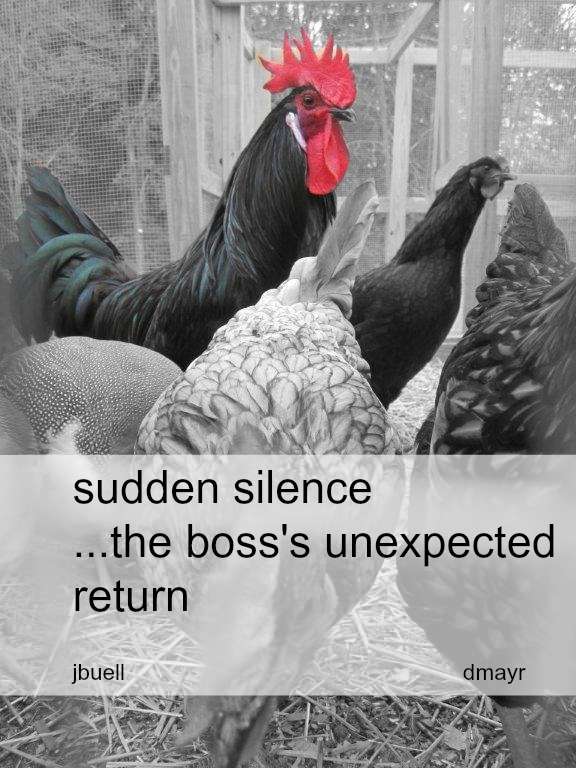 The poem might at first seem unexpected, but makes a nice comparative connection. Watching a rooster prance around a yard, his pomposity can indeed suggest a boss; or at least a creature who would like to be seen as a boss.

With her expertise in ink-painting, Lidia Rozmus is able to create a open-ended cage easily, with one central space filled in — but what is this? 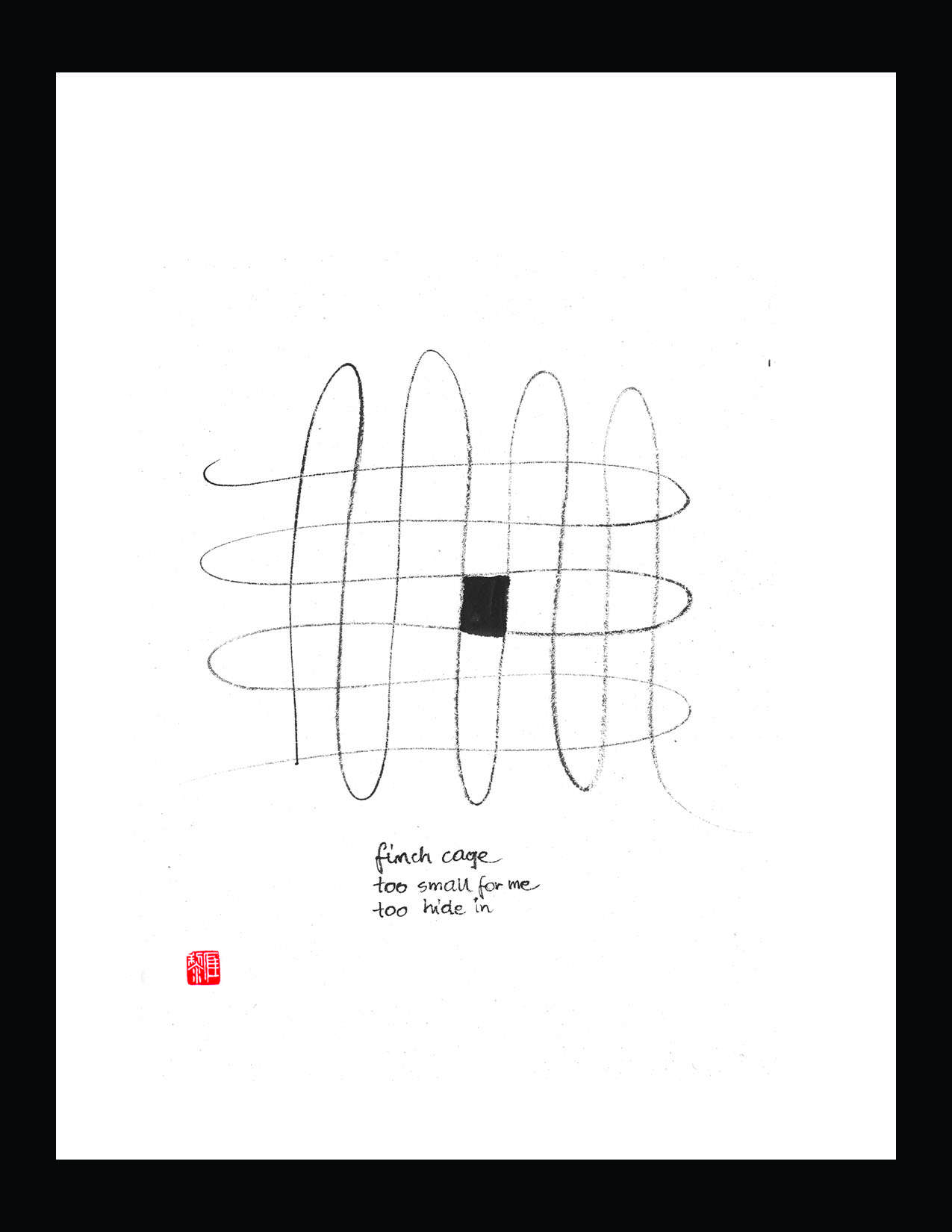 A finch? A birdhouse? An abstraction that suggests closure or safety? Or is it the poet herself, trying to hide in the middle of her art, despite its small size?

Utilizing digital elements to help transform both her watercolors and her digital elements, Debbie Strange is able to create a number of focused images, many from everyday life. 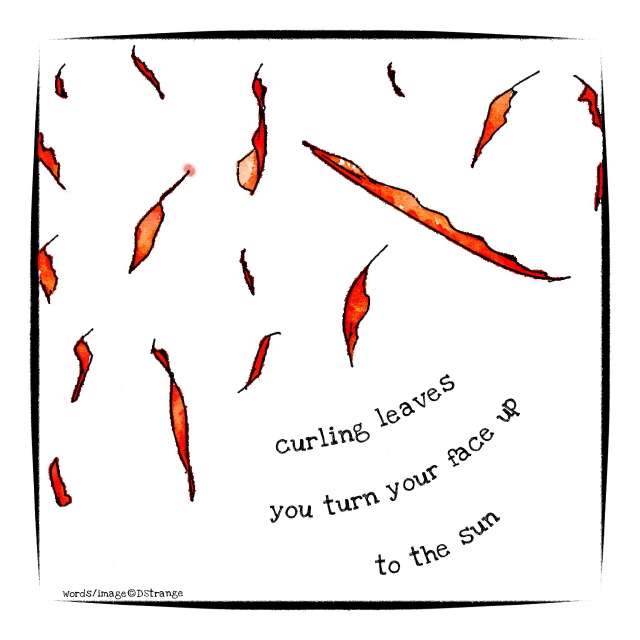 Some of her ink paintings are minimal but cogent, while her digital images tend to be more complex. In either case, there are always free areas that give the poems their own space while helping to completing meaningful visual structures.

One of the significant features of 20th century art is the development of the collage — which is used in poetry and music as well. Collage allows for elements of life from a certain time and place to maintain their original connotations while becoming part of a larger and more complex image. Here adding a feather to paper collage, Jean LeBlanc strengthens the dual role that objects added to a painting can provide, along with a generous serving of ambiguity. 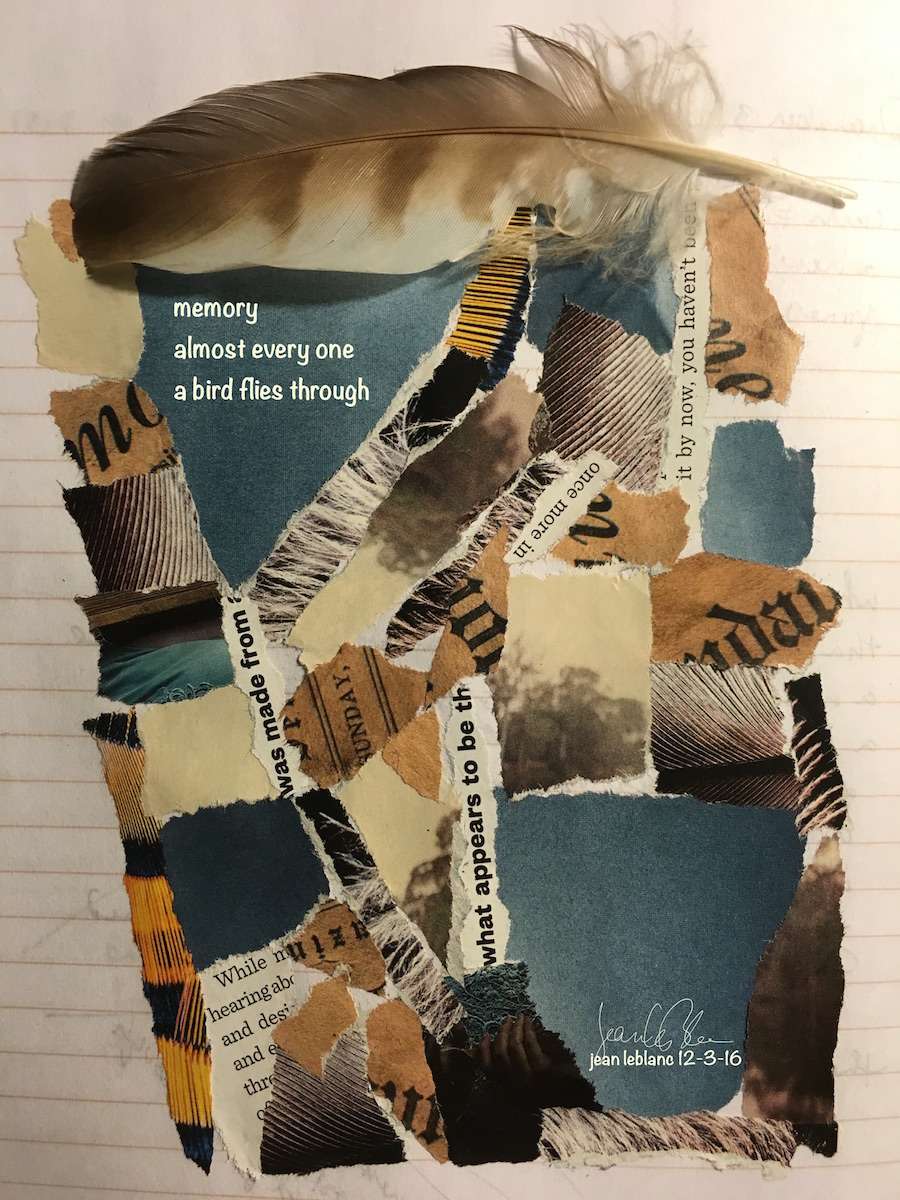 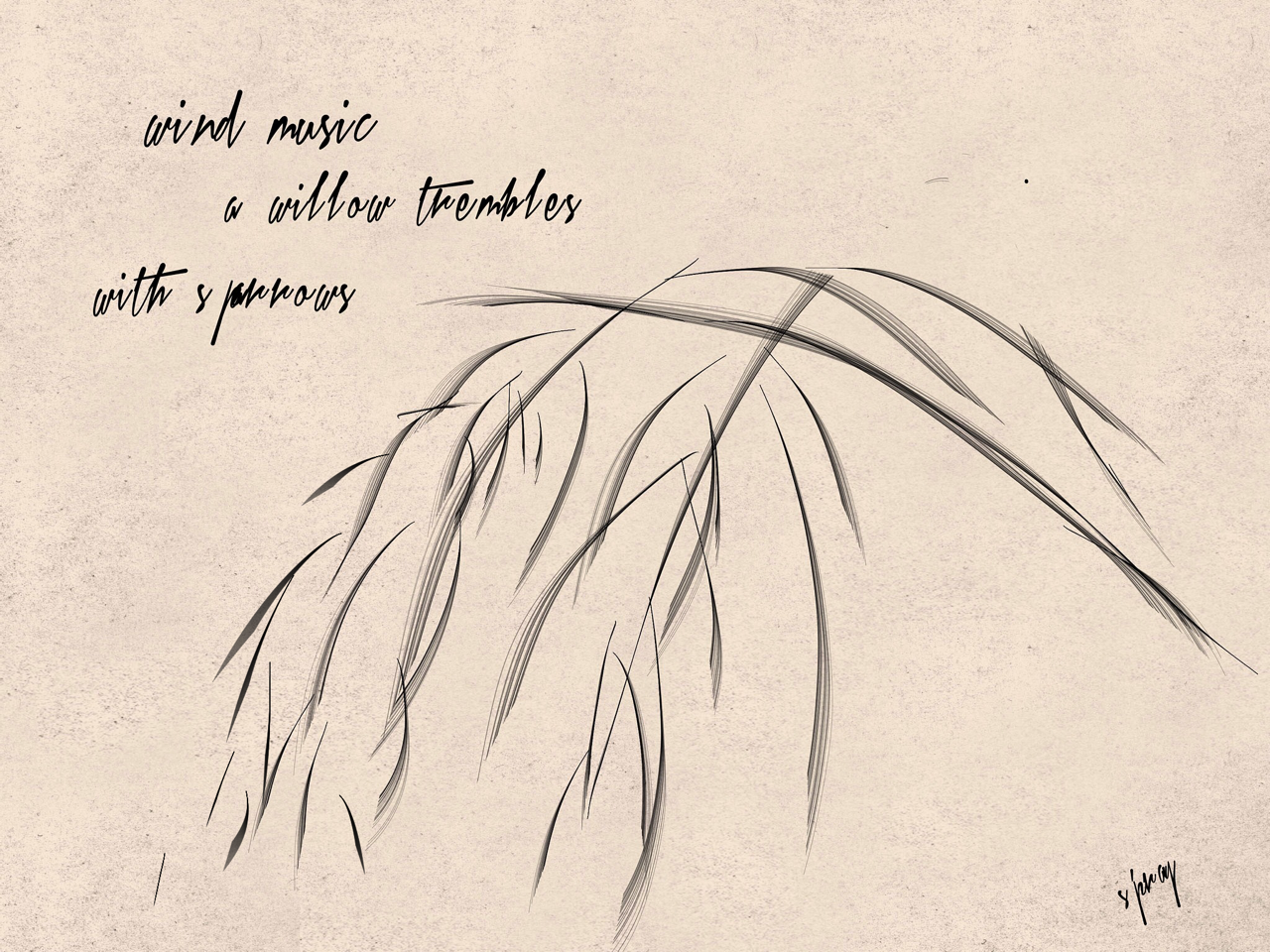 In one of her most informal works a bending branch of willow leaves is leaning towards and then past her poem. This work is a good example of what at first seems to be simple in fact having several layers of meaning. Even the way the poem is spaced allows us to see how there is a strong unity among poem, calligraphy, and visual image, so that in fact they become a single image.

Coming to much of Japanese culture originally via manga and anime, the Polish poet-artist Maria Tomczak has now delved deeply into haiku and haiga. She now serves as editor of the haiku journal Wild Plum, for which she has also created several cover images. 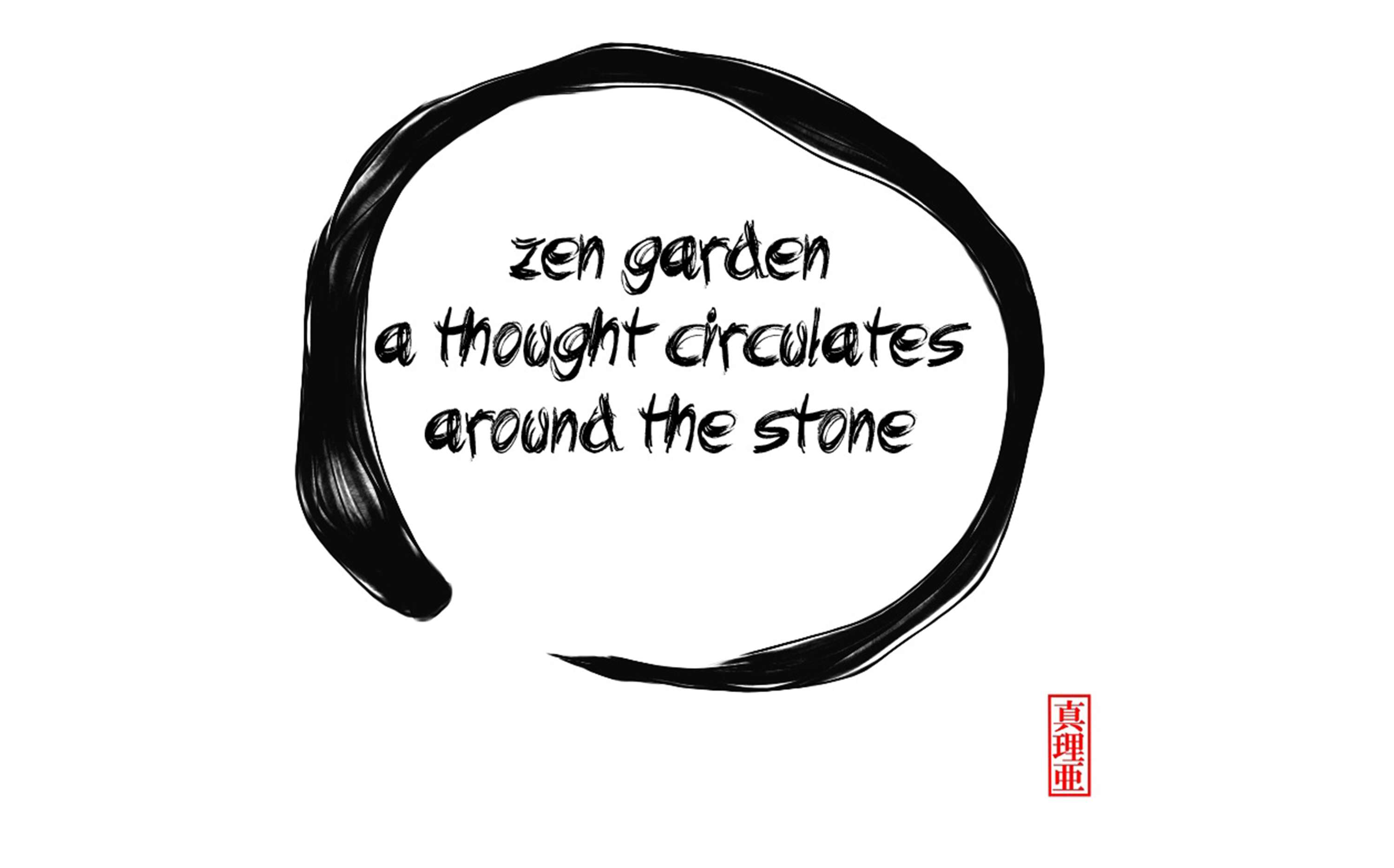 Like a Zen koan (meditation subject), the words are deceptively straightforward — but if the poet is meditating, is having the thought positive, or a distraction? Since it is circulating, what happens when the circle ends without meeting itself?

Among the variety of haiga created by Carole Timmer, a strongly composed photo haiku is created by opposing diagonals, always a way to give a sense of movement to any image. 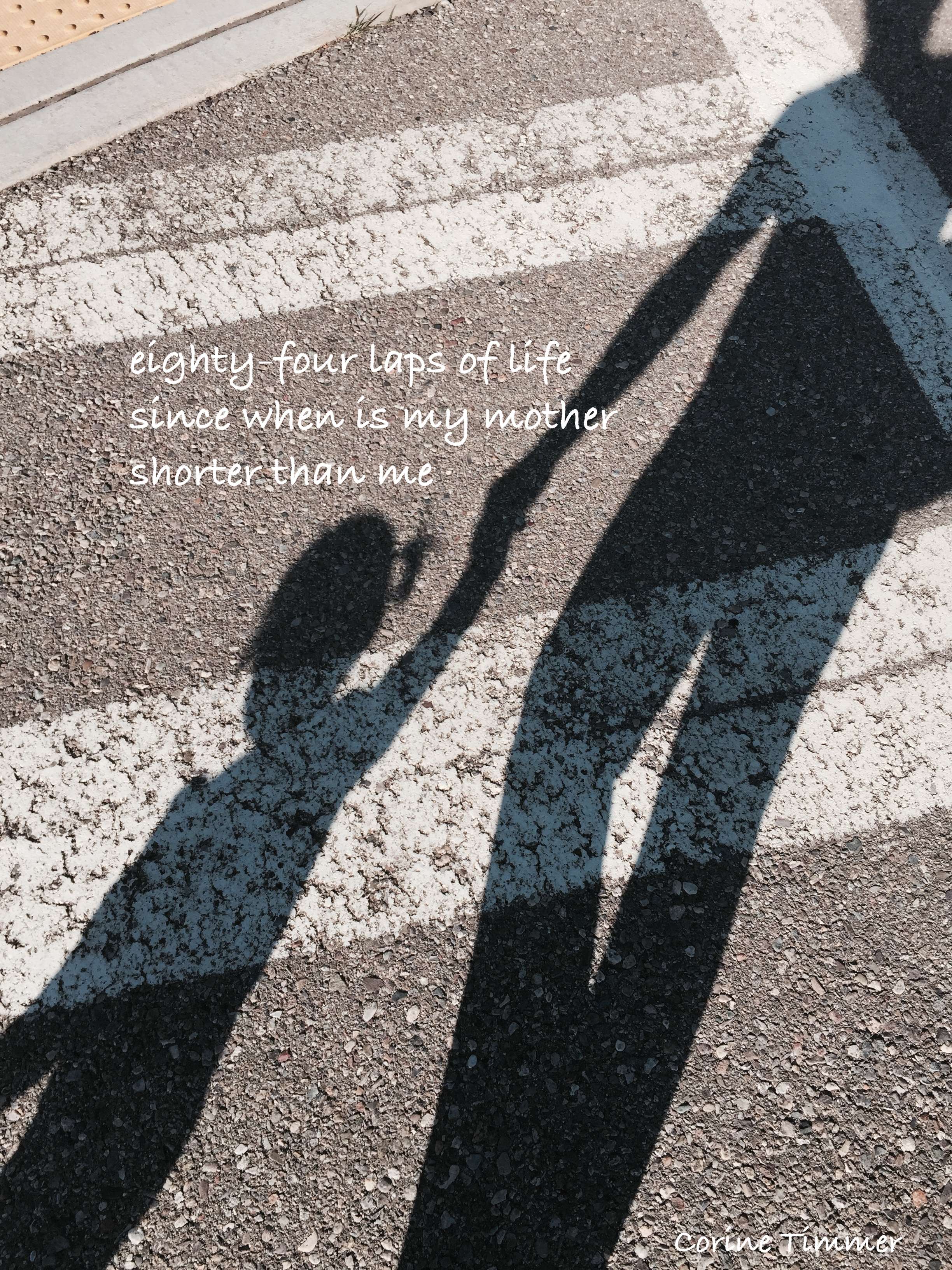 The poem offers further potentials for meaning. Of the two figures seen here, is one the “mother,” and the other the “me”? Or does it suggest vice-versa? In this image, the importance of the holding hands is created by the cropping of the photograph; nothing more needs to be said.