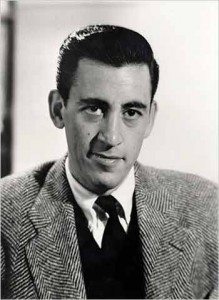 The little girl on the plane
Who turned her doll’s head around
To look at me.

The above poem was written by J.D. Salinger for his second-most-famous-character, Seymour Glass, who, we are told by his brother, Buddy, in Seymour—An Introduction (pp 126-7), “probably loved the classical Japanese three-line, seventeen syllable haiku as he loved no other form of poetry, and that he himself wrote—bled—haiku (almost always in English, but sometimes . . . in Japanese, German, or Italian).”

And so, one of the most intriguing characters in English literature, created by one of our best 20th century writers and stylists, is none other than a haiku poet, and a haiku bleeder. Making Salinger—no?—a downright haiku nut.

The poem was originally composed in Japanese (as readers learn in “Seymour—An Introduction” p134), on the day he committed suicide (see “A Perfect Day for Bananafish,” one of Salinger’s Nine Stories), and was lovingly translated into English by none other than Buddy. The poem first appeared in Salinger’s novella, “Zooey”, published in the May 1957 issue of The New Yorker, and, in 1961, was published with “Franny” to create the double martini that is Franny and Zooey.

The poem’s focus is not the airplane, the doll, the doll’s head, or even the poet/character, but the little girl; the child. Even more so, the mind/spirit/soul of a child and what they represent: innocence, purity, emptiness, the ego-less. A kind of spiritual perfection, ultimate enlightenment and beauty—all the things they can teach us and show us, reminding us of what we once were and, perhaps, what we could be. Only to remind us, however, that to achieve this is virtually impossible.

Unable to achieve this god-like (Buddha-like, Jesus-like) state of consciousness and being, Seymour (an older, more sophisticated, learned, and complex version of Holden Caulfield?) committed suicide, leaving the above “straight, classical-style haiku” behind, written in pencil, “on the desk blotter in his hotel room.”

It seems Salinger’s themes and concerns only continued from Catcher in the Rye, blooming from a field, holding in much, into a family made of glass. Haiku, it seems, presented Salinger with a kind of key, and enabled him to take his art to a whole other level.

What do you think?