The HaikuLife Haiku Film Festival 2019 screened 17 new videos. They are available permanently in our video archives, and will be featured individually on the blog in the coming days.

The EarthRise Rolling Haiku Collaboration produced another outstanding showing, with poets from around the world contributing to the world’s largest collaborative poem. This year’s theme, in the United Nation’s Year of Indigenous Languages, featured a seed poem by British scholar W. G. Aston, possibly the first haiku ever written in English. A complete version will be made available shortly and announced on the blog.

Here are the reports we’ve received from IHPD local gatherings:

Nine poets had gathered around a long table in the midst of the hubbub. They had travelled from all over the city to mark and celebrate International Haiku Poetry Day for 2019 at Paperbark Haiku’s invitation. It was the largest turn out of Paperbark Haiku WA (formerly Mari Warabiny), membership in recent memory for a ginko. The other attendees besides Maureen Sexton were Rose Van Son, Liz Nicholls, Mimma Harrison, Gary de Piazzi, Coral Carter, Melissa Moffat, Tricia Cole, and Samar Ghose.

The morning had dawned crisp and clear with just enough of an autumn chill in the air to pull on a light jumper—or not. The Perth Cultural precinct with the Art Gallery, Museum, State Theatre Centre, Perth Institute of Contemporary Arts next to the library was abuzz with loitering lots of local and international visitors, clutches of students from the nearby TAFE college, school children on an outing, city office workers between destinations, artists setting up with bits & pieces of their craft, young people in twos and threes, families pushing prams, chasing little kids; all strolling about the sandstone walkways, verdant gardens, art & sculpture displays, pop up food stalls, soaking up the beautiful warm autumn sunshine back-dropped by a middle aged diva’s aria floating in the air. Not far from her a 10-12 year boy was playing the ukulele. Huddled around a guitar on the steps of the Native Wetlands, a Christian choral group was deep in practice.

Inside the First Edition cafe, greetings exchanged, introductions made, coffees ordered, the seven women and two men pulled up their chairs and got down to the business at hand: haiku. Maureen opened the session with a brief talk about the International Haiku Poetry Day and then handed out copies of The Truth about Haiku by Myron Lysenko. There was discussion about the guidelines of writing haiku and whether haiku written in English was really haiku, or whether it should be called something else. The question was also asked “Is it cultural misappropriation?” It was generally agreed that English language haiku is haiku, so long as it follows the general essence of what haiku is and contains the basic elements of haiku.

Next, a few haiku and their accompanying commentary from Patricia Donegan’s excellent book Haiku Mind, were chosen and read out in appreciation of the singular moments in our busy lives that can allow us to discover the meditative simplicity of the here and now, “a profound way of seeing our everyday world. . .living our lives with the awareness of the moment expressed in haiku”.

after the riot –
such a perfect
moonlit night

first cricket –
the pulse
in my right wrist

evening light –
a loaf of bread
on the cutting board

The group then dispersed outdoors for a short ginko to observe, note and even compose haiku, inspired by the natural and the created surrounds of the precinct. Many haiku were written, observations made and some of these were workshopped by the group as they were read out by each poet.

It was a wonderful few hours of creativity and bonhomie between like-minded people enjoying each other’s company and the celebration & cultivation of that unique of all poetry forms: haiku.

Door prizes (all featuring poems by kjmunro) included: a small box of haiku chocolates (with poems from contractions); a League of Canadian Poets postcard from “Poem in Your Pocket Day 2019” featuring her poem ‘low winter sun’; a keychain featuring her ‘riding my bike’; a Baked coffee mug from 2009, featuring her ‘Yukon fireweed’.

You can read an article about her work in What’s Up Yukon, and/or listen to an interview of her on CBC radio.

And here are a few images from the event, all taken by Jo Lilley: 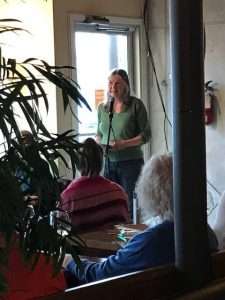 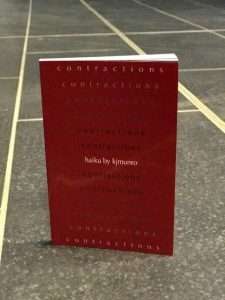 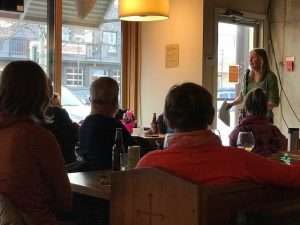 We’ll add others in this space as they become available.

And the winners of the Touchstone Awards for 2018 were announced. Each recipient will be honored with an individual blog post in the next few days, featuring their winning effort — poem or book — and commentary by their respective committees.

We hope you spent time with haiku on International Haiku Poetry Day, and if you did, we know it treated you well.