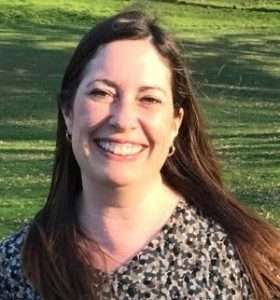 HAIKU BRIDGES is pleased to interview Julie Schwerin from Wisconsin as part of our “Haiku Bridge Builder” series, profiling the pioneering initiatives of individuals or groups who are bringing haiku and its related arts to new audiences around the world. Julie has been a trailblazer on numerous fronts, especially in establishing outdoor haiku installations in her native Midwest.

You’ve been instrumental in establishing several haiku installations in the Midwest in recent years. Can you describe what led you to these initiatives?

The wonderful thing about an audience of other haiku poets is that one doesn’t really need to explain the hold these little poems can have on one’s life. We all have our stories. Mine began as a way to work through the grief of a cancer diagnosis for myself and later the death of my mother. Haiku helped me make sense of the world by focusing on the everyday, the simple, the present moment. When I began to explore all things haiku and read about the haiku stones in Japan called kuhi, I dreamed about creating something similar nearby. I started looking for places where haiku could be included into the landscape.

Most of the trails I hiked had benches spaced along them. Some of the benches had donor names engraved or attached. Maybe benches were a place to include haiku. I really liked the longevity and durability of stones though. So it was an idea I carried with me and allowed to marinate in my imagination. In 2015, as the newly elected Midwest Regional Coordinator of the Haiku Society of America, I was tasked with hosting a quarterly meeting for the group. I knew exactly where I wanted it held: The Inn at Honey Run, a charming boutique inn in the heart of Amish Country surrounded by woods. It was a place I experienced serenity to meditate and write.  I knew it would be the perfect place for a writing retreat. The day I called to check availability and rates at the Inn, the owner, Jason Nies, answered the phone. We couldn’t find any openings in the fall when the conference was to be held, but Jason wanted to know more about this “haiku thing”. He later told me that he heard a passion in my voice. Then he shared an idea of his own. He had always wanted to create an outdoor art museum on the grounds of the Inn.  That led me to share my idea for a haiku path of kuhi. The rest is history. We worked together to create a 1.4 mile path through the woods and secure 30 large stones from a neighboring farm. I ran a contest of Midwest writers for the 30 seasonal poems and had the haiku engraved on aluminum plaques that we affixed to the stones. And on September 17, 2015 the grand opening of the Forest Haiku Walk was held with poets, friends, guests of the Inn, and local media in attendance. This also marked the first installation of what is now the Holmes County Open Air Art Museum in Millersburg, Ohio. 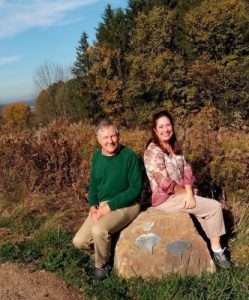 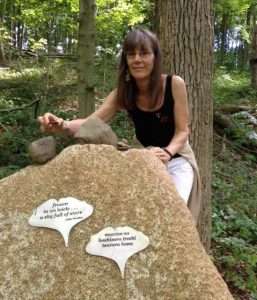 I’ve had the chance to walk the path on numerous occasions. Sometimes with other poets and other times with folks who have only a slight idea of what haiku is. Each time, I see the wonder that is experienced as one encounters another stone and pauses to read the poem then stops to have a conversation about it or walks on with the image in their mind that keeps resonating. It’s magical. I know that anyone who hikes this wooded path already knows the healing and calming influence of nature, so to be able to include poetry to heighten that experience is pure joy.

What were the biggest challenges you faced in the course of these projects? How were you able to deal with them?

Well, now that we had a successful and permanent haiku path at the Inn at Honey Run, I started looking for new locations for possible paths. I worked with a state poetry group which hoped to place a path at an arboretum, but the project got bogged down in the fundraising stage. I approached the Holden Arboretum in Kirtland, Ohio where I had been a member years before when I lived in the area. I had meetings with the Educational Coordinator, but this project also got sidelined due to budget constraints when the proposal reached the board level. I understood and contacted them each year around budget talks in hopes of keeping the project visible and to remind them of its merit. After two years, my email was answered by Eva Rodriquez who had been an intern in the room at the time of my original proposal but who was now an Interpretive Specialist at the Arboretum. She proposed a different approach to the haiku path that would work within their budget parameters. The Arboretum already had a Guide by Cell program in place. Guide by Cell allows visitors to the Arboretum’s gardens and collections to scan QR codes on strategically placed signs to obtain videos, audio clips, useful resources and now . . . poetry! Fifteen signs were created with a Seasons of Haiku Logo and a unique QR code and placed along their woodland path. Since the Arboretum already had the Guide by Cell program and a regular sign budget, creating the path didn’t require any additional funding. And due to the digital nature of the path, the haiku could easily be changed for each season without having to make new signs. Each QR code was simply linked to a new haiku.

When I approached the Chicago Botanic Garden the following year about incorporating haiku, they had signs they regularly created in-house and thought haiku would be perfect for the size and construction of the signs. We placed haiku in five different gardens throughout the grounds where they remained for a yearlong installation. Unfortunately the year they were to be displayed was 2020 and the Garden closed due to the pandemic. The whole project was postponed until 2021 instead, but then resumed as planned. 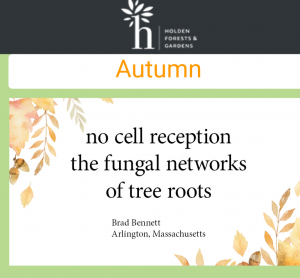 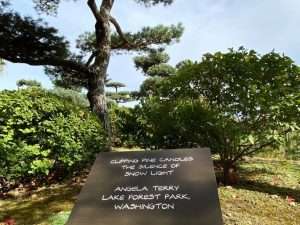 Sometimes opportunities came knocking on my door with almost no effort on my part at all. My local library had a StoryWalk installation in the city park and I was asked to include haiku in the 16 frames during National Poetry Month – April 2017. To add visual interest, high school art students created illustrations for my haiku. Any time more folks can be involved in the process, the better. The whole project evolved from a single conversation and came to fruition in about two weeks’ time with virtually no cost.

So I guess the lessons I learned were to be persistent, remain flexible and be open to opportunities when they arise. When I listened to the needs and resources of the sites I was working with, we could come up with a plan that worked within their budget parameters. And when a pandemic (or other snag) hits, be ready to take a deep breath and wait patiently.

What did you find most satisfying about these experiences, and why?

These projects have been a joy! I love sharing haiku especially with those who may not have exposure to haiku in traditional ways. Maybe they will never pick up a haiku journal, but almost everyone will stop to read three lines. It’s fun to see their surprise that three lines can spark their imagination the way that they do. It’s going right to the source of the haiku moment. It is very likely that while the poem is being read that the sights and sounds and smells are very similar to what the poet experienced when she wrote the poem and the reader gets to step right into that moment!

Not only do these paths bring further awareness to haiku, but they offer opportunities for haiku poets to showcase their work in unique ways. 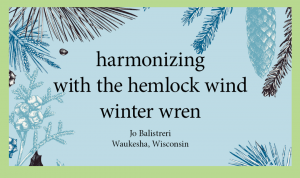 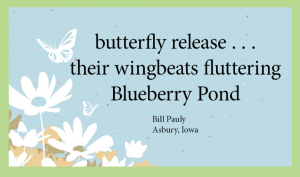 Are there any new haiku outreach projects you’re working on right now? Are there any kinds of help or participation you could use from the haiku community?

I’m currently working with a committee to plan the next Cradle of American Haiku event to be held in Mineral Point, Wisconsin August 5-7, 2022. Mineral Point is known as the cradle or birthplace of the first English-language haiku journal in the United States – American Haiku edited by Jim and Gayle Bull and Don Eulert. For those interested in attending, a schedule and registration is available at  https://www.eventcreate.com/e/haiku. And although I’m no longer living in Ohio, I am part of the organizing committee for the next Haiku North America Conference which will be held in Cincinnati, Ohio in 2023!  So many good things to look forward to!

I don’t have any haiku paths in the works right now, but I would love to work on another one. I’ve moved twice in the last two years, so once I get settled, I will likely reach out to some places nearby to see how we can incorporate haiku. I’ve been very encouraged to see more haiku installations being created. The Golden Triangle Contest in Washington D.C. places hundreds of haiku signs in tree boxes around the Golden Triangle neighborhood each spring. Haiku Poets of the Garden State annually plant haiku signs at the New Jersey State Botanical Garden. Downtown Tucson, Arizona sponsors a Haiku Hike of twenty acrylic haiku signs throughout their downtown each spring. A poetry group in Newton, Massachusetts is placing haiku signs in various public spaces throughout the city this year. These are such great projects that help place haiku in the public eye and hopefully show what contemporary English-language haiku can really be beyond a three-line poem of 5-7-5 syllables.

What can others do?

These types of projects require coordinators. I like to think of us all as ambassadors of haiku. If you’re interested in working on a project like one of these, I would advise you to think local and work with the connections you already have. Listen and be flexible. Reach out to other haiku poets for support. There is a whole community here willing to help. If you have questions or need help with publicity or judging, just ask. I’d love to lend a hand and I know others would too.

Julie Schwerin‘s haiku collection What Was Here was published in 2015, and she coedited the Red Moon Press anthologies Echoes 2, A New Resonance 11, and A New Resonance 12. She was the founder/facilitator of the Ohaio-ku Study Group and established several Midwest haiku installations. Schwerin is an associate editor at The Heron’s Nest, a member of the Red Moon Anthology editorial team, and member of the organizing committee for Haiku North America 2023. She has resided in Sun Prairie, Wisconsin, since 2021.

HAIKU BRIDGES is a periodic feature from The Haiku Foundation designed to encourage and communicate significant haiku outreach initiatives to new audiences. If you wish to inform us of any such initiative for a possible future post, please contact Scott Mason.