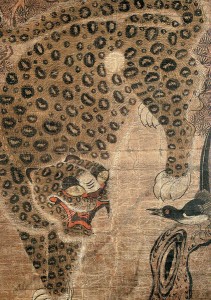 A happy new year and also a happy year of the tiger to you!

Being that it’s the year of the tiger, I thought it might be interesting to present a haiku with one stalking in it:

Natsuishi notes that this poem is “without any seasonal element” and believes it “was inspired by the depths of the author’s consciousness, and there were no links with Japanese feeling. The ‘tiger’ hidden in the Wilds of Mother Nature represents the author’s double.”

In addition, here is something Dimitar Anakiev recently wrote about it:

“The roots of the poem lie in the past, perhaps in the jungles far removed from Japan where many Japanese soldiers were sent to fight during WWII. This poem is in fact a kind of ‘inner landscape,’ examples of which we find in abstract painting but also in the classical music of Bach, Beethoven, Debussy, or Mahler, or in the poetry of Tomas Tranströmer, Juan Ramón Jiménez, and many other explorers of unknown mind” (“Unknown Mind in Haiku: Insights into the Nature of the Creation of Haiku,” Modern Haiku 40.1).

This was the haiku that came to my mind for the new year. What comes to yours?