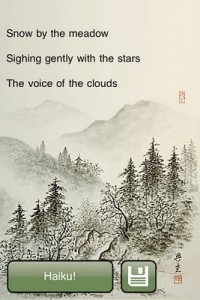 Some haiku news from Jim Kacian:

A young programmer (and Yale student), Luke Bradford, has created a haiku generator application for the iPhone and iPod Touch, called Haiku Time.

He has tried to improve on the somewhat nonsensical haiku created by truly ‘random’ generators (for example, the one at https://www.everypoet.com/haiku/default.htm). To accomplish this, he’s chosen a vocabulary which is meant to fit together seamlessly—lots of nature terms and overt techniques such as personification. Rather than use dictionaries of words he’s composed its vocabulary by hand, testing to ensure that each combination meshes appropriately. In this sense, it’s not so much a random generator as a set of chosen words and phrases, yielding tens of millions of possibilities, but all under the constraints of grammar, syntax, seasonal vocabulary and a specific aesthetic. The results are simple, neither as precise nor as varied as human-written haiku, but still pleasing if not completely original.

Haiku Time is certainly a limited tool but is interesting in the way it experiments with the notion of intentionality in art. Here are some haiku that Haiku Time has generated:

You can see a demonstration video of Haiku Time on YouTube.

The Haiku Foundation will be in conversation with Bradford to discover the possibility of creating a haiku game, for iPhone and possibly larger platforms, though this is in the very earliest stages. We would welcome your input into what you might think would be fun and challenging in a haiku game, and will keep you apprised of our progress.