Like haiku, photography is about seeing and experiencing. Haiku, meditation and photography have much in common: all are based in the present moment, all require complete focus, and all are most successful when the mind is free from distracting thoughts. An image and a haiku are both a ‘moment in time’. Both are viewed objectively yet often experienced subjectively through our own experiences and interpretations. Mood, memory, and/or metaphor all play a part in our writing and in our interpretation of other poets’ writings.

To start off the New Year, I’d like to share some of my favorite photographs in hopes the images will inspire a haiku. This is not a haiga exercise. I’d like you to free yourself up and allow the image to speak to you as to mood, memory, metaphor, either one, two or all three. Reflect on the mood evoked by the image, or the mood you are currently in. Does the image spark a memory? Do you sense an interconnectedness to the image or the object within that might offer a subtle metaphor to deepen your experience or interpretation of the image? There is no need to speak directly to the object or image unless you want to. Let your mind ‘link’ to the image through your own unique sense of connection.

For the sake of this exercise let’s keep to a simplistic meaning of metaphor. “A metaphor is a figure of speech in which the qualities of one thing are carried over to another”. A good example would be Nick Virgilio’s famous haiku, ‘lily out of the water out of itself’ which resonates beyond the image of a lily into a state of being we can relate to. Some have said haiku is metaphor. Let the images speak to your world and your associations.

For the month of January, each poet may send one or two haiku/senryu on the week’s image. Please submit your poems by clicking here:  Contact Form. Please put Haiku Dialogue in the Subject box.

There will be a selection process in which I will briefly comment on a few of the selected pieces.

The haiku appear in the order in which we receive them. 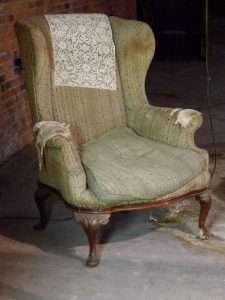 The current city of Seattle resides atop an underground city that can be explored. This chair spoke to me. I hope it speaks to you. Years of sitting are reflected in the worn arms, the stained fabric, the compressed cushions. Can you relate to this image in a way that reflects your own life? Perhaps there is a piece of furniture or an antique in your personal history that means a lot to you.

Below is my commentary for Photo Two: 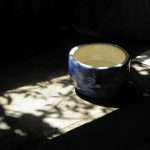 Haiku Dialogue received another great response to the second photo prompt of a blue cup. It was a real pleasure to read your poems and see how and where your mind went with this prompt. I did receive many poems that were similar so was only able to select a few I felt were the best to include in my long list. By similar, I mean poems that contained the words blue cup and spoke to fullness or emptiness in some way. There were also a lot of light and shadow poems. I realize how tempting it is to write to the image itself. However, I was pleased to see many other poems that went beyond the image of a blue cup to blue tea, blue moon, blue notes, to pottery, to sumi-e and so much more. Please enjoy picking your favorites from the list below.

I choses to highlight the following four poems for their crafting, freshness and use of juxtaposition. The latter is where we discover unspoken associations, allusions, metaphor. It was interesting to see how the image inspired these poems and how the poets made it their own through mood, memory and metaphor.

This was one of my favorites of the cup poems, of which I mentioned there were quite a few. This quote by Matthew M. Cariello says it all to me. “Metaphor is central to all poetry, including haiku. In haiku, metaphors are juxtaposed in a way that reveals previously unarticulated associations. A reader is able to understand these associations via certain innate linguistic processes that all people possess”. Between the distant stories and the here and now of a full cup of solitude, is the space where we discover associations or meaning. For me, I sense contentment in this full cup of solitude, and perhaps this solitude offers time to reflect on distant stories, or perhaps it’s about setting aside those distant stories and appreciate just being in the moment, feeling the fullness of solitude. Others might interpret this differently. I find this an effective juxtaposition that opens this poem up to deeper meaning.

pottery class
giving a new shape
to my dreams

One of the most original of the poems where the poet literally took that blue cup image and reshaped it to reflect their world. Here, the haiku becomes a subtle metaphor for life through the simple act of shaping something out of clay at a pottery class. So much is implied by the last two lines, the sensory feel of one’s hands on cool clay, perhaps even the spin of a potter’s wheel, the newness of the class, the newness of creating, and the deep association of how shaping clay is also shaping, perhaps renewing one’s dreams.

soaking cup
my sorrows fall
to the bottom

What captures me immediately with this poem is the music of the language. The sibilance and the assonance of “soaking/sorrows”. I felt there was a lot to plumb between the first line and the final two lines once I got beyond how great it sounds reading aloud. At first read I felt an association between soaking cup and sorrows falling. It made sense purely on an emotional level. It created a visual I could relate to if I thought of how the image might have inspired the poet. A blue cup, a soaking cup, what is being soaked? Does it allude to soaking our sorrows? This of course would be more subjective than objective. However, the poem deepens further if one views the first line in a more objective way and relates a soaking cup to a medical device/test or even a menstrual device. Then the final two lines suggest or imply one’s emotional reaction to a test or test results.

gone to earth…
the lingering whisper
of family spoons

This is a perfect example of how one can be inspired by an image and take it into their own vault of memories. The silence of a sunlit bowl becomes a memory of family gatherings around a table, perhaps a look back at one’s youth, when parents were still alive. I can visualize a family around the table, spoons scraping against bowls. It’s true that sound and scents often trigger our most heartfelt memories. But for this to happen, one needs to be present, be in the moment, be aware as this poet obviously was simply gazing at an image of a bowl. The juxtaposition pays homage to family members gone to earth, dust to dust, but it offers so much more by suggesting the rituals surrounding our deaths, the gravesite service, the tombstone, flowers on the grave. It’s organic. It’s real. I can’t get that lingering sound out of my own head as it brought back my own childhood. Juxtaposition is everything and the poet has left a beautiful space between the two parts of the haiku for readers to find themselves.

Two excellent essays for those interested in learning more about metaphor in haiku.

Here are the rest of my selections:

a cup and a poem …
what’s left of your passage

blue notes
the cursive
of bamboo

morning shadows
the art of reading
the future in tea leaves

the cup
suddenly empty
his passing

fingerprints
at the crime scene
all that is left of you

blue moon
the time to leave
has come and gone

emptying out
the last of me
spring diaspora

blue planet–
no stars better than
the globe

emptiness
inside as much outside
the bowl

Summer evening –
the rose absorbs the sound
of the bells

all alone
a shred of the moon
in her mug

dear bamboo,
how even your silhouette
supports the fragile

empty bowl –
the weight of shadows
in fragile hands

what we cling to the infinite shades of blue

sundry things
he used to leave around …
still miss him

gone so soon
her empty teabowl
now a shrine

lost in the crowd
the emptiness
in a beggar’s bowl

afternoon meditation
the dust is settling
in an empty bowl

scribbled blue circles …
a baby girl has no more words

leaf shadows
my cup
half full

living rent free
with a garden view
a family of mice

wolf moon
a cacophony all round
the chicken shed

pencil drawing –
the light and the dark
of my memories

yard sale over
an orphaned pot
heavy with change

lone bowl
tracks of an ant
in and out

stolen moments
morning paints me
with a soft brush

the bowl she’d thrown
heavy enough
to kill a man

empty bowl
I rewrite our story
from beginning

abandoned attic –
someone’s destiny left
in the cup of coffee

Guest Editor Carole MacRury resides in Point Roberts, Washington, a unique peninsula and border town that inspires her work. Her poems have won awards and been published worldwide, and her photographs have been featured on the covers of numerous poetry journals and anthologies. She is the author of In the Company of Crows: Haiku and Tanka Between the Tides (Black Cat Press, 2008, 2nd Printing, 2018) and The Tang of Nasturtiums, an award-winning e-chapbook (Snapshot Press, 2012).

Katherine Munro lives in Whitehorse, Yukon Territory, and publishes under the name kjmunro. She is Membership Secretary for Haiku Canada, and her debut poetry collection is contractions (Red Moon Press, 2019).