At times in our lives, fast-moving events of our day-to-day existence may become overwhelming. Between work and family responsibilities, daily needs and doomscrolling, days rush by in a breakneck blur and we sometimes end the week with a sense of ‘where did that go?’ We’re surrounded by the wonders of our shared universe. Maybe it’s time to become immersed in the enjoyment of one aspect of this spectacular world which amazes, delights and refreshes us. We can marvel at the night sky or clouds by day, cheer a ladybug as it climbs a twig and opens its wings, dangle our feet in a cool river, rest in a tree’s benevolent shade, stroke velvety green moss, smell ozone freshness at the coast, crunch through frosty grass, listen to morning birdsong, taste a last autumn apple. Small pauses in quotidian life may be devoted to living slower, using every sense, and sharing our pleasure through poetry. Simple gifts.

Each week for the next few weeks there will be a photographic prompt on the theme of ‘Finding peace and contemplation. . .’ with images capturing moments when we might seek inspiration if the going gets tough. I look forward to reading your personal response to the moments you’ve discovered.

next week’s theme: in the great outdoors in a forest 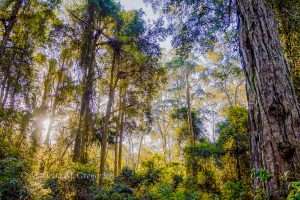 This photograph was taken in old-growth eucalyptus bushland in New South Wales, Australia, before the fires of early 2020. This area fortunately survived the blaze. The Japanese practise of shinrin-yoku, or forest bathing, opens every sense to the forest. Walking or just sitting in the woods is a way not only to feel better, but also to be healthier. Scientists have shown that certain essential oils given off by trees can benefit our immune system. How do you feel among plants, in your garden, in a park, or in the woods? Please enjoy sharing your haiku inspired by the photograph, or by your own forest bathing experiences through the seasons.

Please use the Haiku Dialogue submission form below to enter one or two original unpublished haiku inspired by the week’s theme, and then press Submit to send your entry. (The Submit button will not be available until the Name, Email, and Place of Residence fields are filled in.) With your poem, please include any special formatting requirements & your name as you would like it to appear in the column. A few haiku will be selected for commentary each week. Please note that by submitting, you agree that your work may appear in the column – neither acknowledgment nor acceptance emails will be sent. All communication about the poems that are posted in the column will be added as blog comments.

below is Marietta’s commentary for in the great outdoors among mountains: 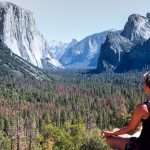 My great gratitude to everyone who sent in haiku inspired by being among mountains. Travelling with you all around the world this week has been a joy, and, as I’ve noted before as guest editor, I love the way haiku, and Haiku Dialogue, bring us together. A number of your poems this week included place names. Esteemed haijin the late David Cobb argued that place names in haiku have their own special resonance. Japanese poets used familiar place names to evoke feelings. They could be places of great beauty, or sites where historic events occurred. Outside of Japan, we have our own iconic places. If we use them in our haiku we can bring them to others. However, sometimes the generic word may be best because it’s more accessible. David Cobb argues it’s ultimately a matter for the poet to decide. You’ll find his essay in The Haiku Foundation’s Digital Library, along with a wealth of other resources on writing haiku, and many downloadable chapbooks by noted haiku poets. https://thehaikufoundation.org/omeka/files/original/9228b7cabb6637a1396da93fe17afbe3.pdf
Please send in up to two haiku next week ‒ I’ll be looking forward to reading your work.

a deep breath
before the climb
sagebrush

This haiku made me take a deep breath, too. The juxtaposition conveys an anticipatory pause before striding upwards, with a sense of what lies ahead. We breathe in the sharp, clean and bracing scent of sagebrush. Simple, but in seven short words hugely evocative of time and place.

mountain breeze
I become
the smell of pines

Another ‛scent’ haiku. It’s been postulated that trees may give off certain aromatic chemicals which act as a form of protective communication, including ethylene gas as a warning. The scent of resin is so deeply associated in our minds with coniferous forests that we can be transported when we sharpen a cedar pencil. Here the poet is enveloped in the pervasive fragrance of trees. Can you become a tree, or its scent? The poet Issa wrote of becoming a dewdrop. Haiku does not always have to be a realistic description of a moment. This haiku to me has the meditative quality of moving into a new reality.

skiddaw
I leave the summit
a little higher

I had to look up Skiddaw. It’s a mountain in the Lake District National Park near Keswick, in Cumbria, Britain. The 6.5 kilometre walk to the summit is described as challenging at first. I read the haiku, perhaps more accurately called a senryu, as a humorous double-entendre. On the one hand, the poet could be exalted by the climb to a superb panorama, and still be enjoying that feeling of uplift while on the descent. On the other hand, the poet could be slyly referring to a particular call of nature that had to be answered on the mountaintop after an arduous climb. Classical haiku poets did not shy away from gritty subjects, or basic needs. It was all a part of the human condition.

Haiku beginners are often warned to avoid metaphor. While overt metaphor may work better in tanka, haiku pundits consider there is room for implied metaphor in writing haiku or senryu. This poem could be read as being about the natural forces that shape mountains and valleys, as in Yosemite National Park. Or it could be a more personal senryu about inexorable changes in the poet’s physical (or spiritual) self. Granite is a hard igneous rock. Before it transforms into shale, it must break down into its component minerals through weathering and erosion. After destruction comes change and transformation into something perhaps not as hard, but resilient, nonetheless.

If I took a deep breath after reading the first poem in the commentary, this haiku made me hold my breath. I’ve not been fortunate enough to see a hummingbird in real life, only in images or video. But this haiku sets me right in the moment when a tiny bird hovers into view. Line 1 helps me picture clear light, poet sitting quietly, a sense of calm. The bird comes as a change in the light itself rather than as a sound. ‛bright silence’ is a beautiful example of synesthesia, where one sense is transformed into another. Very enjoyable haiku.

Nilgiri hills . . .
the echo of purple
in the air

(Kurinji flowers are purple-blue flowers that cover the hills with a sublime purple haze when they bloom. A rarest of the rare sight, which happens once in a blue moon literally! People from all over the world come to Nilgiri Hills to see this phenomenon.)

thin air
on the mountain top . . .
barely hanging on

daily routine
a view of the mountains
on the calendar

climbing the peak—
thousands of years
behind me

out of the wind
everything about this rock
stops

mountain view—
touching the new moon
in my selfie’s reflection

adjacent mountains
I ponder the span
of eternity

between
the mountains
a nameless fragrance

mountain view
the wasp attracted to
my gin and tonic

summer night—
my brother among the stars
and mountains

climbing Mt Fuji
with the sun rising . . .
next lifetime

bluff line trail
the petroglyph hand
of my ancestors

mountain monastery
nothing moves
not even the wind

(The above script is known as meitei mayek, my native script. The language is known as ’meiteilon’. https://en.m.wikipedia.org/wiki/Meitei_language)

mountain hut
I cut a cloud to
patch my roof

what next
the mountain answers
with silence

the depth
of a mountain lake . . .
blue gentian

a little sky
on the mountains . . .
cornflowers

home isolation . . .
a mini monastery
in the mountain’s lap

alpine lookout
beyond the mountains
mountains

cliff edge
with nothing to hold
i grab at the sky

rolling hills
the wobbly sun slips
from this tree to that

spring rain
the rush of water
down the mountainside

moonlight on mountains
a lone wolf howls up
a renegade wind

mountain trail
the prayer beads
she left me

mountain lake
from end to end
the milky way

(Parbat here refers to Nanga Parbat which is one of the highest peaks in Pakistan, 9th in the world.)

on the mountain
the wind is pink too—
cherry blossoms

high above
the shepherd’s call
a squirrel climbs

passing clouds
yet the mountain
stays

mountain picnic
as breathless as
the trees

snow capped peaks
I warm up
to stepdad

moonrise—
inverted in the lake
a mountain

mountain pastures
nomads’ goat-hair tents
in the midst of tulips

(After the snow has gone from Iran’s Elborz Mountains, the sound of tinkling bells heralds the arrival of nomadic families, their goats and fierce dogs up from the plains.)

Dhauladhar ranges…
when the mist unveils
my insignificance

head in the clouds
forgetting the climb
down

mountain trek
under the circling shadow
of a lammergeier

rooted to my spot . . .
the multiple leaps
of limestone karsts

through the mist
over this mountain
a sparrow’s song

winterfest
flakes of cheese fall
on a mountain of pasta

midsummer night
dreams of how the snow tastes
on Fuji-san

Transverse Ranges
exposing their faults—
a lot like mine

(The Transverse Ranges are fault block mountains in Southern California thrust upward by intense seismic stresses. They run east-west unlike other California mountains that run north-south.)

the curvy lines
of a belly dancer . . .
Blue Mountains belt

waterfall hike
the sound rushes us
up the trail

mountain rim
the bright line
between here
and there

nightfall . . .
all my mountains
molehills again

mountain glacier
I still ski down your slopes
in my dreams

skyscraper city
how I always call them
my mountains

Guest editor Marietta McGregor is a fourth-generation Tasmanian who has made her home between Australia’s national capital Canberra and the scenic south coast of New South Wales for over four decades. A lover of the natural world since childhood, she went on to study botany and zoology, and has worked as palynologist, garden designer, science journalist, editor, university tutor, education manager, and grants developer for the national wildlife collection. A photography and travel enthusiast since retiring, she enjoys capturing fine detail of fleeting moments. She came late to haiku, which appealed for its close observation and poetic expression of ephemeral experience. Her haiku, haibun and haiga have been widely published, have won awards and appear in anthologies.