At times in our lives, fast-moving events of our day-to-day existence may become overwhelming. Between work and family responsibilities, daily needs and doomscrolling, days rush by in a breakneck blur and we sometimes end the week with a sense of ‘where did that go?’ We’re surrounded by the wonders of our shared universe. Maybe it’s time to become immersed in the enjoyment of one aspect of this spectacular world which amazes, delights and refreshes us. We can marvel at the night sky or clouds by day, cheer a ladybug as it climbs a twig and opens its wings, dangle our feet in a cool river, rest in a tree’s benevolent shade, stroke velvety green moss, smell ozone freshness at the coast, crunch through frosty grass, listen to morning birdsong, taste a last autumn apple. Small pauses in quotidian life may be devoted to living slower, using every sense, and sharing our pleasure through poetry. Simple gifts.

Each week for the next few weeks there will be a photographic prompt on the theme of ‘Finding peace and contemplation. . .’ with images capturing moments when we might seek inspiration if the going gets tough. I look forward to reading your personal response to the moments you’ve discovered.

next week’s theme: … on a pilgrimage 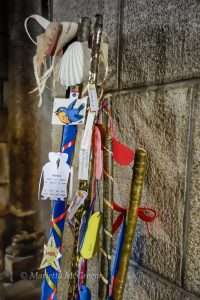 A famous pilgrimage route on the Japanese island of Shikoku is unusual in that it follows a circular path. It includes 88 temples and many other sites believed to be connected with the Buddhist priest Kūkai, from the 9th century. At the railway station in Takamatsu you’ll often see pilgrims ready to set out, with their distinctive white robes, straw hats, and bamboo staffs. Another well-known pilgrimage is the Camino de Santiago, St James’s Way. This route through Spain links with connecting routes from France and Germany. Pilgrims pause at many French cathedrals. I saw these staves, some bearing the scallop shell of Saint James, leaning against the old stones inside a pilgrim church. Scallops are said to symbolise courage, strength and hope. The little bluebird also sends a hopeful message. Why were these helpful hiking sticks left behind, I wonder? Were they forgotten, or had their owners tired of their long journey? Whatever your beliefs, sacred places are fascinating! I’d love to hear your haiku about pilgrimages or meditative walks you may have taken, or thought about.

Please use the Haiku Dialogue submission form below to enter one or two original unpublished haiku inspired by the week’s theme, and then press Submit to send your entry. (The Submit button will not be available until the Name, Email, and Place of Residence fields are filled in.) With your poem, please include any special formatting requirements & your name & residence as you would like it to appear in the column. A few haiku will be selected for commentary each week. Please note that by submitting, you agree that your work may appear in the column – neither acknowledgment nor acceptance emails will be sent. All communication about the poems that are posted in the column will be added as blog comments.

below is Marietta’s commentary for in a cloister: 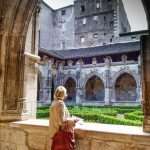 Grateful thanks to everyone who responded to this week’s prompt of a cloister. You found many quiet spots to seek inspiration as well as peace. Your cloisters may have been built in earlier centuries or they may be more modern environments. For some, a grove of trees was a place to seek silence. There were also beautiful haiku about flowers, scents and sounds such as birdsong encountered in cloisters. Even bats featured, but perhaps not as the best bringers of calm and contemplation! I hope you enjoy the selection, and look forward to your comments. Thanks as always to Kathy, Lori and The Haiku Foundation for supporting Haiku Dialogue.

wind whispers
exploring the cloister
of an empty shell

A rather mysterious haiku. Is this a deserted beach at low tide with only a shell to sense the wind? Or has the poet picked up the shell and held it to an ear, hearing the faint echo of wind from the sea? From L1 and L2 we might expect we’re hearing the wind in a built structure, then we find in L3 the cloister is in fact deep in the empty spirals of a volute. The poet could have reversed the lines to read, ‛the empty shell of a cloister’, but I think the poem as written has surprise and hence greater resonance. The ‛wind whispers’, with lovely alliteration, in the poet’s own mind.

Easter Vigil–I slip out seeking
the wild company of lilies

English-language haiku written on two lines are uncommon, although the form is found in renku. Some two-liners may work better if condensed to monoku. This somewhat surreal poem is not in that category. A cut in L1 after the season indicator grounds the haiku in a liturgical setting. The poet’s ‛slipping out’ could be the mental distraction we sometimes experience on solemn occasions, despite our best intentions. Then L3 delivers a surprise – it is not worldly diversions the poet escapes for, but wild lilies. Lilies are associated with Christian tradition as a symbol of hope and new beginnings. They often appear in Renaissance paintings of the Annunciation as a symbol of purity. To join their company implies a metaphoric wish for escape into the beauty of nature. Many readings are packed into this haiku.

mouthing mantras
as a koi rolls gravel
in its mouth

While I cannot claim to be familiar with meditation, as I understand its use a mantra may help to release the mind and maintain focus. Here we’re invited to imagine a mantra as a smooth stone, turned again and again on the tongue, just as a carp mouths a pebble to scrape off every scrap of weed. If we read the haiku as a run-on sentence without a syntactical break into two sections, we see it makes use of simile or explicit comparison to indicate a relationship, which is rare in modern haiku, although Bashō certainly used it in several works. Conversely, we could read the poem a different way – two activities may be happening at the same time. Perhaps the poet meditates by a pond, while a koi rises to the surface, pebble in mouth.

From the carefree pastime of constructing an elaborate sandcastle complete with turrets and archways, as the tide turns we’re wrenched back to the present. No longer just a phenomenon which happens naturally twice a day, the onrush of the sea is a disquieting reminder of increasing floods and inundation many places may suffer as a result of climate change.

medieval cloister—
a wind passes
through the history

vow of silence—
an amazing garden
out of sight

glasshouse days
the growing space
in my head

cathedral cloisters
being the scale for
the artist’s painting

(When I was taking photos at Norwich cathedral, a local artist asked me to pose beneath the tower / spire in order for him to scale his drawing.)

Cloisters of Durham,
the evening caught in my hair,
a darkness, a bat

abbey’s cloister—
the moon is mirrored
in an old well

in the zendo
melting down
my armor

hot weather
across the cloister’s hallway
light and shadows

abbey of Follina
silence filled
from a fountain choir

enough light to read by the white silence of morning

in the pond
in the prison courtyard
a lotus blooms

my aloneness
my true companion
in a cloister

reading a book
in the shade of a tree . . .
my corner of peace

cloister ruin—
the song
of a blackcap

under my favourite tree
sitting with books . . .
reading the fallen leaves

leaving home
the crucifix
at the right of my door

new cracks
in a crumbling cloister
another war

letting go
of every atom
a walk in the woods

in the abbey garden
a rose
against the sky

one of the crowd
searching for Francis and Clare
cellphones chirp

behind the convent walls
her life
in prayer

ancient temple
the peaceful flutter
of a hundred lamps

dew in the cloister garden rosary

jacaranda grove
as if the petals
are forever

vespers
finding peace
inside me

cloistered life
and all its trappings—
brewmeisters

cloister saints . . .
how the stone
upholds this vow of silence

meadow walk
I learn to read
the open sky

tall oaks
pieces of heaven
into the third eye

my favorite chapel—
standing beneath
the redwoods

cloister garden
a crocus pushes up
along the back wall

Ephrata Cloister
we retreat afterwards
to the bed and breakfast

in silence
wandering and wondering
why the bell tolls

cloistered yard . . .
a touch me not flower
not so shy

first sight—
i breathe mountains
of the morning

my bench at the
prairie’s edge
a red-winged trills

chambered nautilus
spiraling ever further
into myself

cradled
in the misty mountains
a hum of chants

pandemic
cloistered in a place
without a cloister

cloistered garden
rows of rosemary lined up
in pots

summer porch
she relaxes
to the wren’s song

spider plant
the corner in the balcony
just for my thoughts

childhood memories
a peek through the forbidden
window cracks

without instruction
I walk a labyrinth
amazed

afternoon silence
in an empty cloister
the scent of linden

rooftop terrace—
the sky and I
our changing moods

guest room
the half moon bright
with silence

The Met Cloisters—
out of place and time
transported

sanctuary . . .
in the old cloister
even the snow changes color

velvet cushions
by the window
where rainbows are

old cloister
a trellis supports
all my sins

in a cloister
the breeze takes me
just me

that cypress
knows my secrets—
corner of shade

In the shadow
of the cloister
a wild red rose

hidden pond—
sharing the stillness
a fallen rose & I

closed garden
a butterfly stitches
the light and the shadow

quietly praying
as I circle the monastery
hooded crow

earbuds and Bach
orchestrating
my escape

pond ripples
the heron and I
both still

mountain chapel
underneath the creek’s babble
echoes of your song

silent retreat
the moon and i
cheating

Guest editor Marietta McGregor is a fourth-generation Tasmanian who has made her home between Australia’s national capital Canberra and the scenic south coast of New South Wales for over four decades. A lover of the natural world since childhood, she went on to study botany and zoology, and has worked as palynologist, garden designer, science journalist, editor, university tutor, education manager, and grants developer for the national wildlife collection. A photography and travel enthusiast since retiring, she enjoys capturing fine detail of fleeting moments. She came late to haiku, which appealed for its close observation and poetic expression of ephemeral experience. Her haiku, haibun and haiga have been widely published, have won awards and appear in anthologies.