HAIKU BRIDGES is pleased to interview Amanda White from South West England as part of our “Haiku Bridge Builder” series, profiling the pioneering initiatives of individuals or groups who are bringing haiku and its related arts to new audiences around the world.  Amanda launched THE DAILY HAIKU as a Facebook group two years ago this month; today it engages more than 13,000 participants.

Please tell us about THE DAILY HAIKU initiative: what led to it and how it has evolved.

As a writer and creative practitioner who has been working in the arts-for-health arena for over fifteen years now I understand the benefits a daily creative activity can bring to our sense of wellbeing. When the Covid-19 pandemic arrived, and here in the UK we went into lockdown in March 2020, I wanted to explore the possibility of creating an online writing community that would use a format and activity that would be accessible, engaging and fun. Haiku was a form I had dabbled with in writing workshops across all age ranges and abilities that had proved really popular, most notably through my workshop “Are You a Leaf or a Tree?”  So with minimal knowledge of this fascinating short poetry form I set up THE DAILY HAIKU and with barely any experience of social media opted to launch it as a Facebook group.

A key element was the addition of offering the option for people to respond to a daily theme not only with words but video, photography or artwork, appealing to visual thinkers too. I wanted to encourage a space that would attract people who had never written before, those returning to writing, as well as experienced writers.

Amazingly that is what we have become. Starting with just one member in rural west Cornwall, we now have 13,000-plus members worldwide, and we are still growing. THE DAILY HAIKU was encouraged, supported and promoted by other organisations, including writing groups and wellbeing organisations which further helped grow our membership — particularly through the invaluable support of Paper Nations, a creative writing incubator.

I think we have been able to foster a nurturing, welcoming, supportive and creative community by making the community co-designers in shaping and running the group. Decisions are made collaboratively using call-out posts and the poll option on Facebook which allows members to add themes and vote on them for daily, weekly, musical, haiga and renga strands. Many of these initiatives have developed from suggestions made directly by members themselves. Interestingly my own personal journey with haiku and its many variations has been ignited by the members: those who already have the wealth of knowledge to share with others and those keen to learn more like myself. This has made the process extremely holistic but crucially engendered a friendly and welcoming way to learn that feels inclusive.

Beyond our daily business we have also offered other ways for members to get involved, including the use of members’ haiku, voice-overs, artwork, video and photography, first featured in the film “Celebrating 100 days of THE DAILY HAIKU” and subsequently the seven short films under the umbrella title “I Even Dream in Haiku” produced by Paper Nations.  Paper Nations also set up a dedicated space for blogs from THE DAILY HAIKU on The Great Margin website, and throughout 2021 we featured interviews with members about their writing experiences which proved very popular—articles on haiku, writing, wellbeing — and offered a space that was outside social media for people to engage. We also took over The Great Margin twitter for a year, reposting themes from the group and also promoting blogs, as well as engaging with other haiku writers and organisations including The Haiku Foundation. Celebrating our global reach and diversity, The Transnational Literature Journal featured a selection of interviews from our members in an article entitled “The Daily Haiku: Where Time Zones Collide”. Working with others continues to be a key aim for THE DAILY HAIKU and we hope to pursue more initiatives as we approach our second anniversary and move into our third year.

On the basis of your personal experience and the feedback you’ve received from others to this initiative, please describe what you think it is about haiku — both as a poetic form and as a practice — that contributes to personal well-being. How can that be nurtured and perhaps amplified?

From early feedback to THE DAILY HAIKU it was clear that people enjoyed the invitation to respond to a theme with a haiku within a wider community setting. The brevity of three lines with a guideline but not a rule of 5,7,5 syllables offered a format that was easy to access, understand and achieve compared to general invitations to write poetry or prose.  As well as being one of our founding members at THE DAILY HAIKU, Jayne Howard, Director of ArtsWell — a wonderful arts for health organization — supported our creative activities and helped us understand the benefits of being able to engage in an activity that is easy to achieve, accessible, can be fitted in to a person’s day for those pressured by time, covers different levels of engagement either by browsing or contributing, whilst also offering longer engagement and something that fosters social connectivity.

When I set up THE DAILY HAIKU the wellbeing aspect was always a key part of its conception. The group often chooses themes such as loneliness, lockdown, depression and grief which inspire haiku but also encourage members to share experiences and support each other. Furthermore, the visual option was cited by many too as a way into writing which gave them confidence to have a go.

In “Is Haiku your Cup of Tea? (An exploration of ‘creative pedagogy’ and its implications for inclusive online writer development)” Professor Bambo Soyinka (Bath Spa University) and I explore ideas around connection and writing in relation to THE DAILY HAIKU [TDH] where I observe that the sense of invitation, as opposed to challenge, was important to create “not just an exciting space but nurturing a safe space where people are relating to each other. Once the connection is there, the content starts to emerge.” Sharing haiku can contribute to our sense of wellbeing: from the beginning when we started to share our haiku it became clear that it was as much about the conversations that emerged as the haiku itself that started to create connections, build relationships and offer opportunities for writer development.  TDH member Penny Lowery writes “I found TDH a lifeline during Lockdown . . . In this group of people who love poetry I also found generosity, compassion, acceptance and inspiration. It didn’t seem to matter whether members were already published poets or beginners — there was something here for everyone. Not to mention the fact that I now have friends who write haiku all over the world!”

TDH Member Amita Paul writes: “The Daily Haiku has emerged in the Covid era as a warm and beautiful place in the virtual world where one can share one’s deepest thoughts and innermost feelings with the confidence that they will be met with sympathy, empathy, and a nurturing response. There is both repose and stimulation, inspiration and catharsis, reality and imagination, life and art to be found here. There is comfort and hope, creativity and companionship in this poetic community.”

I was very keen to foster constructive and helpful criticism so that we avoided any sense of elitism to facilitate all levels of engagement, from those wanting to take haiku seriously to those who wanted to take their first steps into writing. From the outset we developed a broad approach to haiku that offered guidelines not rules to ensure nobody would be put off and that there was room for people to grow as writers within the space — and this is something that has happened which is very wonderful. This feeling of confidence in one’s writing has also contributed to a meaningful sense of wellbeing.

As TDH member Sharon Ferante puts it, “In just a few words, so many worlds.” Haiku has the ability to crystalise observations and feelings. I myself have been surprised by the deep emotions my daily haiku writing practice has stirred, and my confidence to share these offerings within the group has proved very cathartic.

The traditional association with nature has also proved a really key element, particularly during these times of Covid-19 where a walk outside or just a view through a window can bring healing thoughts and perhaps produce a haiku from those observations of the natural world. Slowing down, taking time to let a haiku find you.

What has most surprised you during the course of this undertaking, and why?

Haiku itself has been the most surprising element for me during this whole process and I feel utterly entranced by its world despite having chosen it initially with a very glancing understanding.

Through haiku I glimpse possibilities and moments of clarity, possibly beauty, definitely poignancy and humanity. Haiku makes me question, fires my imagination and I know has the potential to awaken the “writer” in us all. And here is the main thing for me: I see writing as a holistic practice beyond the traditional image of pen on paper. Sometimes assumptions about what writing is — and this can include who can write and who can’t — stop people being able to access “creative writing.” Choices in how we express ourselves are vital. Not everyone has a dedicated space to write in or is at a point that they feel confident in saying they can write. When we ask questions around subjects or themes this can unlock the world of writing for people and encourage individuals to value their view and feelings about the world around them. I am passionate about finding methods that create these keys which unlock creativity. On THE DAILY HAIKU, debates about haiku often revolve around whether to include images or not. I am keen to focus on acknowledging preferences in how individuals wish to express themselves. What is important is choice in how we want to express ourselves and encouraging each other to find ways that work for them. The VARK model is helpful here in understanding VISUAL, AUDITORY, READING/WRITING or KINESTHETIC learning and thinking. I think haiku, both brief but expansive, restricted but liberating, can embrace this holistic approach.

My motivation was and still is to spread a love of writing through haiku which I know will have enormous wellbeing benefits. My certainty of its benefits has proved well founded not least through the ongoing and generous feedback of our membership. UCL (University College London) conducted research during the initial Covid-19 period in the UK and produced some particularly illuminating results. The research crucially shows that creative activities increased by 24% across all demographics, and creative activities were identified as being the most effective way to foster wellbeing and positive mental health. I have been very excited by the levels of engagement, writing and creativity that has emerged from the group and just love its diverse worldwide membership. I look forward to more collaborations and getting everyone to have a go at writing haiku. 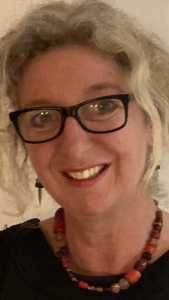 Amanda White is a writer of poetry including two full length collections published by Flambard, children’s books with Barefoot Books, travel writing for Time Out Guides, short films directed by Andrew Gillman and has also worked as a literary agent in London before moving to Cornwall where she has lived for twenty years. She also works as a teacher and creative practitioner in education, healthcare, community and corporate settings.

HAIKU BRIDGES is a periodic feature from The Haiku Foundation designed to encourage and communicate significant haiku outreach initiatives to new audiences. If you wish to inform us of any such initiative for a possible future post, please contact Scott Mason.