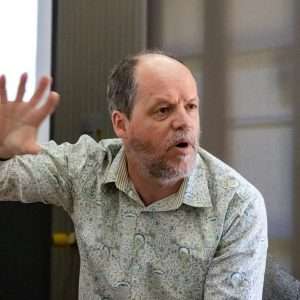 HAIKU BRIDGES is pleased to interview Owen Bullock from Australia as part of our “Haiku Bridge Builder” series, profiling the pioneering initiatives of individuals or groups who are bringing haiku and its related arts to new audiences around the world. Owen has been a trailblazer in the use of haiku as a therapeutic tool for psychic healing and an instrument of personal well-being.

Could you describe your work with Arts for Recovery, Resilience, Teamwork and Skills (ARRTS) and what led you to it?

I’ve always been interested in the cathartic and therapeutic potential of writing and so volunteered in 2016 to become a Creative Writing Mentor for the ARRTS program, which had been launched the year before. The program is based at the University of Canberra, where I work, and is run in partnership with the Australian Defence Force. Participants have been diagnosed with PTSD or anxiety disorders, and come from all three services, with the most recent programs also including Emergency Services personnel. Last year, we completed the eleventh program. The program has so far helped 246 personnel.

I mainly teach poetry, including haiku, and creative nonfiction. I co-teach with another colleague who focusses on fiction; we look at multimedia forms and a great variety of writing. Folks come into the program and choose from either Music & Rhythm, Visual Arts or Creative Writing. And so we have a whole month, working intensively, 9-4, five days a week with small group, though we take turns to lead one activity per day with the whole cohort. The program is tailored to the needs and interests of the participants. After the first week, when we have a number of teaching sessions, participants develop a project for themselves which they work on with our supervision. Usually at the beginning of the second week or thereabouts, I lead everyone on a haiku walk. Sometimes participants from the other streams join us, particularly Vis Arts.

What do you think it is about haiku that lends itself to this sort of initiative?

What I think works well about teaching haiku in this context is its immediacy, and the way it’s such a great model for using the senses in writing. It’s grounding, because writing haiku tends to be linked to experience of the natural world. We kick off by discussing some examples to inspire us. Then we walk beside nearby Lake Ginninderra to gather material. We come back to the classroom and write the more complete haiku on the walls – the room we work in is entirely coated in whiteboard paint. Being such a short form, haiku lend themselves to early forays into editing practice – what’s learnt can be transferred to other forms of writing, too.

I think participants relate to the grounding and mindful qualities of haiku. I’ve had a few discussions with participants about mindfulness. On the first program I did, a participant who’d been learning mindfulness strategies with their psychologist said, “what’s haiku if it’s not mindfulness.” As result of such conversations, I’ve been developing a research article about the link between mindfulness and haiku. Pre-Covid, we ran a letterpress workshop in which we typeset haiku in a group booklet; these are archived in the National library of Australia. [Read more about teaching haiku on the ARRTS program.]

Would you have any other haiku projects planned or underway that you could share with us?

At the end of last year I completed a project with the videographer Tim Brook, called ‘Call this moment’. It’s a collaboration of his images and my haiku. We started the process by my giving Tim haiku set in Australia that I’d published in the last five years. He chose those he thought he might work with. He gave me a repository of images and invited me to select freely what I wanted. He created images to go with my haiku, or found existing material. Responding to his photographs I felt I had to write in a different style to normal. So, I ended up writing haiku that were in the Gendai style: a little more imaginative and surreal. We worked on the model of text and image forming glancing relationships – to use a word often associated with the link and shift of Haibun – each had to include something the other didn’t. We left the final selection very much to Tim, because he was putting the video together. He assembled the work primarily through a colour palette, across the sequence of images. He has a wonderful technique called slide tape, where images gradually fade from one to another, sometimes with a third background image across the two primary ones, creating a form of animation, which is slow and contemplative and suits sensibilities of haiku. The colour palette being the guiding, organising principle, the more conventional but contemporary haiku and the Gendai-style haiku all got mixed up. In the end I think there were about 30 pieces used, and we’ve got a film that’s about 22 minutes long. We launched the film at the Canberra Museum and Art Gallery with a live reading to accompany the screening – Tim set up cues for me on a monitor so that I could recite in synch with the video. On the night, we showed short videos and films we’d made previously, and I performed longer poems and a selection of tanka that had recently been published in a collection. [Read more about ‘Call this moment’.]

There have been several progenitors to ‘Call this moment’, including two projects in collaboration with letterpress artist and book designer Caren Florance. Alongside archivist Louise Curham, we did a show called ‘Tracer’ for the You Are Here festival (Canberra, 2016). Caren printed the text of some of my haiku onto sheets of transparent paper – about three feet wide and six feet high – and Louise projected Super8 film onto those sheets, whilst I circulated between them, with the audience seated to one side, and recited haiku. Caren continued to stamp letters on these sheets and even on myself, since we were all in white PPE gear, during the performance. Later, she made a book of these giant ‘pages’, which is held by the Library for the Artist’s Book in Sydney; the haiku are reprinted in her PhD thesis. [Read more about ‘Tracer’ and in Caren’s PhD Thesis.]

Caren staged a show called ‘Signs of Life’ (2018), working with the poets Shane Strange, Melinda Smith and myself, where we displayed short form poetry on Virtual Message Boards around Lake Burley Griffin in Canberra for the Contour 556 festival. I chose haiku for my contribution. Each line could be no more than eleven characters, so I composed minimalist haiku that responded to the features of Bowen Park where my board was set up. Each poet’s work was on view for a week. We gave live readings at the sites to launch those weeks and I ran a haiku workshop. This was a lovely way of showcasing haiku in a very public space. [Read more about ‘Signs of Life’.]

I’ve been developing a form of writing that I call Fusion poems that takes the haibun as a model for other hybrid works. I’ve been working on variations of the kind since my PhD project (2017), and the Fusion poems have been the product of the last eighteen months or so. Whereas normally I experiment with a range of poetic forms and might keep things like lineated experiments, prose poetry, haiku and tanka and my particular use of found material separate, I bring all of these factors together in the Fusion poems (for example, see Otoliths 63). They tend to build into extended pieces, and I’ve recently published a single long Fusion poem called Impression as a 40-page chapbook with Beir Bua Press in Tipperary, Ireland.

I like to collaborate across art forms whenever possible, and I’m currently working with a ceramicist and glass artist called NOT, responding through haiku to his creations in both clay and glass.

The other thing I’m working on, which stems from my teaching (I’ve included haiku in several different undergraduate units), and a long-term interest in the subject, is an article which investigates the link between synaesthesia and haiku. I’ll be leading a workshop, ‘Haiku: Walking with the senses’, to explore synaesthesia as a technique at the Poetry on the Move festival, University of Canberra, 22-26 September. And I’ll be presenting on this topic as part of two online conferences in 2022: Haiku Down Under, 7-9 October, and Scriabin 150, which celebrates the birth and music of this Russian composer who was a synaesthete, 26-28 November.

Do you have any additional parting thoughts you’d like to offer?

Haiku is a tremendously flexible form which lends itself to variations and collaboration across disciplines. Its accessibility runs to audiences, who I’ve found to be warmly receptive to haiku in a variety of contexts and combinations. I’d encourage readers to experiment with related forms and artists from other fields whenever possible, as it broadens and deepens one’s enjoyment and understanding of haiku and its impacts.

Owen Bullock has published five collections of haiku, Summer Haiku (2019), River’s Edge (2016), Urban Haiku (2015), Breakfast with Epiphanies (2012), Wild Camomile (2009); a bilingual collection of tanka, Uma rocha enorme que anda à roda (‘A big rock that turns around’), translated into Portuguese by Francisco Carvalho (Temas Originais, 2021); three books of poetry, Work & Play (2017), Semi (2017), Sometimes the Sky Isn’t Big Enough (2010); the novella, A Cornish Story (2010), and a number of chapbooks of poetry, haiku and haibun. Originally from Cornwall, Owen lived in Aotearoa New Zealand for 25 years before migrating further to Australia in 2014, but he hopes to return to Waihi. He currently teaches Creative Writing at the University of Canberra. He has a website for his research into poetry and process. His latest publication is an article introducing a concept he calls ‘Tanka Intrigue’.

HAIKU BRIDGES is a new periodic feature from The Haiku Foundation designed to encourage and communicate significant haiku outreach initiatives to new audiences. If you wish to inform us of any such initiative for a possible future post, please contact Scott Mason.