Are you brand-new to haiku? Want to write one but you have no idea where to even begin? Welcome to New to Haiku! This blog post is for you.

Today, New to Haiku is pleased to welcome Jessica Tremblay, creator and illustrator of Old Pond Comics. Old Pond Comics is a cartoon featuring the adventures of two frogs in a pond: Master Kawazu and his young apprentice Kaeru who wants to learn haiku. The title of the cartoon is inspired by a famous poem by Matsuo Basho:

The old pond;
A frog jumps in —
The sound of the water.

After meeting haiku poet Basho, “Kawazu The Frog” becomes “Master Kawazu” and opens a haiku school right there in the pond. Jessica – with help from her amphibian friends – has put together this lesson to help people write their very first haiku. You can download the original .pdf copy of this handout – complete with comics – on her website.

What is a haiku?

A haiku is a short poem that describes, in only three lines, “what is happening in this place at this time” (Basho). It contains a word related to the season, and uses two images to give the reader a sense of wonder or aha! moment.

Most traditional Japanese haiku were written in 17 on (sound units), but when you write a haiku in English you don’t have to count syllables. Instead, try to write your haiku following a “short-long-short” pattern (meaning: the first line is short, the second line is longer, and the third line is short). Example:

Haiku is often called “one breath poetry” because the poem is so short that it can be said in one breath.

Be specific. “A flower” is nice, but if you write “a red tulip”, people will see the image better.

Most haiku will contain a word indicating the season. This “season word” in a haiku is called a kigo.

This doesn’t mean you have to name the season as in “autumn evening” or “summer rain”. Certain words naturally refer to a particular season.

Don’t use more than one kigo per haiku! One is enough.

A good haiku features two images. In English, sometimes the pause between the two images is marked by a dash or an ellipsis. . . But most of the time, there is a natural pause at the end of the line so you don’t need to add any punctuation.

The juxtaposition of two images is the key to creating an element of surprise, the aha! moment that triggers emotions in the reader. A good haiku helps us see the world in a different view.

Go for a haiku walk

Haiku poets always carry a small notebook in their pocket when they go on a ginko (a walk done in search of inspiration to write a haiku.)

During a ginko walk, observe what is happening around you. Use all your senses. Write down everything that you see, hear, touch, taste, smell. Anything that catches your attention.

Sometimes, a haiku will come to you already finished, in three lines, with two images. Sometimes, you’ll have a list of images, but no haiku yet. When you re-read these notes after your walk, maybe you’ll find a second image to complete the haiku.

Take a walk to the park. Observe the nature around you. What is happening now? Is there a dog running in the park? What color is he? What is he doing? Is he barking? Why? What do you see, taste, hear, feel, smell? Write it down.

Remember: A haiku is a short poem that describes, in only three lines, “what is happening in this place at this time” (Basho). 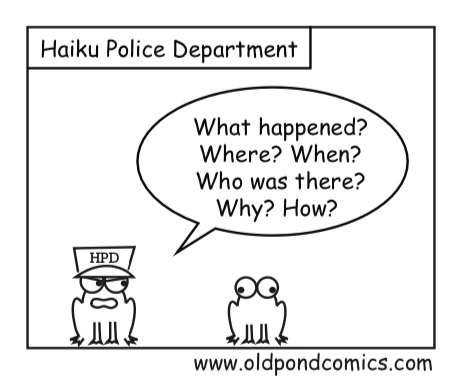 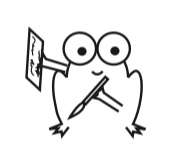 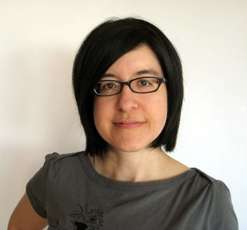 In 2007, Jessica Tremblay created Old Pond Comics to share her love of haiku.  The cartoons were published in haiku journals in Canada, United States, France, and Japan. She was the official cartoonist-in-residence at Haiku North America, Seabeck Haiku Getaway, Haiku Canada, and Haiku Hot Springs. www.oldpondcomics.com