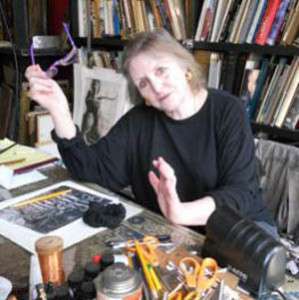 The Haiku Foundation honors the work of contemporary masters of the dual art of haiga: visual image wedded to haiku. This month’s featured artist is Ellen Peckham.

“Way, way back, when I was young, in the age of specialization, we were taught that the artist should concentrate on one medium: oil, sculpture, pastel, etc. and certainly should not presume to communicate in more than one voice. I remember being fascinated by Van Gogh’s letters, Blake’s prints with his poetry and philosophy and the work of other multi-faceted geniuses. But, listening to my masters, I accounted these flukes beyond the normal range of living mortals, certainly of a female. So when, little by little, I became aware of the duality of expression by artists of both genders, I broke from my cultural limits and began to include and to publish separately my poems and a few essays. Recently poems have appeared in the United States, Japan, Great Britain, Peru, and other countries. I use the two voices alone or layered. Sometimes the words – my own or those which have spoken especially clearly to me – are included in the visual art as subject, as gloss, as decoration. Other times there are poems and visual pieces created together but not produced as one. And occasionally drawings or prints or collages are added to the printed word as small grace notes, related but not included in one work. Two volumes of my haiku and haiga (the art in which the poems appear) are being collected in editions of 7 each. When first asked to give readings, as aside from mounting poems at an exhibit or publishing them, I balked. Now it is a joyful aspect of the total, akin to hanging my work on a wall, and the interaction is exciting and informative. To my great pride, The Harry Ransom Center For The Arts at the University of Texas in Austin is creating an archive of my drafts, published work and art.”