This is the final part of Envoy 1.
Thanks again to everyone who participated for sharing their time and thoughts.
Additional translations, comments and interpretations are always welcome. 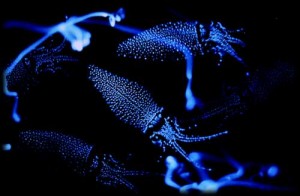 From what I know about bankers and office spaces in Japan, the squid became, in my mind’s eye, the fluorescent lights. It seems to me there is a good deal of space in this for interpretation of meaning into English, based on the Japanese (mainly the last 2 lines). I’m not sure I would be inclined along the lines of ‘fluorescing like . . .’ as I think the subject — bankers — didn’t strike me as something that would need that kind of description.

Even in Japanese, this haiku is wordy. Since the word “fluorescence” is a “big” word for an English-language haiku, I used “early morning light” and “blue glow” to recreate the juxtaposition in a light manner. My son, living in Japan, notes that it may be a blue light because of the blue light of squids in Toyama Prefecture.

Like Hiroaki Sato I do prefer the one line haiku translations. I think it helps create the sense of movement and ambiguity that is often in the originals. I’m not too concerned about syllable count as long as it is not over 17-ish syllables. The argument about the amount of information carried by an English syllable and a Japanese one does not seem convincing to me. You can pack a great deal information into each Japanese syllable if you choose to do so.

I chose ‘squid’ over cuttlefish, because the topic is ‘bank workers’ and ‘squid’ has ‘quid’ hidden in it.

I chose the word ‘shed’ because it can also mean deflect and the bank workers passively deflect the fluorescent light in their work places.

I chose to stress the ‘early’ morning as I think the intention of poem is to stress the length of time the bank workers work, beginning as they do just after dawn. This puts them in an oppositional relationship to fireflies (蛍) which come out at twilight. (There are two magical, glowing creatures hidden in this haiku – both creatures of the dark, making their own glamorous light.)

Bank workers might be said to live in the ‘darkness’ of the money economy, which prevents them from getting out into the normal pleasures of the weather etc. There in the bank from morning to night, they handle money and make more money: Money, which in its weird and slightly sinister way, lights up our lives and our eyes. Money which, due to its association with gold, glows in yet another way in the ‘darker’ recesses of our minds. A great haiku for the financial crisis! 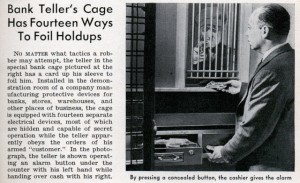 On second thought, I wonder if this might be better:

From early morning
These bankers have been working
Like the shining squids.

My reading: The haiku depicts the bankers working under the florescent lights like the squids swimming in the deep water. 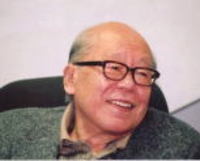