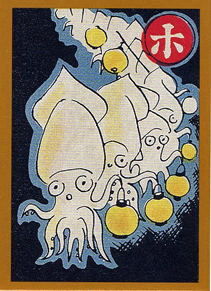 When it came to my attention that Kaneko Tōta had won the prestigious Masaoka Shiki International Haiku Grand Prize for 2008, it seemed fitting (and exciting) to begin this series with a haiku by him, especially since his work is not well known in the west.

Kaneko Tōta was born in Saitama Prefecture, Japan, on September 23rd, 1919. Since 2000, he has been the Honorary President of the Modern Haiku Association (Gendai Haiku Kyokai). To quote some of the short biography that accompanied the announcement of the Shiki Award:

“Kaneko Tōta is one of the most active post-war authors. Realizing more faithfully than anyone else one of Masaoka Shiki’s original ideas that ‘Haiku is part of literature’ (‘Haikai Taiyo (Essentials of Haiku)’), Mr. Kaneko voluntarily took the initiative in advocating and stressing the importance of sociality, plasticism, and avant-garde qualities in haiku poems. His campaign marked one of the landmark events in the post-war haiku history, which deeply penetrated not only a limited number of schools but the entire haiku population. This is exemplified by the fact that, although avant-garde haiku tends to be labeled anti-traditional, Mr. Kaneko’s efforts have, on the contrary, inspired and animated classical haiku to an undeniable extent. His pursuit of avant-garde qualities in haiku actually helped clarify what traditional haiku has endeavored to achieve and, as a result, gave birth to a new movement of classical haiku. Mr. Kaneko has been devoted to nouvelle haiku, without losing respect for popular poets such as Issa Kobayashi or other wandering haiku poets, as well as for indigenous poems associated with his own hometown Chichibu.”
What this award immediately prompted me to do was begin a careful rereading of Makoto Ueda’s Modern Japanese Haiku: An Anthology (University of Toronto Press, 1976) — the only place I knew of that had in it a substantial selection of his work (Tōta is one of twenty-one 20th century Japanese poets featured inside it). For me, this publication seems like a landmark, and something one could and should often return to for possibilities and directions in haiku writing — a tremendous source of inspiration. Initially, I was drawn to featuring translations and commentaries of this haiku by Tōta:

After a heated argument
I go out to the street
and become a motorcycle.

As much as I love it (and as important as it is, I’ve been told, in the evolution of 20th century Japanese haiku), there was a different one that seemed to call out more for attention, especially with everything that was and is going on in the world financially: domino meltdowns, endless bailouts, takeovers, bankruptcies, restructuring, massive and ongoing debt, credit, unearned bonuses, the housing bubble, the shifting of worthless paper, lying, deceit, misleading, Ponzi schemes. Not to mention wars being waged, continued, shifted, ignored — all of which is undoubtedly linked to the world economy, national debts, and the military industrial complex. In a nutshell: money/profit first, people last. In a word: greed. All of which is affecting the entire world. In this context, the Tôta haiku I’ve chosen for this first installment seems timely as ever, and therefore is able to breathe new life, gaining new energy and meaning.
What follows is not just the poem in translation but an entire menagerie of translations and commentaries on it from different poets and scholars. This installment began small, but quickly grew to have a life of its own. Because of its size, I have decided to split it up into a few parts. I can’t thank those who contributed to this posting enough for their thoughts and time. I encourage anyone reading this to have a go at translating it themself, and to offer any other light that can be shed upon it. 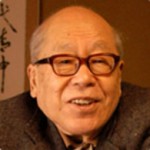 Like squids
bank clerks are fluorescent
from the morning.

from the morning the bankers illuminate fluorescent lights like squids 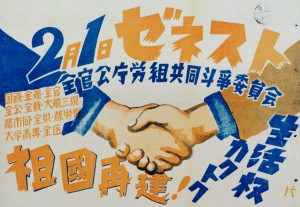 into the morning bank clerks glowing fluorescent as squid

(Note. This haiku is jyûritsu [‘free-rhythm’], is muki [non-seasonal], and contains no kireji. In our commentary, we have adapted these materials and added original historical and biographical research to create the English text.)

The General Strike date of February 1, 1947 was a significant moment in postwar Japanese history; the date on which Japanese unions called for a general strike against General McArthur’s wishes. It was on this date that Kaneko Tōta, after experiencing 15 months as a prisoner of war, having returned to Japan, re‑entered his union post at the Central Bank of Japan: the day of defeat for the worker’s movement.

In 1948, Tōta became the Representative Commissioner (daihyô iin) of the Workers Union in the Central Bank of Japan (Nihon Ginkô jugyôin kumiai), and in 1949 became the first full-time Director-General (jimukyokuchô) of the Union, dedicating himself to supporting the Union in all of its activities. Moreover, he acted as a member of the Federation of the All-Bank Workers Union (zenkoku ginkô-in kumiai rengô-kai). However, in 1950, both the Korean War and the Cold War began. As a result, he was “Red-purged” from the main office of the bank, and sent to work in a small branch bank. This was where ‘fluorescent squid’ was composed. (Cf. Kaneko Tōta, My Postwar Haiku History [waga sengo haiku-shi], Tokyo: Iwanami-shoten, 1985.)

Kaneko wished to compose a haiku about bank clerks, and has described an aspect of his compositional process. There were soroban (a Japanese abacus used for calculation), bills, and other materials in the bank. Contemplating such bank objects, he was h
owever unable to express the  “perplexed and tattered emotions” of the bank clerks, including himself. Additionally, whether he were to write a haiku from “a damned situation or blessed state,” he felt that such a haiku would end up either as a sermon on the one hand, or on the other an expression of logical prose.

When Kaneko composed ‘fluorescent squid,’ he writes, “In the gloom, the people in the bank settled in my mind as the image that each squid has a lonely fluorescence, and is a fresh, fishy creature of the sea with feelers.”

(The above is only an excerpt. To read the entire essay, please go to the May ’09 issue of Roadrunner)
-Itō Yûki & Richard Gilbert 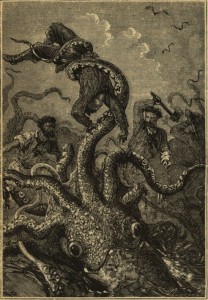