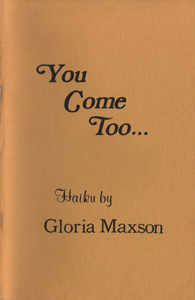 Gloria Maxson was widely published in the journals of rhe 1970s, and this volume (Triton Press, 1976) captures the style of the poems of the time: nature-infused, three lined (and often stair-stepped), aiming-at-17-syllabled, punctuated and capitalized “moments.”