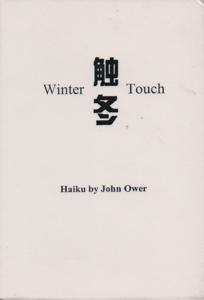 John Ower came to haiku late in his writing career, one in which he published long poems and literary articles, along with teaching English at the university level. As with many such writers, he was attracted to haiku by its sensibility, its (seemingly unironic) acceptance of the world as it is, its association with austerity and beauty. These are the characteristics he strove to place in these, his most straightforward poems (Hub Editions, 2001).