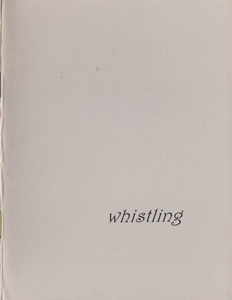 Carolyn Thomas, or, as she favored, “Season,” founded and edited Heron Quarterly of Haiku and Zen Poetry (not to be confused with another Heron Quarterly) in the late 1990s, and has published several several chapbooks through her Thinking Post Press. This one (2000) is perhaps typical, with its emphasis on moments of insight, or, as she puts it, “the pause between breaths.”