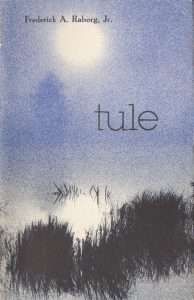 Fred Raborg was one of the drivers of haiku (and other) literature at the end of last century. His Amelia Press produced the journal Cicada (and vehicles dedicated to several other genres) as well as one of the first chapbook contests in the genre. tule (Amelia Press, 1986) shows him as a poet of his time — many of these poems seem word-logged, but we know he streamlined things as he matured. Here’s a taste, then, of what haiku were like in the 1980s.