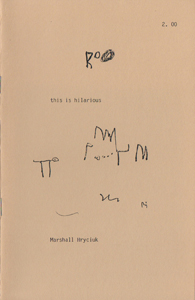 Marshall Hryciuk has long enjoyed a reputation for disrupting the comfortable flow of the haiku (and any other) world. Proof that his irreverence (much of it self-referential) dates back decades can be had from his first writings, such as this early chapbook, from Unfinished Monument Press in 1985.