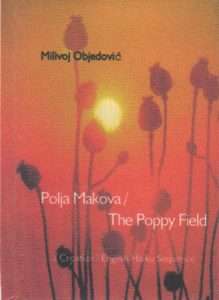 Milivoj Objedovic is a poet from Bosnia who escaped the deteriorating conditions of Yugoslavia in the 1990s and settled in the Netherlands. He founded, with Wim Lofvers, the groundbreaking journal Woodpecker in 1996, and produced this small collection (’t Hoge Woord, 2001), one of the Radijs series, shortly thereafter.