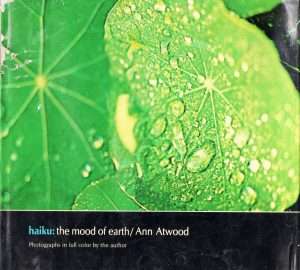 Ann Atwood was a photographer first and a poet second, but she was very keen to intertwine her two arts, and did so in a series of beautifully produced cloth-bound books in the early days of the haiku movement. the mood of earth (Charles Scribners Sons, 1971) is a good example of just how she worked, the images coming first and suggesting words that might extend them. Perhaps too telling for our later tastes, but groundbreaking in their time.

Haiku featured in the Book of the Week Archive are selected by THF president Jim Kacian, and are used with permission.

Ann AtwoodBook of the WeekThe Haiku Foundationthe mood of earth